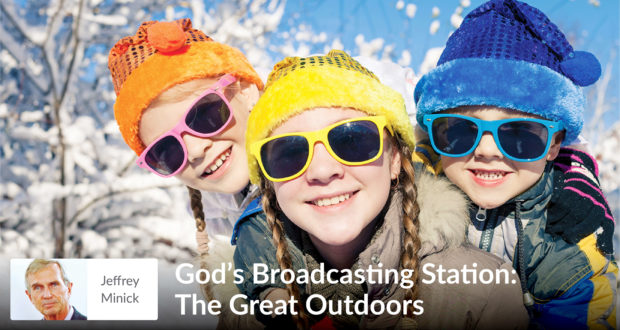 When I taught homeschool seminars in Latin, history, and literature in Asheville, North Carolina, I would wait for a cold spell in February and then email my students to come to class dressed for the weather.

On their arrival, I would lead them outside and hold class for half an hour beneath gray skies and temperatures well below freezing.

With any luck, we might even find some bits of falling snow. The students would stand shivering in the cold—some of the boys apparently considered t-shirts and shorts appropriate winter clothing—and then we’d tromp back into the classroom.

“Now,” I’d tell them when they had settled at their desks, “I have just given you a gift: lifetime bragging rights. Someday when your own children whine that they can’t do their schoolwork because the house is a little chilly, you can say, ‘Are you kidding me? Why, when I was your age, I was outside in a snow storm chanting Latin declensions and reciting Shakespeare.’”

I thought of those days when reading Linda McGurk’s There’s No Such Thing As Bad Weather: A Scandinavian Mom’s Secrets for Raising Healthy, Resilient, and Confident Kids. Written after she married an American and moved to Indiana, McGurk urges American parents and schools to allow children more outdoor time and more opportunities for free play and risky activities.

In her native Sweden, for example, nearly everyone practices friluftsliv, which translates roughly as “open air life.” Moms often allow their babies to sleep outside the house in their prams in thirty-degree weather, and Scandinavian schools give students much more time outdoors than American public schools.

Many of our schools, public and private, restrict such time either by cutting down on recess or by assigning their students burdensome homework.

Such practices, combined with the hours many young people spend in front of a television or computer screen, have contributed to obesity, rising diabetes, and ADHD in American children, who are also three times more likely to be medicated with stimulants and anti-depressants than their European counterparts.

Unlike students in formal school settings, homeschooling families operate under no such constraints. Greater flexibility in their schedules allows for outdoor excursions, in good weather and bad, for their children.

Three benefits accrue from more time spent outside the house.

The Benefit of Health

As already noted, the first of these benefits is health. Walking in the fresh air, hiking, bike riding, games ranging from badminton to hide-and-seek, gardening, nature walks, reading poetry or stories aloud on the patio: such activities relieve stress, help keep off the pounds, strengthen our bodies, refresh our minds, and lead to a deeper appreciation of the physical world.

Getting outside, especially in the winter, can prevent infections and colds. According to some researchers, mucking about in the dirt also helps children develop stronger immune systems.

The Benefit of Imagination

In addition, unsupervised time outdoors arouses the imagination of children. My daughter’s children, for example, are outside nearly every day, building forts, playing at Rembrandt with their sidewalk chalks, inventing games, and riding bikes.

Recently three of them, ages 8, 6, and 4, spent an afternoon tying a rope to a bucket and lowering it from the patio to the entrance of my apartment eight feet below. The purpose of this game? I have no idea.

I watched toy swords, balls, and plastic baseball bats go up and down in the bucket, and decided, wisely I think, to observe rather than to inquire. They were animated, cheerful, out in the sun and the wind, active. An intrusion might bring an end to their play.

The Benefit of Risk-Taking

Risk-taking is another benefit of outdoor play. Many commentators believe we have gone too far in trying to eliminate risks in childhood. In several locations, library patrons can squirt a viscous liquid from a plastic box to sanitize their hands.

In the parking lot, a Catholic homeschool mom helps some children from a van whose safety seats make the car’s interior look like an Apollo spacecraft. The basketball courts of the park beside the library are generally filled with teens and young adults shooting hoops, but the playground is about as exciting for children over four as a lesson in calculus.

In There’s No Such Thing As Bad Weather, McGurk points out that Scandinavian parents and teachers are much more willing than Americans to allow children to take risks. At school recesses, which are long and frequent, students skate, ride toboggans and sleds, and play in the snow. Many elementary school students walk or ride their bikes to school.

In his best-selling Twelve Rules For Life, Jordan Peterson also advocates for unsupervised playtime and risk-taking. In his chapter titled “Do Not Bother Children When They Are Skateboarding,” Peterson applauds parents who permit their kids to ride skateboards, climb trees, and play rough games.

“Kids need playgrounds dangerous enough to remain challenging,” Peterson writes, in large part because by testing themselves these children, particularly boys, are learning a lesson in adulthood: overcoming obstacles.

Of course, to enjoy these benefits, homeschoolers must allot the time for outdoor play and exploration. Too often, especially in families with many children, the schedules and the children’s activities—dance, sports, music—can eat up the days.

(I once knew a group of homeschooling mothers who referred to themselves ironically as “van school moms,” because they spent so much time driving children to various classes and sports events.)

So here are some tips for those hard-pressed to find opportunities to get your children out of the house and into the great outdoors.

Whether you live in Manhattan, New York, or Manhattan, Kansas, get the gang outside. Many others more qualified than I will give you the same advice. As Saint Bernard of Clairvaux once said, “What I know of the divine sciences and Holy Scriptures, I learned in woods and fields. I have no other masters than the beeches and the oaks.”

A great American, George Washington Carver, beloved by me for helping to refine peanut butter, reinforced this sentiment:

“I love to think of nature as an unlimited broadcasting station, through which God speaks to us every hour, if we only will tune in.”

Put aside some time every day and listen to God’s broadcasting station.