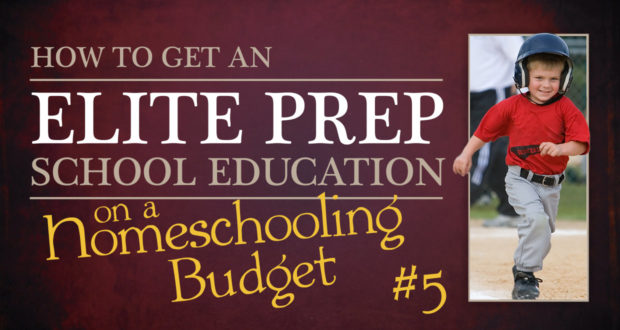 10 Reasons Why Homeschoolers Should Play Sports

by Ginny Seuffert | I’ve been touting the benefits homeschooled students derive from sports and exercise for years. Let me share ten of the best reasons to get your kids moving.

This is the 5th article in the series How to Get an Elite Prep School Education on a Homeschool Budget.

Faithful readers might recall that my last several columns list the attributes that master teacher John Taylor Gatto has identified in exclusive private prep schools and how they prepare their students to assume positions of leadership in academia, government and business.

We can inculcate many of these practices into our home schools, and thus prepare our Catholic children to move into positions where their faith formation can make a real difference to society.

Gatto’s fifth theme is that students in elite private prep schools are encouraged to play “energetic” sports. I’ve been touting the benefits students derive from lots of fresh air and exercise for years, but I have to admit that Gatto gave me a new insight.

Let me share seven of my own best reasons to get your kids moving and then I’ll reveal the three reasons that Mr. Gatto gives. (Just to define some terms here, “energetic sports” include both playing on an organized team, like Little League or AYSO soccer, as well as badminton or flag football on your side lawn. It might also include energetic arts, like marching band or dance.)

In 2009, Researchers at the University of Illinois at Champaign, Urbana, looked at the effect moderate exercise has on 9 and 10-year-old boys and girls.

They observed that after just 30 minutes of moderate exercise walking on a treadmill, the students performed better on both academic and cognitive testing.

My own experience confirms this finding.

When children run around, get their blood pumping, and fill their lungs with fresh air, they seem better able to concentrate and apply themselves to the task at hand. In former times, children got plenty of exercise walking a few miles to school and doing their chores.

Now we need to provide it in a more purposeful manner

A figure skater may fall on the ice a hundred times before landing an axel. Basketball players spend hours in front of a hoop practicing their shots.

Budding fielders practice throwing and catching until they perfect getting the batter out. A desire to excel at a particular sport requires hard work, discipline and focus: qualities that also lend themselves to leadership.

3. Learn to Win and Lose Graciously and Keep it in Perspective

My Chris’s 13-year-old Pony League team came in first in the state competition. The following year, despite all their talent and hard work, they took second place.

This was a big disappointment for the boys, but after the final game, they shook hands with the victors and congratulated them.

Sportsmanship discourages being a sore loser, a particularly unattractive trait in sports, business, and life.

After the game, we all went out for ice cream. After all, there are real problems in the world: children dying of preventable diseases, Christians martyred for the faith, and whole countries living in famine.

A lost baseball game is no big deal. Being able to see the big picture helps one develop a gracious attitude.

4. Learn to Play by the Rules

No matter what, three strikes and the batter is out. No amount of whining gets him a fourth strike. A figure skater cannot scoot around the ice on her backside and call it a spin. No player can touch a soccer ball with hands except the goalie.

Organized sports are pretty rigid. Every member of the team plays by the same rules; even an uncoordinated first baseman has to catch the ball. Children learn that rules apply to all, and success follows those who follow rules.

Read Farmer Boy by Laura Ingalls Wilder to learn how hard a nine-year old had to work on the family farm in the 19th century. Little Almanzo had to wake before daylight to labor at his chores, walk over a mile in the icy upstate New York winter to school, walk home again as dusk descended, and then do his evening chores without even entering his home for a quick snack.

By contrast, school-age kids today have an awful lot of time on their hands.

Too often they fill it by staring at a TV or computer screen watching useless nonsense. Idle hands are the devil’s workshop and as they get older, bored kids often find trouble. Sports offer a wholesome and healthy alternative.

Certainly, superior nutrition plays a role, but without doubt, playing at sports helps fight the fat. Shut the TV off, disconnect the video games and get those kids moving. High energy levels, a product of good health, are essential to success.

7. Play to the Crowd

It’s the bottom of the ninth with bases loaded, as the batter approaches home plate. Both the pitcher and batter will give it their all, and the fielders will be ready to make a play. In just a few minutes, one team will be thrilled and the other dejected, and all of this takes place in front of a crowd.

This situation, and thousands of others in team sports, teaches kids to give their best in front of an audience that may or may not be friendly.

In a similar way, leaders in government and business need to be able to pitch their ideas to a crowd, all the while keeping their cool.

My girls played softball, and every so often one would get “stitched”, hit by a pitched ball. Spectators and teammates would encourage them to “shake it off” because “there’s no crying in softball.”

Everyone claps when an injured player gets up and walks off the field. Learning to calmly deal with pain and persist is a trait that is useful in every walk of life, and Gatto considers it essential in a leader.

9. Learn to Deal with Emergencies

The starting quarterback is injured, and the team has to get by with his replacement. The umpire calls a wide strike zone, and the batters have to adjust.

The unexpected crops up all the time in sports and everyone must simply deal with it. The ability to think on one’s feet and adjust quickly to changing circumstances is crucial in a potential leader.

10. Learn to be a Calm & Confident Leader

“Energetic physical sports are not a luxury, or a way to ‘blow off steam,’ but they are absolutely the only way to confer grace on the human presence, and that grace translates into power and money later on.”

Of course! Why didn’t I think of that?

We have all seen this grace in soldiers whose physical presence has been honed by vigorous training and the Manual of Arms.

True leaders dominate a room when they enter it — by their very presence. People pay attention to them. They attract the notice and loyalty of those around them by their calm, confident demeanor.

They possess a control of their body and emotions that they learned through years of playing physical sports. They are leaders.
[ginny-bethisway-book]