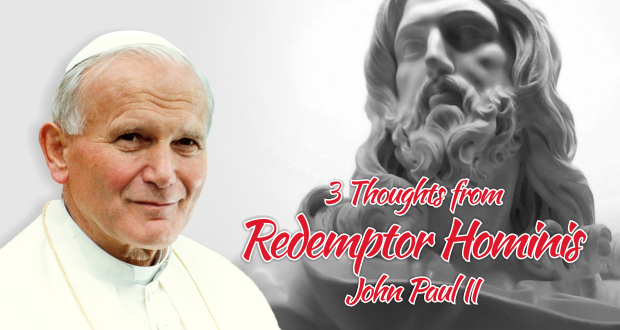 As the world prepares for the canonization ceremony of Blessed John Paul II on April 27th, it would be helpful to explore some of his written words and see where they can be helpful in our daily lessons with our children and students.

During his long pontificate, John Paul wrote fourteen encyclical letters and though at times the writing is very dense, this should not intimidate us from using his material as we teach our young people about the beauty and truths of our Catholic faith.

My goal is to write a short article on each of the fourteen encyclical letters and try to offer three or four main lessons that we can use in our teaching. I plan to discuss these lessons with our Confirmation candidates in our home parish. There is no better place to start than with John Paul II’s first encyclical letter The Redeemer of Man (Redemptor Hominis) which was promulgated in March 1979.

1. The Fundamental Dignity of the Human Person

“The truth is that only in the mystery of the Incarnate Word does the mystery of man take on light… He fully reveals man to himself and brings to light his most high calling” (RH 8). “Human nature, by the very fact that it was assumed, not absorbed, in Him, has been raised in us also to a dignity beyond compare. For, by his Incarnation, He, the Son of God, in a certain way united Himself with each man” (RH 8).

In a century that featured unimaginable crimes against the dignity of the human person, John Paul teaches us that man has an incredible majesty that cannot be taken away by any government or institution. That God become man speaks of God’s immense love for each one of us and also for how inconceivable is the splendor and eminence of every human being.

When we discuss and encourage our children about performing the Corporal Works of Mercy, we can reinforce this theme of the dignity of man. Man created in the image and likeness of God and redeemed by a God that became a man like us in all things save sin. That Christ became a man demands a response from each of us in regards how we treat our brothers and sisters.

We are pro-life not out of some political worldview. No, we are pro-life because the God, who created us and formed us in the womb, became one of us to redeem mankind from the shackles of sin and death. As Lent approaches and we speak with our children about performing works of charity during this holy season, we remind them that we do these good works because the least among us has an unimaginable amount of dignity in the eyes of Jesus Christ. Our gaze needs to be always fixed on Christ for there is salvation in no one else.

One of the most beautiful lines in the encyclical reflects on the dignity owed to man: “Man cannot live without love. He remains a being that is incomprehensible for himself, his life is senseless, if he does not experience it and make it his own, if he does not participate intimately in it” (RH 10). The Pope states that every authentic humanism is closely connected with Christ.

The horrors of the 20th century stem from a fundamentally flawed understanding of human freedom. John Paul states that man’s true freedom is not found in various systems and what individuals propagate as freedom. Christ is the one who brings us freedom based on truth and frees man from what curtails, diminishes and breaks off this freedom at its root, in our soul (RH 12). In reflecting on Christ’s words that you will know the truth, and the truth will make you free, the Pope states there is a fundamental requirement and a warning – the requirement is an honest relationship with freedom lived in truth. The warning is to avoid all of the illusory freedoms that the world offers us that fails to conform itself to the truth about God and man (RH 12).

We can mistakenly think that if our children are raised in good Catholic homes the culture can be locked out and not let to enter the premises. However, we cannot padlock the culture out of our homes especially in an age of instant communication.

We must constantly teach our children that freedom must always be allied to what is true and good. In choosing the good, the authentic use of human freedom will allow human beings to be truly happy in this life and to be united with Christ in the life to come. There are so many illusory freedoms that can be found right within our community and with the internet even within our own homes. People will abuse drugs, alcohol, sex, violence, pornography and unbridled materialism thinking that this “freedom” will bring happiness. These are lies and illusions that quickly will lead to wanting new things when our thirsts have not been quenched.

The reason the world lives in so much fear is that we have separated freedom from truth. Freedom has come to mean either whatever I want to do I must be allowed to do (and even have tax dollars pay for them) or who holds the most power decides the limits and boundaries of freedom. John Paul preaches Jesus Christ, he that is the way, the truth and the life, stand with every man who has been judged for the sake of the truth.

3. The Right to Religious Freedom

In a country in which the debate about freedom of conscience and religious freedom rages on a daily basis, examining John Paul’s discussion of religious freedom is essential (Kevin Clark wrote a wonderful recent article discussing this very issue: Smoking and Religion: Two Things You Can’t Do in Public). The Pope states that the curtailment and violation of religious freedom are in contrast with man’s dignity and his objective rights. John Paul is speaking of Communism when he discusses an ideology that treated believers as second class citizens or entirely deprived them of their rights as citizens while upholding the tenets of atheism (RH 17).

Today, in our own time, religious liberty is under attack by those that want to force Christians to do things that oppose our moral conscience. Society continues to take religion out of the public sphere and wants to confine believers to a separate plane of existence. The late Father Richard John Neuhaus wrote a book title The Naked Public Square in which he prophetically called out modern cultures attempt to banish all religion from public life and discourse.

We must teach our young people that religious freedom is an inherent condition of humanity. We must not accept as fact that we will be shut out of the public square and our convictions marginalized as irrelevant to the modern world. We cannot abandon the public square and leave it entirely to those who would destroy it.

We must never depreciate ourselves to small enclaves and shut ourselves up from the outside world. We must preach Jesus Christ crucified to a world that desperately longs for his message. More and more our young people will be looked upon unkindly by a world desperate to uphold the tenet of tolerance at the expense of the truth. Like our Savior, we cannot abandon the world and hide in our own bunker waiting for things to change.

We need to be the heart and hands of Christ out in the soup kitchens, protesting at abortion mills and in our communities shouting that our voices will not be removed from public discourse.

In John Paul II we have the model of truth lived in freedom. He lived through failed ideologies that suppressed freedom and truth to become only a will to power. He warned about the new totalitarianism that has separated freedom from truth and believes freedom to be only what brings one the greatest pleasure.

We need to boldly and without fear remind the world that this view of freedom has brought about indescribable amounts of unhappiness and despair.

John Paul II closes his first encyclical by placing his pontificate under the maternal protection of Mary. He links the maternal love of Mary with the love the Church has to each and every man. “Through her maternal presence the Church acquires certainty that she is truly living the mystery of the Redemption in all its life-giving profundity and fullness” (RH 22).

We must teach our young people to bring their hopes and desires to Mary and place them at her feet. She will help draw us closer to her Son: A Son that so loved the world that he became man to save each one of us from the chains of sin and death.

This is the First in a Series of Lessons for Youth From St. John Paul II’s Encyclicals