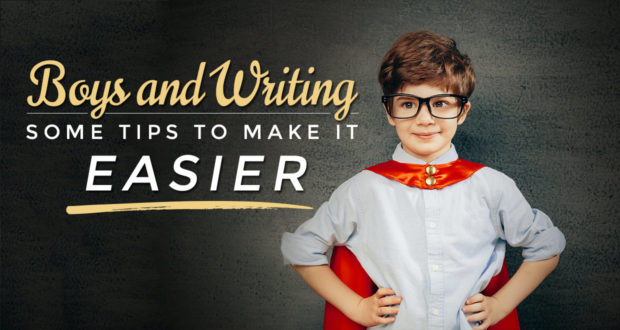 Boys & Writing: Some Tips to Make It Easier

Mary Ellen Barrett gives some great advice in dealing with frustrations that mothers had with boys & writing. Here are some great ideas to help!

One of the most often expressed frustrations I heard this summer while working at the various IHM Homeschool Conferences was the trouble mothers had getting their boys to write and to write well.

Most young boys are not really wired to sit still for any length of time and articulate ideas in a thoughtful and purposeful way.

I know, you’re shocked. Your sons would rather be tearing around the house and yard like wild things or sword fighting or building Legos than writing a book report; it’s no big surprise to anyone who has ever come in contact with a boy, even if only for a few minutes.

So how do we encourage the boys not only to write, but to write well?

It’s not impossible, and it can actually be very enjoyable when approached from an angle of not only teaching them to write, but also encouraging their passions.

It can begin as young as kindergarten, and you can foster a lifelong love of both writing and storytelling while also making wonderful memories together.

Keeping in mind the particular learning style of the child will also go a long way toward eliminating the pain involved with writing (more on that below).

Another thing to remember when the frustration level is climbing is that writing is a learned skill, one that requires practice over a long period of time, and will not be accomplished in one afternoon, one week or even one year.

You would not expect your child to become a concert pianist in one semester, so to expect a prolific writer in that amount of time is to set everyone up for failure.

There are specific issues that are particular to boys and writing. Boys, especially young ones, are doers and movers.

Developmentally they are simply wired to be less sedentary and more active.

This is perfectly normal and, actually, a very good thing. Boys need a lot of fresh air and exercise in order to develop into healthy, normal men.

Boys also are slower developing fine motor skills, which is again perfectly normal; however, an entire cottage industry has grown out of trying to force boys to develop before they are ready. This stems from public school standardized testing beginning in kindergarten and including a fine motor skills section.

Of course most of them do poorly, so parents hire occupational therapists at an average of $135 and hour to “catch them up” when, in reality, they are not behind at all.

So how do you encourage writing when your child is uncomfortable or clumsy holding a pencil? You begin with encouraging storytelling. The easiest way to do that is to ask the child to tell a story in his own words.

If you’ve read him a storybook, ask what the story was about. Ask a specific question or two, but mostly let him retell you the story.

It’s called narrating, and it helps develop comprehension, attention and the skill of putting together the order of a story; beginning, middle and end. This habit can be half the battle in later years.

You can also ask your son to tell you his own stories, things he did at the playground or at his little league game or at an outing with Grandpa.

If you want to make it special, sit at the computer and type it up as he tells the story; don’t correct, just let it be his own words. He can then sign his “work” or even illustrate it. Keep these stories in a binder and show them off to Grandma when she comes to visit. Make it his book.

When a child is comfortable holding a pencil and writing words it’s time to take more seriously how he learns. Then encourage writing in that style.

There are three basic learning styles: visual, kinesthetic and auditory.

They need to watch something happen in order to understand how it works. They think in pictures.

To get the visual learner writing, it is important to take into account the pictures that the words make.

A good way to start would be to ask him to draw a comic book, first the pictures and then the words. Inspiration could be good comics and graphic novels such as Tintin, Calvin and Hobbes, and the graphic novel versions of A Wrinkle in Time and the Boxcar Children.

Once the habit of writing a story is established, encourage your children to visualize what they are going to write before they write it.

If they are writing a book report, have them describe to you the scene they are thinking of and then help them articulate it in a rough draft. Then polish, polish, polish. It is perfectly fine for this to take several days.

Try limiting it to fifteen or twenty minutes at a time to keep the possibility of a meltdown to a minimum. Encourage lots of descriptive words to make the word pictures come alive.

The first few times this can be a little tedious, but the foundation of storytelling will help smooth it along a lot better than had you not spent the time initially.

2. Kinesthetic learners learn best when their bodies are involved; they are very hands on and learn best by doing.

To encourage these children, have them start with lists. Have them list the steps they took in building a particular Lego creation, or how they built a sandcastle, or what steps they took in packing for a camping trip. This connects the writing and the doing for the kinesthetic learner.

You can then proceed to more abstract lists. For example, if there is an essay assignment that is titled “A Trip to the Mountains”, ask the child to go through the motion of planning a trip to the mountains.

Have him look up places online, research activities, find the suitcases, plan a shopping trip for appropriate clothes and map the route. Then write it as a list in chronological order. That is your rough draft.

Encourage lots of verbs and active types of scenes. Ask, “Then what will we do?” often.

They can assimilate knowledge more easily when it is read to them rather than when they read it to themselves.

These kinds of early writers do very well with the narration method described above. This can continue throughout the early and middle years of schooling.

Encourage the auditory learner to interview people. They are great at newspaper-type writing.

Wouldn’t it be fun to have a family newspaper? Or maybe a newsletter for your homeschool group. How about writing a family history whereby they can speak to relatives and record the answers?

When it comes to writing book reports, auditory learners also do very well when the books they are reading are supplemented with audio books.

Audio books are not to replace actual reading but can help auditory learners have a deeper comprehension of the material.

To encourage writing in the auditory child, you can ask them to tell you what they are going to write and record it into a phone or other device.

Then have them plug in the ear phones, teach them about the pause button, and have them type out what they said. This is the rough draft.

If it needs to be handwritten in the final copy; that’s fine, right now we just want the initial spitting out of the information to be as painless as possible. After the first draft is typed, you guessed it: polish, polish, polish in short bursts over a few days.

Not every kid is going to end up loving to write and that’s fine. What you want is a certain level of competence as well as an acceptance of the fact that writing assignments are inevitable and it makes sense to make the best of it, to do your best the first time, and to try very hard to include things that are meaningful to you.

The latter makes writing a great deal less painful for everyone and could actually foster a love of the process that carries on for life.

Isn’t that worth a little tedious plugging in the beginning?

You may also like these articles by Dr. Mary Kay Clark: