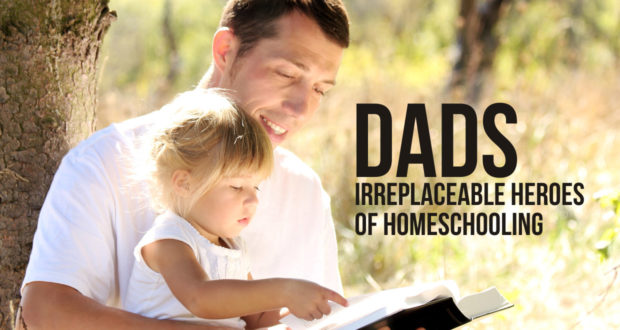 Out there, Dads seem to have acquired rather a poor reputation. They’re inadequate, bumbling, and terribly prone to mistakes. They don’t know who they are, lack responsibility, and couldn’t begin to earn your respect.

Out there, Dad is really unimportant, and generally in the way. At least, that’s what you’d think if all you ever did was watch TV shows or otherwise listen to the popular culture. Meanwhile, in homeschooling circles, there’s a lot of talk about moms.

Moms do the teaching, moms hold down the fort, and moms take care of all the little details that keep young families steady in the day-to-day activities. Moms deserve enormous credit, of course—all the credit in the world as a matter of fact—but today, we’re here to talk about dads.

We know that fathers are some of the most hardworking, high-achieving, devoted, and necessary people in the world. Dads may be operating behind the scenes most of the time when it comes to homeschooling, but as it turns out, they’re really indispensable. In fact, we really couldn’t live without them. Here’s why.

In 2013, Seton Home Study School ran a survey to discover what makes the difference between success and struggle for homeschooling families. Perhaps the single most common factor cited by successful families was support from Dad.

That can take many different forms depending on individual circumstances, but the key is that Dad cares and stays involved, that he supports the education of the children in the home, and believes in the work his wife undertakes to that end. (We know that some Dads stay at home and teach while Mom holds down a full-time outside-the-house job, but this is not common, so we will assume for this article that Dad works outside the home.)

It takes extra work and sacrifice on a father’s part for his wife to stay home and educate their children, but she can do that confidently and freely when she knows her husband has embraced that path alongside of her.

As for the children, they know instinctively when their parents disagree, and their behavior reflects the discord.

However, when a father commits himself and his family to a course of action, the children know there is no choice but to fall in line, and when they see Dad standing in support of Mom day after day, they won’t bother trying to do otherwise.

Fathers are the rock upon which the homeschool is built, and without whom there is no stability.

Part and parcel of this is the spiritual benefit that fathers bring to the homeschool. Just as Our Father in Heaven cares for each hair on our heads, so our fathers on earth possess an irreplaceable love and concern for their children. That concern manifests itself in the prayers and sacrifices which a father continually offers on behalf of his family.

A good father does all he can to ensure his children reach their eternal destiny as well as their earthly potential. Because he knows his children so well, and because he can call upon the special graces of the marriage sacrament, his prayers are uniquely efficacious for the welfare of his particular family.

My own father, after all these years, still amazes me with his profound commitment to my well-being and that of my brothers. Physically, he offers himself and his talents whenever we might need them—be it car repairs or financial advice, but spiritually, he goes to battle for us every day with Mass offerings and Rosaries, and though he wouldn’t tell us this himself, Mom lets us know when he’s fasting for us. I know that my father on earth will not rest until we are safe in the arms of our Heavenly Father.

Take up the Slack

At a more quantifiable level, it is also true that dads fill in where moms can’t manage. Though it sounds cliché, it is nevertheless often the case that fathers have a certain ability in the maths and sciences, and that the teaching of those disciplines falls to their lot, particularly at the higher levels. Without this contribution, children would otherwise lack the instruction they really need when working with such difficult concepts.

Even in cases where the roles may be reversed and Mom has the math mind, Dad often possesses a particular talent in an area that is less appealing or comfortable for Mom. It might simply be the difference between being adequate and being passionate.

In such cases, Dad’s contribution to the classroom is vital, both for the learning and for the interest of the students. The only things I remember about astronomy are the things I learned from my father, and I’ll never forget those nights when he pulled out the telescope and taught us the difference between planets and stars, how to trace a line to the North Star from the cup of the Big Dipper, the names of the constellations, and an appreciation for God’s gift of light.

In many families, the lion’s share of educating falls to the mothers, and in general, we’re not given to thinking of fathers as the primary educators of their children. That may be true, so far as it goes, but here’s the thing: dads are born leaders. Whether they know it or not, actively choose it or not, they lead their children. This is because children are fascinated by their fathers, in awe of the parent with the deeper voice who leaves so early in the morning and comes home so late in the evening.

Children instinctively look to their fathers. They want to know what ‘Dad’ will do in any given instance, and then they mimic what Dad does until it becomes their own. Have you never asked a child, “Why did you do that?” The answer is usually, “That’s what Daddy does.” This means that when Daddy prays, treats people with dignity, works hard, respects nature, honors life, takes care of Mom, loves books, and challenges his mind, his kids notice and learn to do the same.

It is precisely this fact of a child’s inherent attraction to ‘Dad’s’ ideas, choices, likes, dislikes, and actions that makes a father’s position and influence so important. Dads are the ones invested with the power to guide and inspire a new generation to change the world. How much more so when dads have chosen to live their vocations fully, parenting with devotion and intention, as homeschooling fathers are known to do! That’s why at Seton, we’re here to support and encourage dads. We take our hats off to you, Seton fathers, and we offer prayers for you.

May St. Joseph, Foster Father of Jesus, protect you and your families.