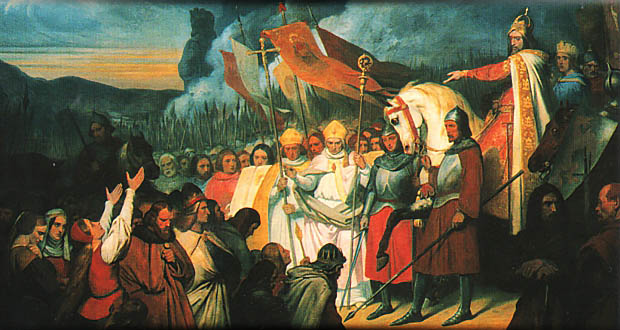 Dealing with the “I hate History!” Syndrome

Home schooling parents are often faced with the “I hate history” syndrome. But they can transform antipathy into enthusiasm.

Everything we teach our children should have as its ultimate purpose the glory of God and the good of souls, and history is no exception. How specifically can we teach history so that it fulfills these purposes?

First of all, it is through history that we learn that Jesus Christ is the most historically important person who has ever lived, that the Incarnation, Redemption, and Resurrection are the most important events in history.

Most students recognize that history is recorded past events which have made a significant impact on the world. One Person had the most impact of all. All of the ancient world points to Him because the only ideas and institutions that survive from that ancient world are either those which directly led up to the Incarnation and the founding of the Church (Jewish culture), or those which were preserved by the Catholic Church (everything we have from classical culture). If the See of Peter had not been located there, Rome would have become just another backwater village after the fall of the Empire.

All of history since the Incarnation has been dominated by the Church.

There are three principles to remember:

All history is taught from a point of view. Even the most meticulous card file historian has a principle of selection. We Catholics judge by these three principles.

If we teach history guided by these principles, certain lessons will emerge. The first lesson is that the Church really is built on a rock and the gates of hell really will not prevail against it. We know this is true through faith (Mt 16:18-19). But history confirms our faith.

The Church Under Attack

When we look at the broad span of history, we see the Church under attack from Roman persecutors, heretics, barbarians, Byzantine Emperors, power-hungry noblemen, Holy Roman Emperors, schismatics, Protestant revolutionaries, and modern materialists and atheists. Yet the Church still stands. Perhaps the strongest evidence history can give us that the Church will always stand is that it has survived attacks that would have destroyed any human institution.

We need not hesitate to teach older students about these problems that the Church has had. If we do, they won’t be surprised or shocked if they hear about them from some other source. But, more importantly, they are good evidence for the divine institution of the Church.

Many of the attacks on the Church can be answered by history. The Crusades… the Inquisition… the Protestant Revolt … Galileo… Franco… Pius XII…. Lies can be easily refuted with a little historical knowledge.

Christianity transformed civilization. … Pagan societies did not honor the human person…. Pagan society [regarded] women as property. … History properly taught will expose the lies of the radical feminists as little else can. Governments in pagan times had no limits on their power. Christianity introduced the concept of limited government, the idea that the king or ruler was responsible to God and that the legitimacy of governments depended upon whether or not they were in harmony with God’s laws. Absolutist, unlimited governments are pre-Christian or anti-Christian.

How do we go about teaching the historical lesson we want our children to learn? We tell stories. That’s the way history happened. History is not a list of events and dates. History is lived experience, people making choices, acting on them, and living through the consequences of those choices. The best way to teach history is to tell stories.

Dr. Anne Carroll is the author of two history textbooks used at Seton: Christ the King, Lord of History and Christ and the Americas.

Released for the first time online, this article originally appeared in the April 2001 Edition of the Seton Newsletter, Volume XVIII, 4