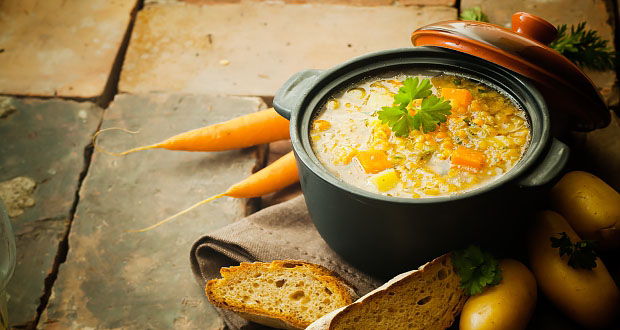 God is Moving Among the Pots and Pans!

Several weeks ago, I found myself becoming increasingly frustrated at the lack of time available to me to study God’s Word, read good Catholic books, and pray the way that I wanted to.

Before I had children, I used to spend many hours a day doing all of these activities. Once I had children and made the decision to homeschool, however, all of those spare hours sprouted wings, took off, and left me choking in the cloud of dust they left behind. I found myself lucky to have a half hour in the morning and another half hour at night in which to pray.

If only I could spend the Time…

I would like to say that I made this transition gracefully and in a manner which caused Heaven to beam with pride, but the reality is that I did not. To make matters worse, when I did have time to read, it was always about a Saint who was either a nun or a priest with much more time available than I in which to pray and indulge in the joy of spiritual reading. Many of these Saints even experienced the unspeakable joy of having either Christ or the Blessed Mother appear to them.

When I would read these accounts, I would say to God, “Lord, what about the rest of us? I’m not able to spend all of the hours before You in prayer the way they can. And yet, it seems like You only move mightily in the lives of those who have a religious vocation while the rest of us have to be content with snatches of prayer here and there as we go from household task to household task with no end in sight. I want to commune with You too! I want to experience intimacy with You too! If only I could spend the time with You in prayer that many of the Saints could, then maybe I’d have supernatural experiences too. I feel cheated because my vocation in life will not allow me to spend the amount of time in prayer with You that others can spend, and because of this, they get the supernatural experiences, and I don’t.”

Several days after I had cast these words God’s way, I came across a quote from St. Teresa of Avila that stopped me in my tracks. In speaking to the nuns at her convent, St. Teresa said to them:

“Don’t think that if you had a great deal of time you would spend more of it in prayer. Get rid of that idea! God gives more in a moment than in a long period of time, for His actions are not measured by time at all. Know that even when you are in the kitchen, Our Lord is moving among the pots and pans.”

Was it a coincidence that I stumbled upon this quote? Not hardly! I had prayed to God, and through this quote, He faithfully responded!

God’s Actions are not Measured by Time

Saint Teresa reminded her nuns that God’s actions are not measured by time. He doesn’t pour out His blessing upon our lives in accordance with the number of hours we can devote to Him in prayer. He doesn’t move more mightily in the life of a woman who can spend 3 hours a day at His feet than He does in a woman who can only devote 30 minutes because of her vocation as a wife and mother. How many of us have ever whispered a prayer to God while we were vacuuming or cleaning up spilled milk, only to have God answer that prayer in a wonderful way? Were we on our knees for hours before God when we whispered that prayer? And yet, He gave to us in that moment!

And let us not forget that there are many accounts of God moving wonderfully in the lives of men and women who weren’t even praying; they were simply going about their ordinary business when God did the miraculous in their lives. I think of Abraham, who was simply going about his business one day, when the Lord appeared to him and said, “I am God Almighty; walk before Me and be blameless.”

Was Moses prostrate before the Lord for three days and three nights when God appeared to him in the burning bush? No; he was doing what he always did when his life was changed forever. He was tending his father-in-law’s sheep when God encountered him.

Joshua was simply walking toward the city of Jericho, when he looked up and found himself face to face with the Commander of the Lord’s Army.

I think of Gideon, who was threshing wheat in a winepress when the angel of the Lord appeared to him in a wonderful way. My thoughts wander to the wife of Manoah, who was chosen by God to bear Samson. There she was, working in the fields, when an angel from Heaven appeared to her with the news that she would bear a son.

Saul and his servant were out looking for lost donkeys when the prophet Samuel approached him, anointed him, and said, “Has not the Lord anointed you leader over his inheritance?”

And let us not forget the shepherds who were living out in the fields on the night that Our Beloved was born. There they were, keeping watch over their flocks, when suddenly, an angel from Heaven appeared to them with the news that Christ had come, and they heard the entire heavenly host praising God!

Peter, James, and John woke up and expected that day to be just like every other day. Washing their nets by the water, as they always did, they looked up and saw One standing before them who would change their lives forever with the words: “Follow Me, and I will make you fishers of men.”

I think of the three shepherd children from Fatima, who were playing as the sheep grazed in the fields, when our beloved Blessed Mother appeared to them.

The list goes on and on, but we I think we all get the point.

Five Hours a Day in Prayer?

All of these people were simply doing what their vocation demanded of them at that time when God moved mightily in their midst. They are living proof that it is not necessary for one to spend five hours a day in prayer in order to be used by God or to hear from Him. They are living proof that God “moves among the pots and pans” because all of them were simply carrying out their everyday duties when God did the miraculous in their lives.

When I pondered all of these things, my frustration dissipated. I no longer felt shackled by my bad attitude, and what an attitude it was!

If God gives more in a moment than He does in a long period of time, then I will offer up to Him my every moment no matter what it finds me doing. I will meditate on Him while I dust the tabletop. I will whisper into His ear while I fold the clothes. I will fall in love with Him again and again as I scour bathtubs, prepare math lessons, and cook the family dinner for the thousandth time. I will do everything in my house as if I was doing it for Him, and He will come to me, fill me with His Presence…

… and love me as no lover can among the pots and pans.