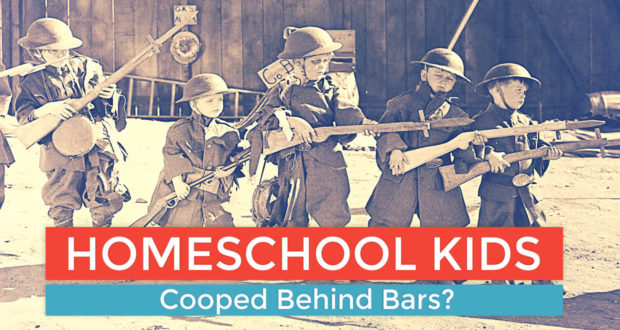 Dominic de Souza shares how life as a homeschooling kid can be more fun than going to school with vivid imaginations at work!

Growing up as a kid homeschooler sometimes feels like living on the fringe of the Roman empire, or a gulag. You can see the pinnacles of the great, public school in the distance, but you’re too poor to go there. So you make do with what you have.

There was one game we made up that became a favorite with our family; Counter Attack. A game of terrorists and counter terrorists, we made use of rulers and tennis rackets for P90s and MP5s. The rules were hard; only six bullets each, and we had to work together to take the other team down.

Competition was not only fierce, but the more realistic we acted, the more addicting the game became.

We often played it with our HomeSchool CoOp, where four times a week several families would come together in a local rectory to share talents and resources. The priest was very supportive of us. The rectory stood adjacent to the parish Church and bordered the playground of the parish school, with a 4 foot high fence of iron bars between them.

During our lunch breaks, we would often look wistfully at the school children with their packed premium lunches (while we only had PB&Js), their colorful lunchboxes with stickers (ziplock bags for us), and the extensive playground and swing set (we had the car park).

Necessity being the mother of invention, we invented a game to fill the time, and every break we would explode out from the classrooms, divide in two teams, count down from ten and start at opposite ends of the rectory, creeping around the building, ducking from car to tree, careful not to expose limbs, and working in tandem to round corners.

Oh, and we shot each other by saying ‘BANG’ as loud as possible and then shouting the victim’s name. ‘Dead’ operatives had to put their hands on their head and stay put.

It was during one of these special ops when my team and I were covering the cars, waiting for the terrorists to stick their heads into our line of fire. The sun was hot and dry, and they were taking forever. And that was when I heard the sneeze behind me.

I turned around to the iron fence separating the parking lot from the school yard.

It was crammed with silent school children, their faces pressed against the bars, their hands by their cheeks, watching our mission with the intensity of a thriller. One of them waved.

I stared at them. “What are you doing?” I thought. “You’re the ones with the lunchboxes and the stickers and the playground! Why aren’t you having fun?”

And then it struck me. “We’re having more fun than they are.”

That blew my mind.

And then I had an idea; I crawled over to them (evading possible sniper fire) and invited them all to join my team. Their eyes were feverishly bright. They cocked their thumbs and extended their forefingers in the universal gesture of a gun. I looked down the line of new freedom fighters and grinned.

Leaving the parking lot in the hands of my new-found friends, I pulled my team from their positions and initiated an aggressive rout, forcing the terrorists around the building, into the open parking lot and under the withering chatter of a million machine guns.

Needless to say, the terrorists were shocked speechless. And within a minute, had started a new game, and converted all the school children into their team.

In later years, I would keep looking back at that moment, so full of irony. We had grown up thinking and feeling that we were behind bars, unable to do any of the cool things that school kids did. They had Playstations and playschool and a playground. Whereas we had rulers and tennis rackets.

To see all of them lined up against the bars as if they were in jail, every one of them yearning to break through and join us, was a revelation. And ultimately, it was a confirmation of something I have grown to believe; home school children have greater creativity, or at least greater opportunities for creativity.

Psychology Today carried an article titled ‘As Children’s Freedom has Declined, So Has their Creativity.’ It said “In a recent IBM poll, 1,500 CEOs acknowledged this when they identified creativity as the best predictor of future success”. Kyung Hee Kim, a professor of Education at the College of William and Mary, put out a report documenting a continuous decline in creativity among American schoolchildren over the last two or three decades.

He analyzed scores on a battery of measures of creativity collected from normative samples of schoolchildren in kindergarten through twelfth grade over several decades. Across the board, the scores have declined drastically since 1984;

Coming to think of it, our homeschool, ‘stone-age’ upbringing may have been the best thing that ever happened to us.

We all became voracious readers, artists, musicians, martial artists, chefs, and the list goes on. Instead of just watching movies, we made them.

Having less things, and having more freedom allowed us to push aside our school books on the same table and pull over the artpad and start designing the next boardgame.

Perhaps it wasn’t us behind bars?