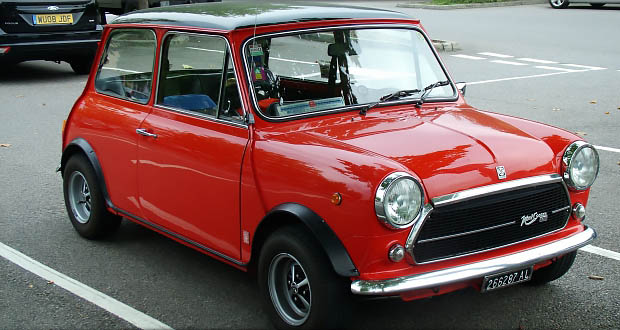 I have eight kids and, therefore, I am compelled to drive an exceedingly large van. A van which is, even more humbling still, an eye-catching, look-at-me-I’m-hideous! red. It is a monstrosity.

Any illusions I may have had about being a hip, young mom, were dashed the day my hubby came home with our fifteen passenger van.

As he pulled it into our driveway that afternoon, I felt certain that this thing symbolized the untimely death of cool me, soon to be replaced by haggard, tragic, unfashionable me. A mere shadow, really, of the woman I once was. I couldn’t help looking at my ever-expanding belly and resenting the new arrival; the child who had made me go there, made me cross that line I wasn’t prepared to cross.

I was now the owner of a mammoth vehicle. How would anybody ever know that I was really a mini-cooper mom at heart when I came lumbering down the road in something slightly smaller than a bus? I wept tears of woe and misery. I took to my bed with french fries and chocolate.

Eventually, though, I learned to drive the thing. Reluctantly. Begrudgingly. It was huge and frightening. Huge and frightening, I said! When shopping, I left it in abandoned parking lots fearing that, were I to venture alongside other cars, I’d certainly hit something. For a year, I walked a mile to the entrance of any store. When driving down any street smaller than the interstate, I was sure that my van was just too wide and I cringingly waited to hear the screech of metal against metal.

But, much to my surprise, as the months passed and my temperature slowly cooled to normal, I actually became a very adept driver of said van. While confidently navigating the streets, I looked on all those other little vehicles way down there and, occasionally, I even smiled. I started feeling kind of powerful, kind of awesome. I sometimes actually forgot to be embarrassed by how ridiculous it must all look from the outside; me driving along in my scarlet nightmare with my passel of hooligans in tow.

As time progressed, I also found that I had to admit there were actually some benefits to having a monster van. Yes, seriously, benefits!

The first and most delightful discovery was when my husband and I decided to remove the first bench. Now the kids would have to buckle into benches that were refreshingly far away. There is a good four feet between the driver’s seat and the knees of the closest kids. And since our van drives something like a noisy truck and since the radio actually works, I can sometimes mosey along with a bus load of children and hear only the distant rumblings of chaos emanating from somewhere far behind.

When Anna shouts up to me from the very back seat, “Mom! Joseph kicked me in the face!” instead of going instantly bonkers, I have enough distance that I can stay detatchedly calm. After all, even though they are all riding along with me, they are in an entirely different time zone. So, instead of erupting in a torrent of apocalyptic threats, I find that I have enough space coolly to ponder the situation and I come to wonder how such a feat was even possible. I take a peek in the rear view mirror.

“They are all tightly buckled,” I think to myself as I drive placidly along, my hand cradling the bottom of the steering wheel. I try to picture how thirteen year old Joseph could have possibly kicked eight year old Anna in the face since both of them are strapped down and they are sitting three benches apart. I decide that it is more or less impossible. I reason further that, as there is no blood and she is not crying, this crime of Joseph’s is probably grossly overblown. I turn the radio up and keep driving.

So, as I see it, a large van enables a parent to have a moment to think clearly. Rather than employing the knee-jerk reaction often utilized in smaller vehicles, where my inclination would have probably been an instantaneous “Joseph! How dare you! No dessert for the rest of your life!” there comes instead, a simple pronouncement from me, “Behave yourselves back there!” which usually suffices. For a while anyway.

Give Way: Mother on Board

Another good thing about owning a large van is that, because I am driving a hideous beast, everybody worriedly gives me the right of way. And, since I am a woman, it is presumed by many that I can’t drive the thing properly anyway, so there is a good deal of nearly-comical yielding that is always going on around me. I have fun watching this.

There is a final advantage to owning a large van. Which is, that you can haul nearly anything of nearly any size. And since my van is the opposite of glamorous, usually being occupied by the most organic of all creatures, namely children, there are no worries that it will return to me any worse off than it was before. In it, we have loaded: cords of wood, dining room tables and chairs, king size mattresses, entire scout troops with their camping equipment, multiple Christmas trees, couches, bags of trash, countless two by fours and endless sheets of drywall. Plus, of course, our van has carried a million dollars worth of groceries and a million boxes of diapers.

For all of this, I am slowly softening to gratefulness as I begin to recognize that our poor van has been a very reliable and obedient family carriage. I am feeling slight pangs of guilt about having spent years now actively hating the thing. It has been a witness to many a peanut butter picnic and many a slathered sunblocking on our way to the zoo.

It has heard countless games of “yellow car” and “I spy.” It has carried us away, eager and excited, to beach vacations and brought us, somewhat more freckled, reluctantly home. It has been there, with it’s engine rumbling away, through many a mobile homeschooling lesson, for the reciting of spelling words, the memorizing of multiplication tables, and the careful recountings of Baltimore Catechism lessons. It has heard numerous rosaries and prayers to Saint Christopher.

It has brought us to church and to doctor visits, brought us to friends and to family, brought us to work and to play. It has been spilled on and sneezed on. It has been laughed in and cried in. It has witnessed threats of death and proclamations of love. When I think about it, I really am thankful to that ugly, old thing for all its hard work and endurance.

But when the kids leave home, I’m going to buy a sports car.

by Alanna Smithee, a pseudonym for a homeschooling mother