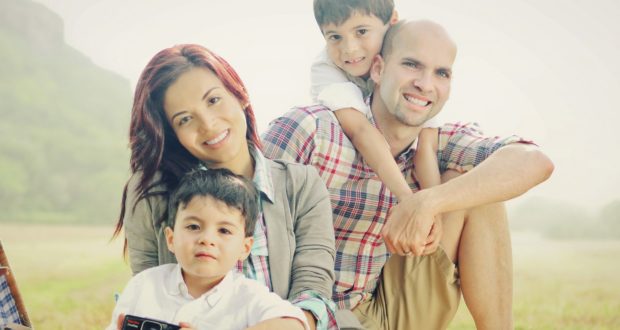 Homeschooling from Our Domestic Shrine in Puerto Rico

by Luiggi and Jennifer Pérez

Being a homeschooling family is not coincidence. We believe that through the intercession of the Blessed Mother, God in His merciful plan for our family has given us the mission to educate our children and ourselves.

This story goes back to 2009, just before our older son Tiago was about to start Pre-kindergarten (K4). Our younger son, Jairo, had been diagnosed with a speech deficiency, and the doctors recommended that Jairo should interact with kids his own age in order to improve his condition. For this reason, we started to look for a school.

Our baby boy was just 2 years old and it was very difficult to find a place where not only both Jairo and Tiago could fit in but where they could receive a Catholic education. After we researched many schools, we decided to enroll the boys in a Catholic school that offered both day care and Pre-kindergarten. 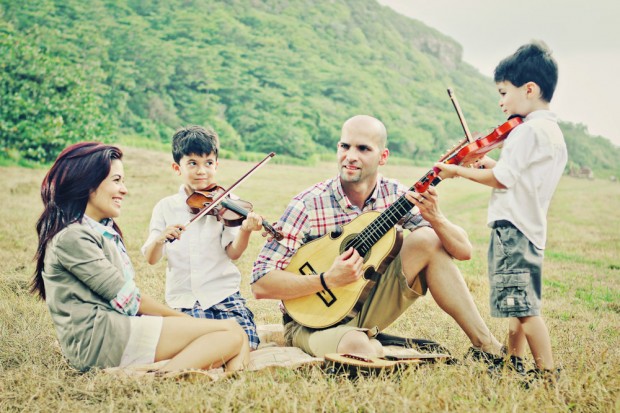 A few weeks after the kids started their school year, we felt that something was wrong. We could not identify exactly what it was, but there was something that bothered us as a Catholic family. At first we thought it was just the normal feeling of parents who must take both of their children to school; but as the weeks and months passed, we increasingly felt there was something more significant. It was then that we started to pray intensively to Mary under her title Mother Thrice Admirable to help us find the path that God had planned for our family.

We must confess that we had an internal battle because on the one hand, we thought that traditional school was needed in order to help our younger son Jairo overcome his speech problem, but on the other hand, we believed a change was necessary. Without ever being able to identify a solid reason why, the whole question of the boys’ school continued to be a source of anxiety and unrest for us.

In May 2011, after the boys finished their school year and Tiago graduated from first grade, we decided to go to the Schoenstatt shrine in Cabo Rojo, Puerto Rico. We came to the shrine to thank our Blessed Mother for the graces she had given us during the school year. It was then, at that particular moment of grace, that our Mother Thrice Admirable awakened in us the desire to homeschool our children.

Homeschooling was not entirely new to us, since some of our friends that we knew through the Schoenstatt movement were homeschooling. We had admired the profound love and respect each member of those families always professed toward one another, and it was the first thing that we liked about homeschooling. 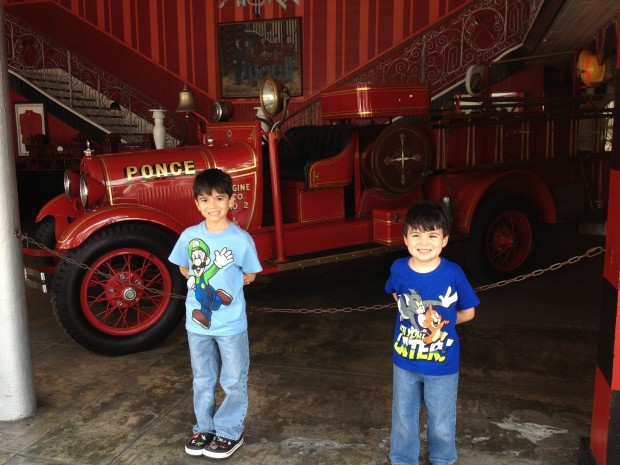 Tiago, our older son, loves to draw and to play outside in the park. He especially enjoys soccer with his dad. Tiago is very creative, and he enjoys designing his own spaceships with Lego blocks. He likes reading—favorite topics include animals, superheroes and especially earth science, since Tiago is also fond of exploring nature. Tiago is fond of music and enjoys trying to invent new melodies with his violin.

Jairo loves to read. His favorite classes are Phonics and Math. He enjoys playing with planes and spaceships, and his favorite sport seems to be biking. Like his older brother, Jairo is also a music enthusiast. He loves to listen to music and to sing. He also enjoys cooking, but most of all, he always has a good joke and loves to find ways to make us laugh.

After doing research and praying constantly, we decided to start with Seton Home Study School. It is worth mentioning here that at the time we made this decision, our children were already enrolled for 2nd grade and Kindergarten in the Catholic school they had attended for the past 3 years. In fact, all the books and uniforms were ready at home, waiting for the school year to start.

That didn’t matter, however, and we didn’t consider it an obstacle; we had prayed for many years and God had clearly answered our prayers. It was now our responsibility to obey His will and to follow that path that He was leading us to take. It was a leap of faith, no doubt about it, but we took it.

As we began with the homeschooling, we noticed that the first individuals in need of education were ourselves, not only with regard to academics and the business of education, but more profoundly, we needed to be educated as a Catholic couple. How could we teach our children if we hadn’t first learned ourselves? It seemed divine coincidence that this very question became the main topic of one of the bi-weekly meetings in our local Schoenstatt couples’ group. God was giving us a pretty strong hint of what He really wanted from us.

Our ultimate goal has become to have what Schoenstatt calls a Home Shrine. To do this, we have invited our Blessed Mother to become part of our little family and to live among us as her own. Through the pedagogy of the domestic church as espoused by the Schoenstatt movement and our adoption of homeschooling, our family has been given a new and full Catholic identity. 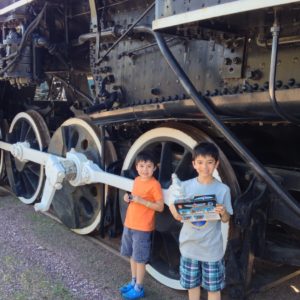 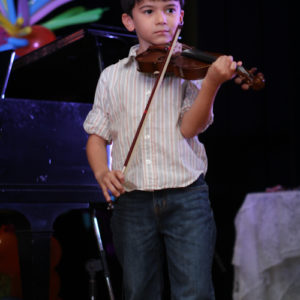 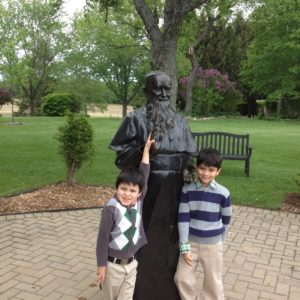 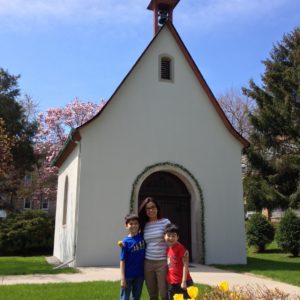 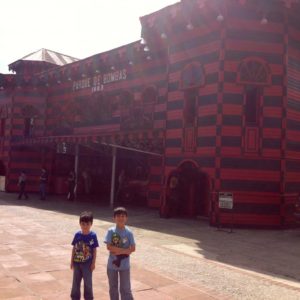 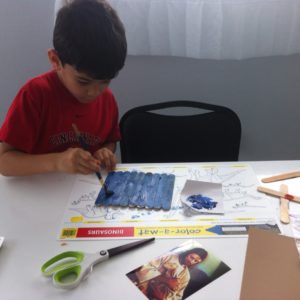 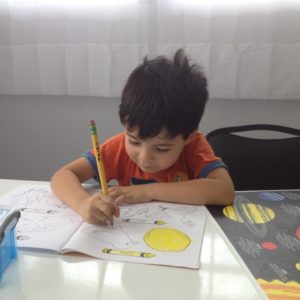 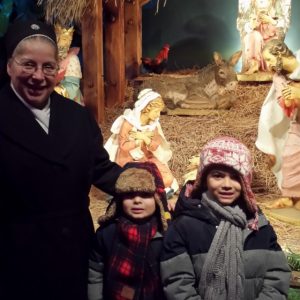 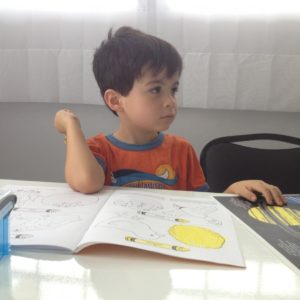 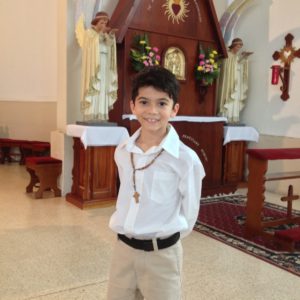 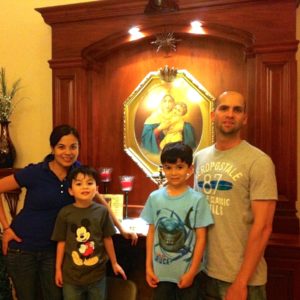 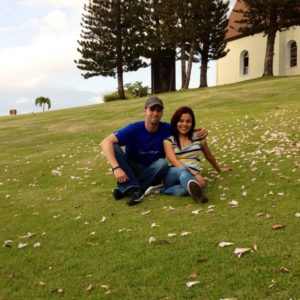 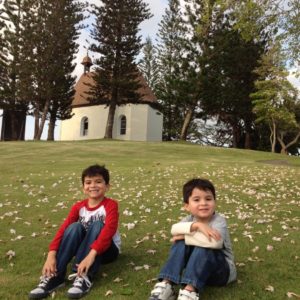 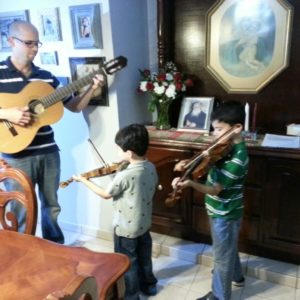 Academically our children are doing wonderfully. They have learned so much. Our younger son Jairo has improved immensely academically and has overcome his speech deficiency. We are very proud of their accomplishments but the core of our happiness resides in the fact that we are living a true Catholic life at home. We could never describe how blessed we are to homeschool our children and to have our blessed mother as our educator. We are convinced that homeschooling is the best thing that has happened to us, and are extremely grateful to God for his blessings on every member of our family.

Every day, we pray for all Catholic homeschooling families, especially for Seton’s families. May God in his mercy help us all to persevere in our mission to educate our children. Please keep us in your daily prayers and be sure that we are always praying for you!

Our Typical Homeschooling Day with Seton

Our day starts at 6:00 am with breakfast. When we finish, we do our morning prayer. Immediately after that, Dad goes out to work and our school day has officially begun. We typically start with Reading, followed by Religion and English. Around 10:00 AM, we take a recess for snacks and play outside, usually using this period to include physical education. After recess is over, Mom prepares lunch and then continues with the remaining classes for the day.

We have decided to incorporate Spanish and Music as additional classes to the curriculum. Spanish is taught on Fridays and Music (violin) is daily practice. We have found it useful to schedule these as part of the regular homeschool day schedule. It helps us to keep track and be accountable for those extracurricular activities.

What is the Schoenstatt Movement?

In its German roots, “Schoene Statt” means “beautiful place.” The original Schoenstatt shrine lies near Koblenz in the heart of the Rhineland. First inhabited by Augustinian nuns, it was named by the Archbishop of Treveris, who had given the nuns the land. At the beginning of the 20th century, the property was acquired by the Pallottine fathers. In 1912, a small house of studies was begun at Schoenstatt with Fr. Joseph Kentenich as its spiritual director.

With the dawn of the First World War, Fr. Kentenich saw the need for union with God through Our Lady as a means of safeguarding the faith in dire times. In October of 1914, Fr. Kentenich and his students entered into a “Covenant of Love” with the Blessed Mother under the title Mother Thrice Admirable.

This original Schoenstatt soon became a place of pilgrimage, and in 1947, Pope Pius XII granted an indulgence to all visiting the shrine. Since that time the Schoenstatt movement has spread around the world.
Schoenstatt spirituality is characterized by a childlike dependence on the Blessed Mother, who is our intercessor with the Holy Trinity, and the dispenser of God’s graces; practical trust in Divine Providence and God’s Will;  sanctification of the workday; and a firm sense of rootedness in one’s spiritual home, which gives us the confidence to go out and meet both life and death with joy, hope, and love.