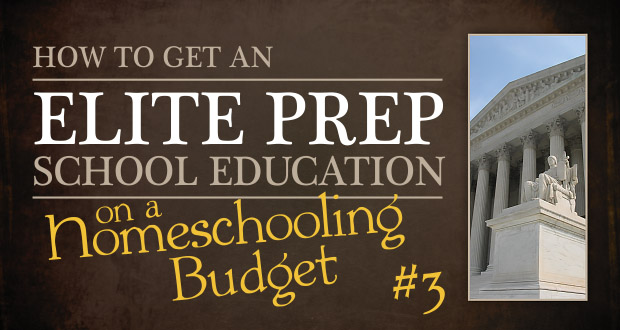 This is the 3rd article in the series How to Get an Elite Prep School Education on a Homeschool Budget.

Award-winning teacher John Taylor Gatto has identified fourteen themes that are common to elite private boarding schools—prep schools where children from wealthy and influential families are groomed to assume powerful positions in society.

If we practicing Catholics hope to have a say about the direction the American culture, economy, and government will proceed, we would do well to prepare our children to bring their carefully nurtured Catholic values to leadership positions.

Thankfully, homeschooling offers us an opportunity to accomplish this goal by providing a prep school education at a tiny fraction of the price.

Gatto’s Third Theme is that students must gain insight into major institutional forms including courts, military, and corporations, as well as the ideas that drive them.

By truly understanding these institutions, students mature into responsible citizens who will not be persuaded by opinion-makers in the major media, but will be capable of forming intelligent, independent judgments, and then acting on them.

Clearly to accomplish this, we must emphasize history—especially American—civics and geography in our homeschools, but here are a few other ideas.

Bring your children to your state capital to watch a legislative session, especially one that involves an important issue such as our ability to homeschool free from government intervention.

On a local level, you might bring your children to town hall meetings, or meetings of the library board.

In addition to informing them about community issues, they will learn about rules of order and how responsible citizenship works.

If you have a military base nearby, call and find out if they have any events (parades, and training graduations, for example) open to the public.

Ask veterans you know to talk to your children about their experiences. Introduce your children to the fine traditions of honor and service found in the United State military services.

Gatto does not include this final institution, but I believe we should give our homeschooled children a real knowledge of the inner workings of the Catholic Church. Seton religion classes teach the doctrine, but pay careful attention to the 8th grade religion book Witness to the Faith.

This book gives the history of the Church, its triumph over persecution, the stories of great saints, and how the Church evolved into its present institutional form.

News reports offer another opportunity to show how the Church changes over time as exemplified by the ordinariates allowing Anglicans in the United Kingdom, North America and Australia to enter into full communion with Rome while retaining some of their own traditions.

If recent history is any indicator, some of your homeschooled children will enter the priesthood and religious life, and have a bit of influence over the institutional Church’s future course. Get them ready.

Public school teachers and college professors report that many teens and young adults are pretty clueless regarding basic institutions of American society.

A practical example of this is credit card companies that prey on college students, encouraging them to “establish credit” and then chase their parents when the kids accumulate charges they cannot possibly hope to pay.

Your children will benefit from insight into our government, military, financial and religious institutions, as they become adult citizens.

Society will benefit from the contributions of well-formed Americans who possess thoughtful understanding of the foundations that guide it.
[ginny-bethisway-book]