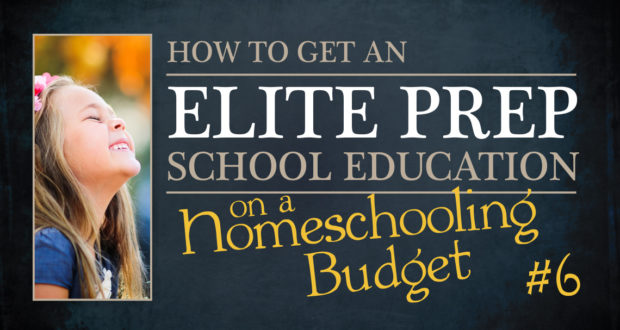 Mental Independence: Why Students Must Start Thinking for Themselves

This is the sixth article in the series How to Get an Elite Prep School Education on a Homeschool Budget.

Award-winning teacher John Taylor Gatto has identified fourteen themes of elite private schools where wealthy influential families groom their children to assume positions of authority. Gatto understands that government schools are too often producing students who will lack the capacity to lead, leaving members of a small privileged group to make policy for the rest of us.

We homeschoolers do not have to accept this fate for our children, and by studying Gatto’s themes, we can provide students with a top-flight prep school education at a tiny fraction of the cost.

Gatto’s sixth theme is that entitled students are given ample opportunity to work independently.

Gatto asserts, and my own experience confirms, that government schools charge teachers with filling about 80 to 90% of students’ time in class and often send home hours of directed homework. Students are not left alone to work out their classroom assignments, but increasingly are instructed to collaborate with other students, a process sometimes referred to a peer directed learning.

Common Core teachers report that students must justify answers according to set formulas, and are constantly groomed to spit out set answers for standardized tests. Rarely are children allowed to explore solutions, perhaps fail, learn from failure, and gain personal mastery.

1. In the not too distant past, children needed to think for themselves.

In former times, many working class kids learned to think and work independently when their labor was required on the family farm or in the family business. In Farmer Boy, author Laura Ingalls Wilder recounts how young Almanzo Wilder received an ox yoke for his ninth birthday so he could begin training calves by himself.

After hitching the calves to the yoke, his father left him alone to figure out how to train the calves to respond to simple commands. On his own, young Almanzo used food as a reward, and had the calves obeying his commands in one session.

When I was a child, organized sports were not nearly as common as today. Groups of neighborhood kids would play pick-up sports, forming teams, picking captains and negotiating rules with virtually no adult input. Commonly, at what would now seem remarkably young ages, children were sent on errands to various businesses, often walking or taking public transportation by themselves.

School-age children would leave home in the morning and often not see their parents again until “the streetlights came on.” They were expected to behave responsibly without constant adult supervision.

2. No More Independence. My, how times have changed!

Now parents arrange play dates, and children are supervised constantly (and understandably, considering some of the ominous changes in American society). Sports are adult directed and children have no idea how to play without supervision. Even homeschooling moms complain that children goof off as soon as mom’s back is turned. This problem must be addressed early and consistently.

Much like our pioneer ancestors, the best way is to give our children real work—apart from their studies—show them how to do it, and then leave them to work on it alone. Offer correction only when strictly necessary and praise them for a job well done. Follow a similar method for schoolwork.

If a child dawdles at math, for example, give him a reasonable amount of time to finish it, perhaps forty-five minutes. After that the book is closed, and the remainder of the lesson has to be finished during TV, playtime, or even over the weekend. Don’t argue and don’t hover.

3. Children must learn to think and work by themselves.

All of these benefits are becoming increasingly important in the United States at this time in history. Not that long ago, and still today in other cultures, extended families and close-knit communities gave needed aid to the disabled or persons experiencing a crisis. That society is quickly disintegrating, leaving many Americans dependent on government.

You give your children a tremendous advantage by encouraging traits of independent thought, confidence, and self-reliance. There’s a saying I picked up from my blue-collar ancestors, “If you want a helping hand, you’ll find one on the end of your arm.”

Make sure your children know where to find their helping hands.