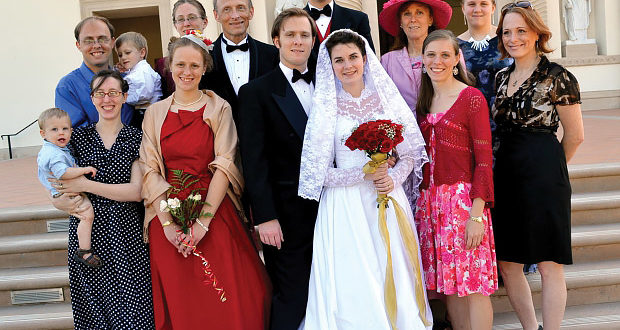 Why equate homeschooling to a saga? One definition of saga (from dictionary.com) is “a … Norse prose of achievements and events in the history of a personage, family, etc.”  Given our family’s Norwegian background and a time period of over 50 years, it seems to fit!  Of course, you are only seeing the “Readers’ Digest Condensed” version.  This saga is being told from the perspective of the father of this family, so it is only fitting to begin with his story:

All 19 years of my classroom education took place in public institutions.  My father (a son of a Lutheran missionary and minister) was a public school teacher.  I even had him as my Algebra, Trigonometry and Geometry teacher in High School (not quite homeschooling, but I really enjoyed him as a teacher).  In my Junior and Senior years, he was the principal (needless to say, I had perfect attendance).  My mother also did some work in the public school, helping with special needs children.

I met the Love of my Life (Rose) when I was in college.  She had a much different background.  Rose was a cradle Catholic in a very religious family and attended Catholic schools during most of her school days.  She would eventually graduate as a nurse from The Catholic University of America.  As we approached our engagement, there were lengthy discussions about how our children would be raised.  It became clear to me that Rose could never leave her beloved Catholic faith. I also came to greatly admire the Catholic Church’s stance on issues such as abortion and birth control.  Thus, one week before we were married, I was confirmed in the Catholic Church.

A few years later, we had two children and the oldest was approaching first grade.  Given Rose’s upbringing, we decided to enroll our eldest in the local Catholic school. What we found surprised us- things had changed over twenty years, and not for the better.  Bad language and loss-of-innocence concepts came home courtesy of the other students.  But even more surprising was the morals of the teachers-they openly lived with their “partners”, were militant about birth control (“two are enough”) and knew less about their faith than I (as a convert) did.  They were not the nuns of old; in fact, there were no nuns.

A five month job took us to another city and allowed us to change schools.  In that case, there were a number of teaching nuns who faithfully followed the teachings of the Catholic Church.  But, incidents like neighborhood kids shooting BB’s at the students led us to ask the question: “Is this the best way to educate our children?”

Shortly after that, I suggested that we homeschool our children. That kind of suggestion from a man was rare.  Rose thought that I was “losing it” (AKA crazy) and told me such in no uncertain words (my parents agreed with her)!  Some studies suggest that there were only about 15,000 homeschooled students in the United States in 1984.  A few years later, the numbers were greater, but they still weren’t very large. However, I had done some research.  The Homeschool Legal Defense Association had started in 1983.  For a small membership fee, they would help to keep you out of harm’s way and would provide legal help if situations escalated to that level (and they are still doing a great job).  I’d also heard about Seton Home Study School.

A business trip to the Washington DC area allowed us to take a few hours to travel out to Front Royal, cut down an alley, go up a flight of stairs and see the two rooms that Seton occupied.  We met with Dr. Mary Kay Clark and reviewed the course materials.  Seeing what Dr. Clark was accomplishing (and homeschooling her boys at the same time) helped to give us some confidence that we could do the same.  We signed up shortly thereafter (our Seton Family number is less than 50). 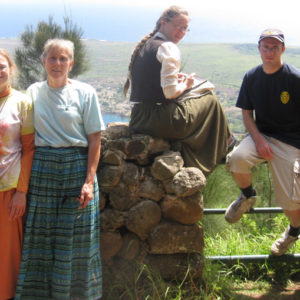 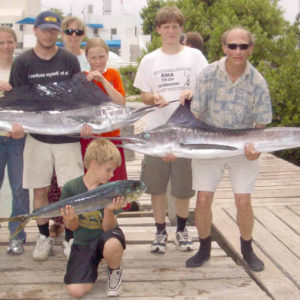 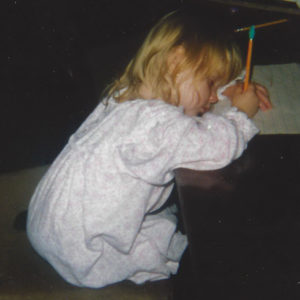 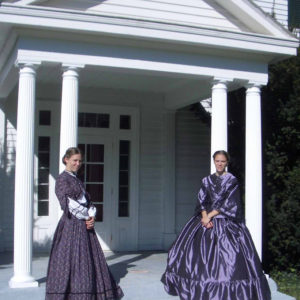 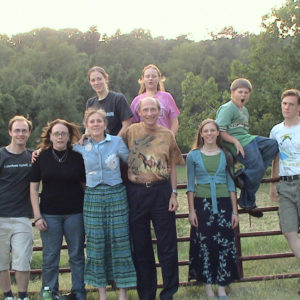 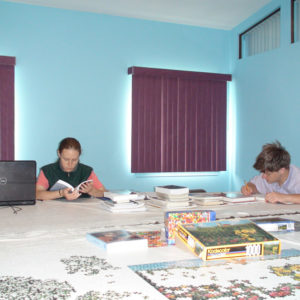 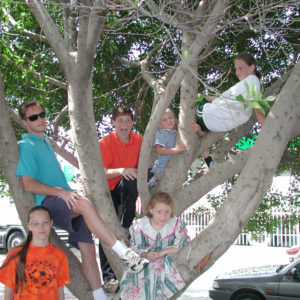 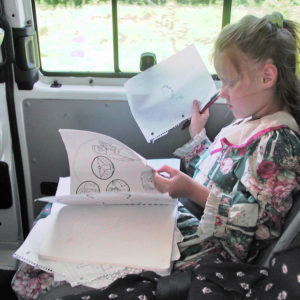 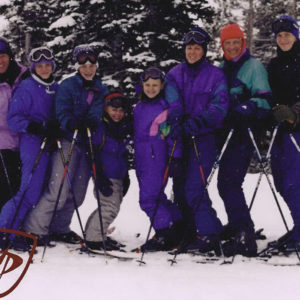 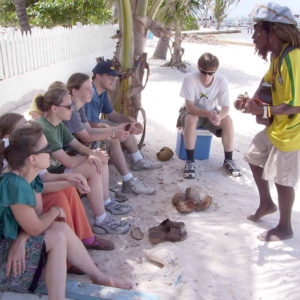 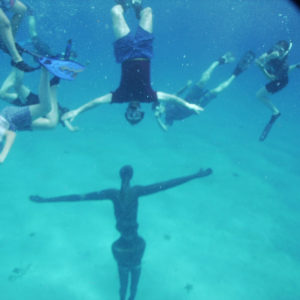 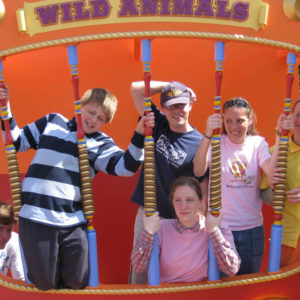 First, and foremost, I must give credit to my wife Rose.  In regards to homeschooling, she has been both the Angel and the Taskmaster.  As I was writing this article, I went back through our boxes of photographs and digital photographs.  I was struck by all of the “good times” (e.g., climbing trees, playing games, doing projects) where the children were obviously having a great time.

From the beginning, Rose followed the Lesson Plans very religiously.  The day almost always started with daily Mass (a side benefit was that the boys were often able to be altar servers).  Schoolwork and daily chores usually had to be completed before the children got “free time”.  On the other hand, the flexibility of homeschooling allowed Rose to adjust for field trips, weather forecasts, my work schedule and other family priorities.

An important family tradition that developed was reading / discussing at least one chapter from the Bible at the end of our supper meal.  We alternate regularly between the Old Testament, the Gospels and the Epistles.  Much of that reading is sequential, so we complete the entire Bible every three or four years.  Almost nothing teaches the kids phonics better than having them read a chapter of Old Testament places and names!  Sundays are “Religion Day” and that is where we focus on the Seton religion assignments.

In the beginning, the most asked question we received was “What about socialization?” We already knew the negatives of peer socialization, but we didn’t really have the full answer.  Looking back over 25 years of homeschooling (and counting), we now realize that the vertical integration of the homeschool environment was one of its most important benefits.  We were eventually blessed with seven children.   They were all interfacing with adults and children in other age groups much more than children in a traditional school environment.

That resulted in better socialization skills than we had ever imagined.  Confirmation of that has come from the many adults who were surprised at how easily and fluently our children could talk and work with them.

We have always believed that education does not just come from books.  The flexibility of homeschooling allowed us to explore a large variety of extracurricular activities.  Music lessons (voice, violin, piano, trumpet) could be scheduled with ease during the day.  The children participated in church choirs, plays, block rosaries and recitals. Vacations could be scheduled during off-peak periods when there were no crowds and the costs were lower.  We would do “unit studies” on places that we were planning to visit.  Over one year and a half period we studied and visited most of the Civil War battle fields in the eastern United States.

Many of the trips that we made had a religious focus /connection (e.g., Rome, Lourdes, Fatima, Turin, Assisi, Emmitsburg for the National Shrine of St. Elizabeth Ann Seton).  Overall, our children have been in all 50 states and in over 25 countries.  Finding Mass while traveling was both a requirement and an experience.  Even though the children may not have always understood the words, one benefit of their Seton education was that they knew what was being said.

Physical Education was composed of activities such as dancing (Irish Step, Square, Swing, Contra), family bike rides, skiing, hiking, swimming, horseback riding and “working in the garden”.  Team sports were more difficult in the beginning, but the advent of organizations such as the Homeschooling Sports Network and other local homeschooling organizations eventually allowed participation in team sports such as basketball and soccer.   Our family businesses also provided our children a chance to learn computer, accounting, scheduling, farm, construction and other life skills.

Today, as I look back, it is hard to imagine what life would have been like without homeschooling.  After the 8th grade, our children were largely capable of doing independent study (guided by the Seton curriculum), so Rose would pass them off to me.  I have had the job of motivating them to complete their high school studies, helping when needed and reviewing their assignments and tests.  I have to admit that I am not nearly as good at it as my wife Rose!  On the other hand, what post-Seton metrics / achievements do we have?

All five of our Seton Home Study School graduates have jobs.  Several of them were National Merit Scholars with multiple offers of full scholarships.  There have been perfect / high scores on SAT sections (credit being given by our kids to Seton Latin, English and Math studies). One of our children graduated with straight A’s from Thomas Aquinas College.  All of them believe that the Seton curriculum provided them with the tools they need  to succeed on the world stage.

We have a few more years before our youngest will graduate from Seton Home Study School.  We have several young grandchildren, with more on the way.  Their parents also plan to continue with the homeschooling (may I say it?) tradition.  After our long, cold winter, my grandson Patrick looked out into our garden and asked “Grandpa, how come nothing is growing?”  I took him by the hand and led him out to see the newly sprouted peas and potatoes that were just pushing up through the dirt.  Like the plants in spring, we have a new generation and our family’s homeschooling saga is not completely written.