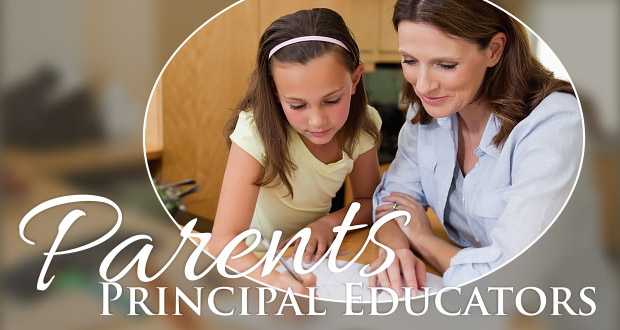 The Rights of Parents as Principal Educators

The primary role of parents in their children’s education, especially in their religious education, comes from the importance of children in Christian marriage.

The Catechism of the Catholic Church says of children in Christian marriage, quoting the Second Vatican Council:

“By its very nature, the institution of marriage and married love is ordered to the procreation and education of the offspring, and it is in them that it finds its crowning glory.”  “Children are the supreme gift of marriage, and contribute greatly to the good of the parents themselves” (CCC 1652, quoting Gaudium et Spes, 48, par. 1, and 50, par. 1).

The Catechism continues with what follows from children being the crowning glory of marriage:

“The fruitfulness of conjugal love extends to the fruits of the moral, spiritual, and supernatural life that parents hand on to their children by education. Parents are the principal and first educators of their children” (CCC 1653).

This article was taken from pages 8 to 11 of the 54-page pamphlet Responsibilities and Rights of Parents in Religious Education, written by a Canon Lawyer for the Catholic Homeschool Network of America, now available from Seton Educational Media for $2.00.