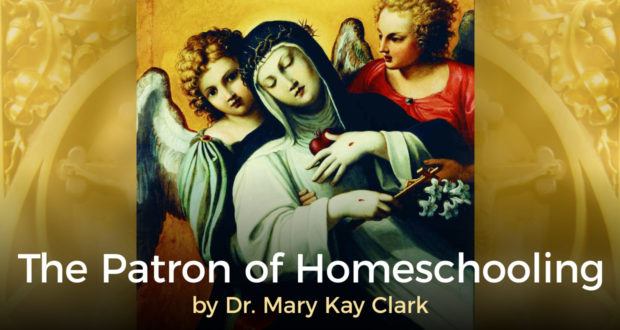 The Patron of Homeschooling

Easter is a celebration of the Resurrection of Jesus Christ. The four Gospel writers give the details of the finding of the empty tomb, the cloths lying inside the tomb, the appearances of Jesus to Mary Magdalen and to all the Apostles. For forty days, various people saw Jesus physically alive after His crucifixion.

Easter is also a celebration of the eternal life we will all experience, and a reminder that what we do in our earthly life will have eternal consequences in the next life. Our good works, our obedience to the Laws of God, and all those activities which helped others will affect the kind of eternal life we will have with our risen and glorified bodies.

St. Catherine of Siena, whose feast day we celebrate on April 29, understood the meaning of eternal life with our glorified bodies. She was adopted as the patron saint of homeschooling Catholic leaders back in the 1980s when we gathered together in the Chicago area to discuss Catholic homeschooling issues.

St. Catherine was the 24th child born to a working family in Siena in northern Italy in 1347. Her brothers grew up helping their father in his fairly prosperous wool-dying shop. He had workshops, a farm, and a vineyard, all bringing in money needed for his large family. The brothers helped the father, while Catherine and her sisters learned the household duties. Her “homeschooling” did not include reading or writing or arithmetic, but it did include learning and living and practicing the Catholic Faith. The family was known for their generosity and acts of mercy in the community as well as their active participation in the parish church.

Catherine loved the local St. Dominic parish where she went to daily Mass. The Dominican priests would visit her home regularly, so she continually heard about St. Dominic. At six years old, Catherine had a vision of St. Dominic which affected her permanently. Stories in the area say that after that vision, Catherine was no longer the same.

Catherine began to lead an intensive private prayer life, often going to her little room, the size of a modern closet, to pray and meditate. She was quiet in the family, and accepted unkind remarks from her siblings and even from her mother. As a young girl, she would say many Rosaries.

In her teen years, her parents pressured her frequently to prepare herself for marriage. In response, Catherine cut off her beautiful, long, golden, brown hair, an unusual color for Italian girls, to discourage her mother.

When Catherine was twelve years old, the insistence that she marry grew so overwhelming that Catherine became sickly and had to remain in bed. Catherine begged her mother to let her join the Third Order of St. Dominic, and thus so be able to live at home and practice her prayer life. Her mother eventually gave permission, and Catherine, a young teen, began an even stronger prayer life.

Catherine spent several years in private prayer in her home and in the church, but was called by Jesus in a vision to do more for the community. She began hospital work to help the sick and the poor. The local citizens respected her and even asked for her help and opinions regarding the “politics” of the town. She tried to learn to read, but was unsuccessful until granted the ability in a miracle. She never was able to pronounce individual letters, only words. When she was older, she dictated her letters to someone who would write them for her.

Catherine led an extremely holy life, and became influential in the community; so much so, that they asked her to represent Siena at a Dominican conference. She sent letters to influential people to keep the peace among the Italian cities. She dictated numerous letters to priests, to bishops, and even to Pope Gregory XI to persuade him to leave Avignon, France, and return the papacy to Rome.

Like St. Francis of Assisi, Catherine was given the blessing of the stigmata, the miraculous bleeding in her hands and feet, just as Jesus suffered in His crucifixion. However, it was not discovered until Catherine’s death in Rome at the age of thirty-three. Catherine’s dead body never deteriorated; it remains incorrupt to this day. Pope Pius II canonized St. Catherine in 1461. Pope Pius XII declared St. Catherine of Siena a Patron Saint of Italy, along with St. Francis of Assisi.

St. Catherine’s writings and visits with influential people in powerful Church and political positions was extremely rare for a woman in the 1300s. Her life of prayer and dedication to those in need, and her willingness to deal with people in positions of power and influence, can be a source of inspiration to homeschooling parents and students.

The incorrupt body of St. Catherine and several other saints is a physical reminder to the world that Jesus rose with a glorified Body and that we are all someday going to rise with a physical body.
St. Catherine of Siena is an inspiration to all Seton homeschooling students and parents. Living a life of study and prayer in accord with the teachings of Jesus surely will result in our own glorious bodily resurrection and in everlasting happiness with Jesus in Heaven.

St. Catherine of Siena, pray for us.