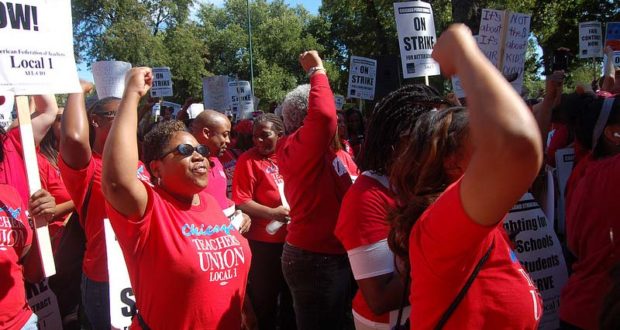 By the time you read this, the Chicago Public Schools (CPS) may have already settled their strike with the Chicago Teachers’ Union (CTU) and children will be back in school. Friday morning’s Chicago Tribune, September 14, indicates that CPS is caving in to union demands, so that seems likely to happen. Mayor Rahm Emmanuel has little choice. The Democratic powers in Chicago depend on the unions and public sector workers to keep them in office. That’s the reason Rahm’s former boss, President Barack Obama, has kept mum. He needs those unions too.

For the record, money was not the issue. The 27,000 teachers and support staff were offered a whopping, budget-busting 16% increase over the next four years, at a time when the city is broke and many Chicagoans are happy to be working at all. Many CPS families must not be working steady as 85% of students qualify for reduced-price or free meals at school, which means a family of three makes less than $28,000 per year. CTU teachers are among the highest paid in the country already with an average income of $76,000 per year, but they do not hesitate to demand that Chicago taxpayers — average income $47,000 per year — pay a premium to ransom their children.

If it’s not about money, than what is it about? It’s about power. It’s about the teachers rejecting any accountability for the job that they are being handsomely paid to do. Presently, any teacher, no matter how ineffective at the job, gets raises based on years teaching and educational attainment. Teachers are fighting to ensure that raises are NOT tied to student achievement; in other words, how well they do their job. Union regulations make it so difficult to fire an incompetent teacher that most principals do not even try.

CPS has no cash reserves and teachers rightly complain about dilapidated buildings, outdated textbooks, and scant school supplies. Educators cite parents who take no responsibility for their children, and the hostile, crime-ridden neighborhoods the students hail from. Of course, when the district caves to union demands there will be less money to update buildings, buy supplies, and offer after-school safe havens. In other words, the district is one immense, mismanaged, irredeemable disaster and the same situation is echoed across the country.

Our only practical course of action is to admit that our nation’s public schools have evolved into a machine that serves adults — politicians, teachers, and fat cat administrators — far better than children. Mayor Rahm Emmanuel’s own children attend the prestigious University of Chicago Lab School, as did the Obama children before they moved to WashingtonD.C. In Washington, the Obama daughters enrolled in Sidwell Friends, the same school Presidents Clinton and Carter sent their children. Politicians who vigorously defend the public system would not dream of sending their own children to them.

It serves the entire nation to have an educated populace. Taxpayer-funded education does make sense, but concerned parents are being taxed twice. First, they pay property taxes to fund the bloated public school system and then they pay tuition for private or home school. Families that simply cannot afford to pay may enter the charter school lottery and pray their children catch a break.

Enough! Let every family with a school-aged child get a voucher good for the price of an elementary or high school education in the school, or homeschool of their choice. Some parents in excellent public districts may opt to remain in and support their local public school. Other parents will choose private or parochial schools that reinforce their family values. Homeschooling families can use their vouchers for tuition, museum memberships, home computers, and tutors for math, science or foreign language. Children with diagnosed special educational needs will get larger vouchers and schools will open to serve them as well.

As long as the money is given directly to the family, there are no First Amendment religious issues. After all, the GI Bill has paid for veterans to attend religious institutions for decades without supporting any particular religion. The time has come to rescue American children from a system that serves them so poorly. The time is now!