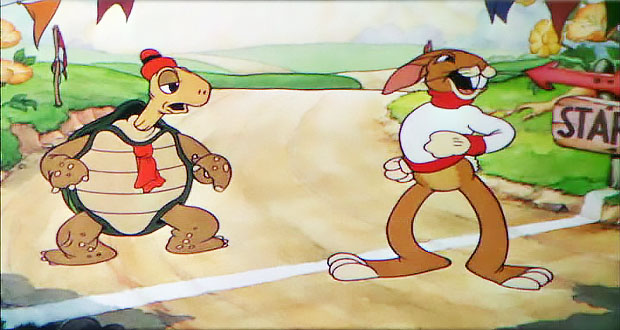 The Tortoise and the Hare in the Classroom

Most everyone is familiar with the fable of the tortoise and the hare, but have you ever thought about what lessons this fable holds for education?

The fable is a cautionary tale about pride and overconfidence and the rewards of perseverance. The story, however, has deeper significance. The hare is the symbol of the naturally gifted person. Nature has made him the fastest animal in the forest. The tortoise is the person seemingly bereft of natural talent, but exercising the virtue of perseverance, he overcomes his lack of natural ability by hard work.

Most people are either tortoises or hares in various aspects of their lives. They might be gifted in some areas, but not in others. I have personally witnessed this dynamic over many years of academic work. Some people are simply intellectually gifted, and for others, learning comes with difficulty. Of course there is a lot of room in between, but you will often find that even for “average” students, they have strengths in certain subjects and weaknesses in others. It is the constant temptation for the gifted person to grow lax and overconfident like the hare, and for the person who struggles to lose hope.

The fabled tortoise does not give up—if he had, it would make a poor story. Unfortunately, many tortoises of the world do give up, a little each day. I certainly know that I have given up myself in many areas, and I imagine that we can all think of areas in our lives where something seemed to come easier to everyone else, so we just gave up on ever being good at that thing.

In the Classroom Environment

If we take this fable into the classroom, we see how this dynamic plays out amongst many students striving after some form of academic finish line. There are always a few students who are at the head of a class—the hares. For them, the pace of the class comes easily—too easily in fact. It isn’t much of a challenge to stay ahead of the rest of the class. Especially if the students are trying to “fit in” amongst their peers, the temptation will be to grow lax, resting on the laurels of their head start in life.

They maintain their advantage until high school, but without academic discipline, have a difficult time persevering with school work in the face of assignments (particularly writing assignments for boys) which they might find truly difficult for the first time. Without the habit of forcing themselves to excel in difficulty, that difficulty can overwhelm them and become a stumbling block.

Students who are not so naturally gifted—the tortoises—rarely get ahead in elementary school, and this is where they face their greatest challenge. If they can develop good study habits and they put in hard work, they will reach the finish line, but with the feeling that they will always be behind the other students. Hope is lost and many resign themselves to their perceived academic inferiority.

The dangers of both laxity in the hares and hopelessness of the tortoises are exacerbated in the classroom environment in which children are placed with a large group and their successes and failures are experienced as some kind of function of their artificial peer society.

In the Homeschool Environment

One of the chief academic benefits of homeschooling is that students can move at their own pace. Without the confines of a classroom in which a teacher must move slowly enough for the tortoises yet quickly enough for the hares—which really is an impossible task when you think about it—children have the freedom and the motivation to excel.

As a bit of anecdotal evidence, I saw this play out in my own life. I attended Catholic school until 5th grade when my mother pulled me out of school (for reasons both religious and social) in order to homeschool with Seton. In school, I was a fairly average student. Mostly B’s with some A’s mixed in, but I also ended up in detention regularly for not completing homework assignments. I never considered myself particularly smart, and so resigning myself to my status in school, tried to establish my feelings of self-worth and excellence in non-academic areas.

Homeschooling allowed me the freedom to realize I was actually pretty good in areas such as math, but just had a much harder time with other areas such as writing. I also found the freedom to study more unusual subjects. I became an expert in world capitals and flags. It might sound a little odd (but I assure you it has been useful), and it provided me with a feeling of truly being a hare in at least one academic area. I knew something better than any adult I knew.

That taste of being a hare was very important, and I am convinced it is something I would not have gotten had I stayed in the classroom. By the end of elementary school, I was earning straight A’s and scoring in the 99th percentile on standardized tests (not uncommon for homeschoolers, I later found out).

To be honest, I think all of the homeschoolers I have met have seemed like hares. I doubt they started off that way, but being able to move at their own pace and find mastery in certain areas gave them the habits and motivation to be academically excellent.