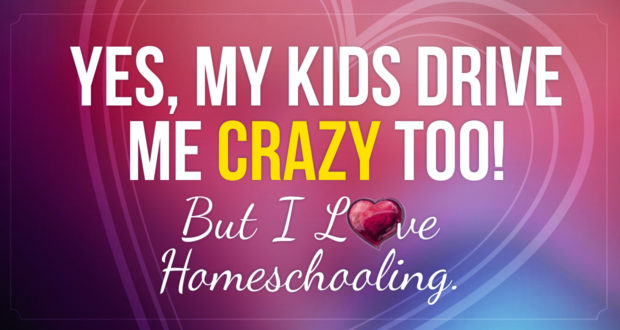 Yes, My Kids Drive Me Crazy Too! But I Love Homeschooling.

“I could never homeschool my kids! They drive me crazy!”

“You spend all day with your kids? I would go crazy!”

I hear these statements all the time. From the moment I say I am a homeschooler, I am met typically with either excitement or amazement. The excitement usually comes from a fellow homeschooler or someone who has been thinking about homeschooling.

The amazement comes from one of those parents who send their children off to school every day and can’t imagine not having that time to themselves.

I tell these people that my kids drive me crazy too. They do typical kid things like not cleaning their room and arguing with one another over silly things. That’s a part of being a parent. I am sure I drive my kids crazy as well. I constantly test new recipes on them and monitor their television and video game activity. I even talk to their friends (gasp!). That too is part of being a parent. I think all families experience these ups and downs. I assure my non-homeschooling peers that I am not a saint and try to appease their worries that I am some holder of Job-level patience.

However, the truth is that I sometimes feel sympathy for these parents. As a homeschooler, I often lose track of when the kids in the local schools are on break from school. But I usually can tell quickly with a trip to the grocery store. On a regular school day, there are parents with babies and toddlers in the stores.

If I do see older children with their families, they are commonly other homeschoolers. But on a day when school is out, the sounds of children fill the stores… along with the sounds of parents screaming at their children in frustration. Don’t get me wrong, some of them aren’t screaming. Some are talking through their teeth in that “one last time” way.

From time to time these parents give each other those knowing looks, and sometimes I return them. I can empathize with having to take a bunch of kids grocery shopping. The requests for the cereal that no one ever eats and arguments over who gets to push the grocery cart, can become tedious.

The moment I was able to leave my oldest to babysit, I am sure I spent longer than normal in the store. I think it might have been the first trip in years that did not leave me feeling as if I had left tons of items behind or wondering what extra surprise item was in the basket.

But then they say, “I’ll be so glad when school starts again.” I used to be that parent. Weary of having to find something to entertain my children on their days off, frustrated at the high cost of after school and summer camps, and exhausted at the constant back and forth from one place to another to find necessary items like a particular type of folder or a specific color shirt for a special day.

Then I began homeschooling and things changed. No, there wasn’t an immediate change in my attitude or my children. It came over time as I watched my children become more loving  not only to one another, but also to others. It happened as I watched my oldest child become so deep in her faith that she actually cried when a CYO camp ended.

It happened when my five-year-old, the “shy” one, led a table of eight (including four adults), in the grace before meals. The list goes on and on. Instead of children who needed constant reminders of how to be a well behaved child, I saw the beginnings of the adults I wanted them to become.

Of course, there are the other perks to being a homeschooler. A trip to the local discount retail store a few weeks before school begins, and I gratefully remember that I do not have to buy school supplies according to a list that seems never ending. I listen to my fellow parents discuss how much they worry that their child will get “that” teacher or have to put up with the kid who bullies other kids. I know all parents don’t have these problems and actually enjoy time with their children.

I know all schools are not horrible places. As a military brat, I went to ten different schools and can verify there are some excellent schools out there.

But when we started homeschooling, the day to day interaction of my children changed. Instead of focusing so much on trying to balance school, afterschool activities and family time, we were able to focus on combining these in a healthy way. Combining them meant we could blend our family time with a trip to the zoo to learn about animals, or a math lesson with a cooking lesson.

We started with a very good secular curriculum, but I felt that I was missing something and wanted to add religion. We were on the way to converting as a family to Catholicism when I discovered Seton. It was actually suggested to me by a nun at one of the local Catholic schools. Seton was the missing piece.

Not only did Seton give me the extra information I needed as a convert, but it helped me ground my children even more to the faith and life I wanted them to live. They are learning to live their faith day by day and love one another. That makes me feel better about sending them out into the world.

My children still argue and I still have moments where I need to get away. Again, that’s part of being a parent. But the words in the arguments are less harsh, the moments of stress are less often and the times in between are filled with more love and appreciation that we get to spend this much time together.

Not frustration that we have to spend it together.