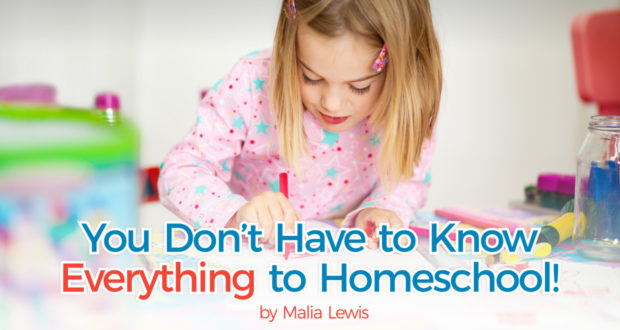 You Don’t Have to Know Everything to Homeschool!

When I began homeschooling, my oldest was in fourth grade, so I figured there wouldn’t be many challenges right away. I had finished college plus graduate school, so elementary grades and lower shouldn’t be a problem. I was right…this was a breeze and we whipped through the first years.

But somewhere along the way during the later years, I started to see the holes in my own learning. Here’s an example: People around my age probably remember the mnemonic device Please Excuse My Dear Aunt Sally. For those unfamiliar (or just forgot), it’s to help a student remember the order of operations in certain math equations. So P(arentheses), E(xponent), M(ultiply), D(ivide), A(dd), and S(ubtract). Easy, right?

Well, I discovered that I had not actually learned it but had only memorized it. So not only was I using it incorrectly, I was teaching my child to use it incorrectly. I felt horrible.

To be honest, this shouldn’t have been a complete surprise. I remember hitting a brick wall at a certain point in college because I hadn’t really learned certain materials. I had memorized basic facts and been able to repeat them when appropriate. This isn’t to say that all kids who are in brick and mortar schools do not actually learn. But having a good memory for facts and figures made it easy for me to breeze through certain subjects in school.

I also was an Army Brat who changed schools frequently, so my learning was very inconsistent most of the time. Memorization became my weapon of choice when presented with information that I needed to learn quickly.

As a homeschooling mom, I started to have doubts. I worried that the people who warned me that homeschooling should not be done in later years were right. I needed to turn my child over to the professionals and let them do their job before I completely damaged her. Then I went and made things worse for myself by adding in Seton’s Catholic curriculum. I wasn’t fully Catholic yet. I was going through RCIA and had some pretty base level knowledge from my Catholic family roots, but that wasn’t enough to teach my children. What was I doing!

Then one day my oldest came home from CCD excited about something she had learned that day. It was all about how some souls go to Portugal.

No, that is not a typo… she said Portugal.

(In her teacher’s defense, my daughter misheard the word. Her teacher was excellent.) In our attempts to get her to understand that it was Purgatory and not Portugal, I decided to use some Catholic books for younger children. What an eye opener that was for me!

“There’s nothing that can help you understand your beliefs more than trying to explain them to an inquisitive child.”

Having to simplify concepts for a child meant that I had to truly understand what I was teaching. So I had to learn “through the eyes of a child.” I started to see things as if it were the first time, instead of it being just a refresher or a review. I started with religion, but found myself doing the same thing with other subjects as well. Even subjects I enjoyed in school became new again because I was looking at them with fresh eyes. Along the way, I shed the doubts and fears that had been weighing on me. I now was learning alongside my children.

Some subjects come easy for me, such as history and science. But a lot of things have changed since I took these courses, and it doesn’t make me a failure to admit that. It doesn’t mean that I am not qualified to teach my child. What it does mean is that I may have to take the lesson plan and read it over before teaching. If there is a topic that I am unfamiliar with or can’t recall, I can prepare myself first. This is completely okay and acceptable.

Quite often, it seems that I learn a new way of doing things. Just like in the PEMDAS example above, I have a moment of realizing the way I learned it may not have been the best way. At least once a week, I find myself saying out loud, “Why didn’t I learn it this way?” Indeed, in some instances, I find that the way I learned something actually works better for one child than it does for another. This is what homeschooling should be about: making sure the child learns the concept.

To parents who are considering homeschooling, those already homeschooling and everyone in between: you can do this. You don’t need to have a specialized degree in a certain subject to homeschool your children.

Asking for help does not mean you are unqualified and it certainly doesn’t mean you should stop homeschooling.

What it means is that you want the best for your child and will use available resources to make that happen.

Malia Lewis is a freelance writer, homeschooling mom, Army Brat, and Army wife. She is also a convert to the Catholic Faith who calls Louisiana home, so she jokes that “the Catholicism was just waiting for me to come back.” She sometimes attempts to sew and do other crafts which she blogs about, in between testing new recipes on her family. In the last five years, she has moved four times and has many more moves to go.