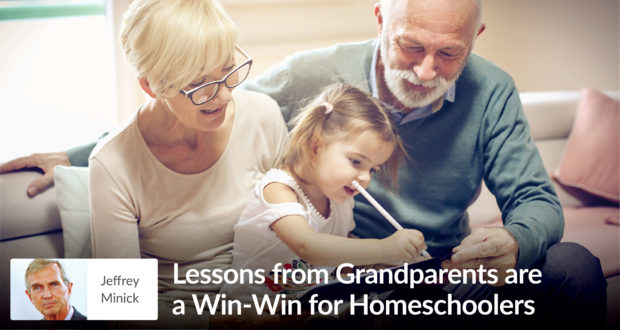 Lessons from Grandparents are a Win-Win for Homeschoolers

Looking for who might bring valuable gifts and talents to your school? Consider grandparents, neighbors, and friends as they are often honored to help you.

Charlie is stuck on writing fractions as percents in his Saxon Math 7/6 and is yelling for your help. The twins can’t make head or tails out of diagramming sentences. Lizette is begging you to read The Tale of Three Trees for the third time that day.

Henry, who has a cold and whose nose is running faster than an Olympic sprinter, needs to go to the potty NOW. The baby kept you up half the night. It’s past time to make the kids some lunch, your husband messages you he won’t be home until late that night, and you can’t remember whether you brushed your teeth that morning.

At this point, some homeschool teachers—even veterans with three or four years under the belt—are tempted to throw up their hands, pop a flick into the DVD player, and call it a day. Others fantasize about living alone on a remote island in the Pacific. Still others plod stolidly onward, grim as soldiers making a last, desperate charge.

Time, perhaps, to get some help.

If you’re having days like the one described above, or even better, if you want to broaden your children’s educational experiences, consider some people who might bring valuable gifts and talents to your school.

Grandparents and Their Library of Knowledge

First and foremost on this list are grandparents. In my thirty plus years of helping homeschool my children and offering seminars to homeschoolers, I have again and again witnessed grandparents finding joy and satisfaction as homeschool teachers and mentors.

Here in Front Royal, one grandfather I know well teaches the Seton curriculum to his three elementary school aged grandchildren two mornings a week, giving his daughter the opportunity to teach and play with the three little ones.

You live in Miami and your parents live in Boston? Use the phone or Skype for tutoring. Set up a schedule, pop open the computer, and have Johnny and Mary do their math with Grandma, who has a copy of the textbook. Not only will they learn long division, but they also will develop a deeper rapport with their grandmother.

Grandparents and great-grandparents also can serve as a gold mine of history for your children. “When an old person dies,” so the adage runs, “a library is lost,” and those of us who have lost parents or other beloved elders recall with regret the many questions we failed to ask them. Have your children ask their grandparents about their lives, bearing in mind that those lives stretch far back into time.

My father, for example, knew his Uncle Marion McNickle, who’d fought in the Civil War, which means that my children knew a man—my dad passed away two years ago—who in turn personally listened to the stories of a Civil War veteran.

Another instance: my children several times met Irene Harrison, the 106-year-old daughter of Frank Seiberling, inventor and founder of Goodyear Tires. When I asked her who was the greatest president of her lifetime, the conservative Mrs. Harrison answered, “Roosevelt!” Given her politics, this reply took me aback until Mrs. Harrison clarified: “Theodore Roosevelt was the best!” She was ten years old when TR entered the White House.

Finally, grandparents often possess skills that might contribute enormously to your children’s education. Was your mom in banking? Have her teach your children the rudiments of saving and investing. Was your dad a bricklayer? Have him teach that skill, even in a rudimentary way, to your children. Do your parents live on a farm in Kansas while you and your family are in Los Angeles? Ship the kids off for a couple of weeks in the summer and give them a taste of farm life.

If the grandparents are deceased or otherwise unable to help, try visiting older people in nursing homes or eldercare. With that visit your child performs a Corporal Work of Mercy while at the same time hearing first-hand tales from our nation’s past.

In Asheville, several homeschoolers I knew joined a project where they would go once a week to the VA hospital and interview veterans. All of them came away from that experience with a greater understanding of the sacrifices and deeds that have helped make America great.

Mentors We Meet Every Day

Then there are the mentors and teachers we encounter every day. Unless we are living on that remote island in the Pacific, we daily brush elbows with others who can help instruct our children.

That kind neighbor who works as a carpenter; Aunt Elizabeth who sells online greeting cards that she has designed and made by hand; Mr. Fiske, the friend who owns the local bakery; Mrs. Escobedo, the widow who lives alone next door and who taught Latin and Spanish in the local Catholic school for thirty-five years: all these people and scores of others are walking, talking libraries.

Such mentors can exert a tremendous influence on the lives of our young people. An example: my youngest son loved basketball. He joined the homeschool basketball team in Asheville, North Carolina, went on to play for Christendom College, and is today the coach there for the men’s basketball team. While in high school, my son’s coach was a family physician, a homeschool dad whose children I had helped instruct through my seminars.

Coach R is a standup guy, a devout Presbyterian and a great coach who compiled an impressive record of wins. But the best lessons Jeremy and other young men learned from this fine man came not from the basketball court but from the car rides to the games, some of which were three and four hours away.

During that time, Coach instructed the boys on contemporary events, politics, United States history, what to look for in a wife, what to expect from marriage, the importance of education and work, and a host of other topics. Coach R is a fine man, one of the most admirable men I have ever known, and I am eternally grateful for his influence on my son and on the other boys he mentored.

The world is awash with talented people, with teachers who don’t even realize they have the capacity for teaching. When you find some of these people, approach them without hesitation and ask whether they are willing to share their gifts and talents.

If your teenage daughter expresses an interest in law, ask your attorney friend if she can volunteer in his office, shadowing him as he goes about his day. If your next-door neighbor is a gourmet cook, ask if the children can help her in the kitchen.

If you find yourself in need of help, or if you want to, look to the people around you. Knock on those library doors. You may be surprised at what you find.

And here’s a secret: most of these people—grandparents, neighbors, and friends—will be flattered by your request and honored to help you.

Jeff Minick is the Latin Counselor at Seton Home Study School. He has spent the last twenty-five years teaching Henle Latin to his children and hundreds of home-educated students, guiding many through their preparation for the Advanced Placement Latin examination. Jeff is the father of four children, all of whom were homeschooled, and grandfather to twenty-one grandchildren, three of whom he homeschools.
education elders grandparents help history homeschool homeschooling influence jeff jeffminick libraries mentors minick neighbors talents teachers 2018-09-10
Contributing Writers