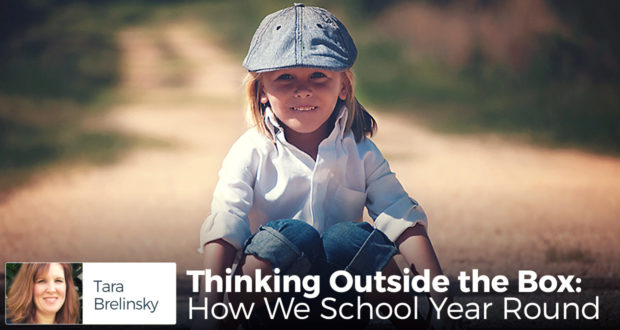 Thinking Outside the Box: How We School Year Round

Tara Brelinsky has battled stress and depression. But with a large family, she’s learned to adapt and thrive – by pacing her homeschooling year-round!

One of the many blessings of homeschooling is that it allows families to think outside of the box.

Whether it be an un-schooling approach or a non-traditional method for inspiring learning, homeschooling parents have a wide latitude when it comes to finding the best fit for their individual family.

Growing up, I attended both Catholic and, later, public institutions of learning. While there were definite differences in the subject matter being taught, as well as the environment I was being taught in, all of them followed the same calendar model: the school year commenced in September, ended in June and was followed by two solid months of summer break.

When I began homeschooling fourteen years ago, I decided to forge a less-conventional path. Our school is in session year-round, and my children rise to their new grades every spring, instead of fall. We try to adhere to a nine weeks on, two weeks off pattern throughout the grade year. (Editor’s note: For general information on year-round schooling, see this article from Education Week).

I’d like to say that I chose this plan because I am exceptionally wise and had the foresight to discern all the advantages such a schedule would afford my crew of eight children. I’d like to claim that status, but really it was more a matter of Divine Providence.

To begin with, I had three rambunctious little boys who needed consistent structure in their days. With the oldest reaching school-age and the next just eleven months behind him, I was eager to get started.

Budgetary constraints affected the timing of our ability to invest in educational supplies. So, when we received a decent-sized tax refund that first February (14 years ago) it seemed appropriate to purchase curriculum before planning a trip to Disney.

Beginning in the Spring

That first spring when those beautiful, new, shrink-wrapped books began arriving on our porch, it was hard to contain my son’s excitement, so I didn’t bother trying. We delved in as soon as I was able to sharpen the pencils.

Psychologically, beginning our new grades in the spring has continued to be a great benefit in our household; just about the time that the winter doldrums set in for most homeschoolers, we are finishing up a grade year.

Then a short time later, as the warm weather returns and the windows get thrown open, crisp new textbooks appear on our doorstep. And excited by the prospect of reaching another rung on the educational ladder, my kids eagerly tear into their new studies.

Not taking an extended break between grade levels also means greater retention of the material. My students usually sail through the earliest lessons in their new books because they haven’t had the time to forget those multiplication tables they just learned.

Tara Brelinsky has battled stress and depression. But with a large family, she’s learned to adapt and thrive – by pacing her homeschooling year-round!

I suppose that is in part why they look forward to the beginning of each new grade level, because the review work is easy for them.

Sticking to a nine weeks on, two weeks off pattern also has ample advantages. It’s amazing how quickly a nine-week quarter passes when you know a two-week break is on the horizon. In practical terms, we log-in roughly the same number of educational days as do traditional institutions, which leaves extra weeks available.

Rather than organize those extra weeks into one long break, I intersperse them throughout the year as needed. That means we occasionally take a three-week break instead of two or we stretch out the nine-week quarter over ten or eleven weeks. On a side note, I plan our calendar one quarter/break period at a time.

Another benefit to this plan that I discovered back when I had only three little balls of energy is that keeping a generally consistent schedule means a more harmonious (mostly) household.

When my boisterous brood has unlimited amounts of unstructured time, chaos reigns.

Our year-round pace also allows for life to interrupt without throwing the whole calendar into a tail spin. I saw that clearly when my family endured a two-year period of suffering. I miscarried four babies, my husband lost his job, and depression sunk me deep into its pit.

Some days it was all that I could do to get up out of bed and go through the motions to keep the children safe and fed. Knowing that we had the wiggle room to stretch out some of our weeks or take mental health days without completely realigning our ending date for the grade year relieved a great deal of stress for me.

As painful as that episode was, it reinforced the wisdom of setting a schedule that fits your family’s needs and goals. The heart of schooling in the home has to do with developing each member of the family.

Yes, it’s about teaching kids to read and write and work within the framework of societal norms, but more than that it is about teaching them how to live, and sometimes living life to the fullest requires us to think outside of the box.

Tara K. E. Brelinsky is a home schooling mother of 8 living children, with 6 more heavenly ones. Married to her childhood sweetheart, they make their home in North Carolina where they teach Natural Family Planning, grow a garden, raise two dogs, a cat, hamster, ducks, roosters and a flock of hens (in addition to all those wonderful kids). Tara studied journalism a lifetime ago in college, but now she writes simply for the glory of God. You can read her musings and inspirations on her blog Blessings In Brelinskyville.
brelinsky home school starting tara tara-brelinsky 2015-09-12
Contributing Writers