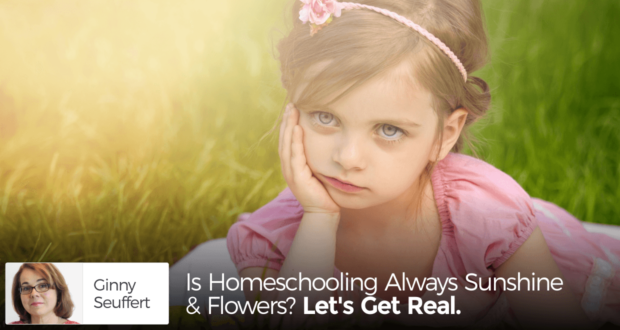 Ginny Seuffert knows well how tough life can be for homeschoolers. When she recalls what she’s achieving, & the history behind it all, she gears up again!

My personal pet peeves include books and authors who present homeschooling as an always fun and sunny alternative to institutional schools.

If you believe some of what is written, you might easily think that our homeschooled children are sitting at their tidy desks, in their neat school clothes, diligently hammering at the books, while begging for more challenging work.

Let’s face it: sometimes the truth is not quite so pretty, making it easy to lose sight of our goals.

My children preferred to run around in the yard and sometimes had to be dragged to their desks. If they finished their assignments, and occasionally even before they finished, they valued play over work.

We kept a pretty strict schedule, but plenty of times, our day was interrupted by family emergencies, unexpected guests or phone calls, and sickness. All of this is part of life, but I have to admit that, at times, cheerfulness can be a struggle for Mom.

To help you cope at these times, Dr. Mary Kay Clark often suggests that parents write down the reasons they decided to homeschool. Be specific with yourselves, make a list, and tape it to a kitchen cabinet. It might say:

When Mom is exhausted after a particularly frustrating day, it is a good practice to look at the list and remind yourself what you are accomplishing in spite of your difficulties.

Your children learn in a truly Catholic, virtue-building setting.

They are receiving top-flight academic preparation from a school with a proven record of excellence.

You are reducing their exposure to a host of modern evils rampant in public schools. Not too bad, after all!

It might also help to take a moment to remember the sacrifices of American Catholics who fought for the right to educate their children in an era of rampant anti-Catholic sentiment. Most parish schools were built by the sacrificial contributions of first generation blue-collar immigrants in the 19th and early 20th centuries.

Providing Catholic education was not simply a duty of every parent, but also the responsibility of the whole Church, and these Catholics took it seriously. Theirs is an inspiring story.

The first Catholic school was established in 1606 in St. Augustine Florida, and hopefully Seton parents and students are aware of the accomplishments of our school patron, Mother Seton, in establishing Catholic schools in the early 19th century.

The parochial school system, as we know it, was instituted in the United States as a reaction against a growing structure of publicly-funded schools that were essentially Protestant. In 1839 and 1840, during the heart of the so-called Nativist movement, the American Bible Society pledged that, “The Bible would be read in every classroom in the nation.” Naturally they meant the King James Version of the Scriptures.

The Eliot School rebellion occurred in 1859, when Catholic 10-year-old Thomas Whall was beaten for refusing to read aloud the King James version of the Ten Commandments in a Boston public school. The assistant principal beat Whall’s hand with a rattan stick for 30 minutes until it was cut and bleeding.

The principal then told all boys who would refuse to recite the King James version of the Commandments to leave the school. One hundred boys left that day. Three hundred left the following day. Some boys reported to school with copies of the Vulgate Commandments, although they were refused admittance.

This led to the creation of the first parochial school in Massachusetts.

The Peak of Parochial Education

By the mid 1960s, Catholic education reached its peak with 4.5 million elementary school pupils, and another million students in Catholic high schools. It is no wonder they were so popular, as they had an extraordinary record of accomplishment.

During these times Catholics maintained a strong religious identity. Strong Catholic schools produced Catholics who, when compared to the general population, were less likely to divorce, contracept, abort their children, or marry outside the Faith. Catholics knew who they were and what they stood for.

Today we hear excuses from professional educators for their failure to teach children from certain socio-economic groups. Until the last quarter of the twentieth century, Catholic schools provided a first rate education to students who, at first glance, seemed unlikely candidates for it.

In a single generation, they gave the children of virtually illiterate, poverty stricken, mostly non-English immigrants from Ireland, Italy, Germany, and Poland a college preparatory education and moved them into the mainstream of society.

A Scholastic Vision of Excellence

Catholic schools kept alive a scholastic vision of education, a vision that extolled excellence, diligence and order. Catholic school students could think. Their textbooks exposed them to the greatest thinkers of the Western civilization and gave them pride in the role Catholics had played in its history.

Catholic schools provided rigorous religious formation that led to strong families and robust vocations to the priesthood and the religious life.

They fostered an appreciation for the Catholic patrimony of sacred art, music, and literature, truly the high point of beauty, culture, and refinement.

The next time you have a really tough day, take a moment to reflect that you and your children are part of something much bigger than your own home school.

You are the latest of a group of dedicated educators and students who kept Catholics vigorous in the practice of their faith, and involved in the important issues of American society.

Be inspired to persevere, with God’s grace, and see the race through to the end.