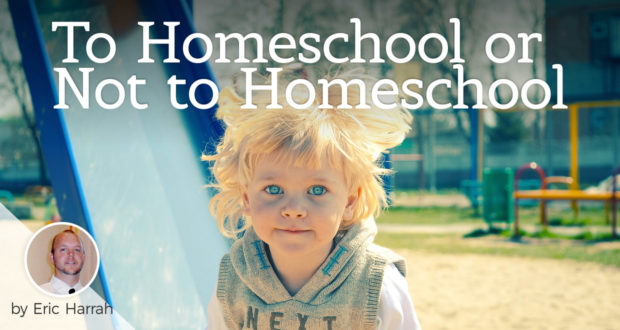 This past year my wife and I answered the long overdue call from the Father to begin homeschooling our children. Our oldest had just entered first grade and we were scared we would never be good enough. The nudge from God began sometime around the start of our daughter’s last year of pre-school, as the idea simply popped into our heads.

Before then, we had never even considered the possibility that we would homeschool, much less the struggle we would face in accepting that it was the right choice for our family. But gradually, little by little, it worked its way into the conversation about what was the best choice for our child: homeschool, Catholic school or public school.

The conversation seemed to drag on for months as we looked at each choice from all of the wrong perspectives. Money was a major concern, especially in light of the cost of private Catholic school. Public school was “free” but we never felt comfortable with sending her there. Homeschool, even then, always seemed like the right choice, the one God was hoping we would make. But selfish excuses and an inability to commit on my part kept us from making the hard choice.

Homeschooling meant sacrifice, and neither one of us was willing to make it.

Back then we were so adamantly against homeschooling that our daughter attended a Catholic kindergarten for her first year of school. It was a terrible year. Almost from day one, my wife wondered if we had made the right decision. She was gone from us for nearly eight hours every day.

Her siblings missed her, we missed her, and she missed us. It felt like a huge part of our family was being ripped away.

To make things worse, we slowly began to notice a subtle change in our daughter’s behavior. At home she was always bubbly and vibrant, full of life and constantly talking. She loves to explain how things work, at least in the way her growing mind understands them. But as the year progressed, she became more and more reserved.

The happy, vibrant child we had raised up till then seemed to be disappearing before our eyes. It made both my wife and I ache for her and the poor decision we had made. But we still weren’t sure homeschool was the right thing to do. It would be hard—harder than anything we had done so far. Would we ever be good enough?

As expected, God nudged us again, and the topic of homeschooling came rushing once more to the forefront of our nightly conversations. We looked at it from every angle we could possibly imagine, and perhaps a few we never thought possible. Yes, money-wise it was far cheaper than Catholic school, but my wife would be at home, by herself, with five small children every day, attempting to educate one while keeping the others in line.

And then of course public school was “free”. Money wasn’t really an issue. Couldn’t we just send her there? Maybe she wasn’t thriving because of the teachers? Maybe it was the environment, and a different school would give her what she needed?

As before, we felt as though we were running in circles. Too many excuses were hurled at us from well-intentioned friends against the possibility of homeschooling. The worldly reasons only made the decision to homeschool that much harder. But God had laid the right choice at our feet, all the while patiently waiting for us to stop our flailing and accept the gift He was giving us: the grace needed to succeed.

Finally, the end of the year came and we had no choice. We had to decide. It was now or never. Do we register her for first grade or accept the calling God is sending us? Do we put her back in school and hope next year is better or take the chance on educating her ourselves?

Since I seemed unable to come to the decision on my own, I asked my daughter what she wanted. “Would you like to stay home and learn from your mommy or do you want to go back and learn from your teachers next year?” She was thrilled with the idea of my wife teaching her.

And suddenly as if a switch had been thrown, my sweet girl was back to her old self, talking non-stop about this thing or that, carrying on about all the exciting stuff she would learn next year. It made me smile seeing how happy she was. So we decided to give it a year and see how it went.

After that it was ordering a curriculum, buying all the materials, preparing a room in the house, finding an umbrella school and other concerns that I had never worried over before. But the worst of which was telling the school we were taking her out the following year to homeschool.

A furious backlash followed that decision, one that took my wife and me completely by surprise.

The same well-intentioned friends suddenly turned into not so well-intentioned acquaintances who had no reservations on informing us of the utter foolishness of our decision. Social media became a minefield where no avenue to safely navigate the internet waters seemed available to us.

We lost many supposed friends. At first we were tempted to back-peddle, wondering if perhaps all of our former friends were right. Were we being foolish? Was this the best thing for our daughter? But God showed us the answer in the form of a kind lady who had given up a promising career as a lawyer to stay home and educate her children.

God had shown her nearly two decades ago that educating her children in the ways of the Lord, putting them ahead of a career, was truly Christ-like. Her focus was not on the temporal but on the eternal. Her children, all in college and high school, were excellent examples of what it means to be a Christian. Seeing that in her and her family, we knew God wanted that for us.

And here we are a year later. First grade is finished and we are looking towards our second year of homeschool when our oldest son will join his big sister. My wife, having endured me accepting a new job, changing states and moving twice, all while plowing through the first year of homeschool, smiles when she thinks of how easy next year will be.

And while I know it won’t be all that easy, we’re both grateful for the great gift God has given us.

Eric Harrah lives in the panhandle of Florida with this wife Elaine and 5 wonderful children, Clarity 7, Liam 5, Evie 4, Everett 2 and Zoey 0. Eric is new to the writing world with several full length creative novels in the works targeted towards young adults. Eric works as an Electrical Engineer for the Defense industry, when he isn’t busy writing. In between, Eric is a martial artist, musician and beach-goer. But more than anything, Eric loves spending time with his kids, teaching them all the wonderful things God’s world has to offer.