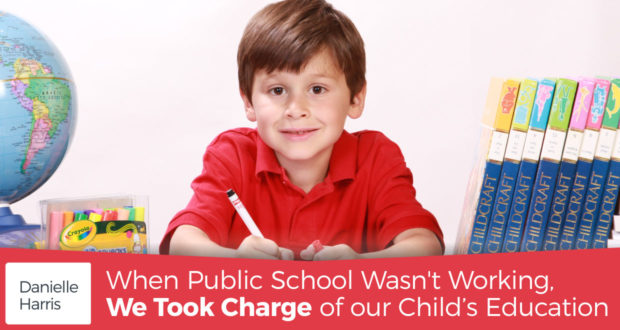 When Public School Wasn’t Working, We Took Charge of our Child’s Education

At the tender age of five, our son was forced to mature. His mother was diagnosed with breast cancer. There was little opportunity to plan or explain our next steps. So the good life, for this only child, was suddenly interrupted.

In a matter of two short weeks, our little boy was forced to age right before our very eyes. Somehow he knew that things were going to get a lot worse before they got better.

We had just returned from a short road trip visiting dear friends in Colorado, when a self-examination revealed an unfamiliar and alarming mass in my right breast.

As I sat in the kitchen and watched him jump on his trampoline, I was overcome with a deep sadness that I could not explain. Somehow I knew the lump I felt was not something to be ignored.

Yet, I was not as concerned for my own well-being as that of my child. I could not fathom the idea of not being present. Two weeks later, the diagnosis came.

My husband and I had made the decision to move our son from his private school to public school after two successful academic years. At the age of five, he tested with an IQ score that qualified him for gifted programming and was promoted to the second grade.

Keeping him in his current school would lead to further acceleration which we did not want. So after careful consideration, we investigated our neighborhood school. Other parents had given us some information about our local elementary school, stating it was a “good school with good teachers.”

To hear this recommendation in the wake of what our family was about to face with my medical challenges was comforting in more ways than you could imagine.

The First Day of Public School

On the first day of school we followed the detailed drop off instructions, sent our beloved son into his new environment and said our prayers. Since parents were discouraged from entering the school, we were anxious to hear all about his first day. According to our son, all he did was take tests and go to recess.

This was alarming to my husband. I explained that typically schools administer some form of baseline assessments during the first days of school to determine where students are functioning academically. I was able to ease his concerns, but I secretly held some of my own.

In our son’s book bag was a letter from his teacher with misspelled words and two grammatical errors. I was alarmed the principal had not caught this prior to approving the letter to be sent home. I was even more concerned that the teacher was requiring mastery from her students of words that she herself had not spelled correctly.

When homework emerged, a spelling list with pre-primer and primer words and a cut and paste activity for the word family –at and –ap were all we found. It was during the second week of school that my husband and I knew this may not be the best educational option for our child.

At the Parent-Teacher Meeting

On the eighth day of the school year, we attended an open house with a fifteen minute parent meeting with our son’s teacher prior to touring the school. The meeting began with the teacher sharing that she had academic concerns with our child.

She also did not understand how a five year old could be in second grade and wanted to know our expectations of her. In the first ten minutes of the conversation, the teacher managed to tell us she had academic concerns seven times. That averages to about one time per minute!

Then came his math baseline assessment. Contained in a manila folder were papers given to our son with his name written neatly in his cursive writing. The teacher pulled out a mathematics assessment and began to point out all of our child’s shortcomings.

Then she made it to a question where she wanted to demonstrate his inability to count money. Her proof was a mathematics question where the instructions were to write the value of the coins represented. The question looked like this:

I was very confused. My husband and I both have college degrees. Even with both of my Master’s Degrees, I did not understand the intended outcome.

As I sat there and listened to her talk about everything, there was no mention of content and pedagogy, best teaching practices, or second grade standards. I attempted to remain unaffected by her discourse, but then two things came to mind.

Secondly, Friday would be his last day of attendance at this school. The decision was swift and abrupt, but as parents we realized the longer we allowed him to remain in an environment that was teaching him basic concepts that made no sense to him or us, the larger the learning loss our son would experience.

At the end of the second week of school, our family experienced two significant events. We made the decision to homeschool our son beginning that day, and I lost all of my hair after my first chemotherapy treatment.

However, I am happy to report that the decision to homeschool our son has been one of the best decisions our family has made. In addition to basic content knowledge covered in the curriculum materials used, we also get to teach him in the content areas that typical private and public schools do not cover, such as Latin, Geography, and Spanish.

Homeschooling allows us to eat together as a family and has increased our family time. We have a flexibility in our schedule that we once did not have because traditional schooling defined our family schedule.

I am proud that we can provide the quality education our son deserves from the comfort of our home. Although our expectations are extremely high, I am pleased to report that he meets every challenge. We have continued to teach mathematics to our son with an emphasis on identifying characteristics of coins.

In our homeschool, teaching the person and symbol on each coin holds much more value and validity than knowing the first letter in the coin’s name. And while a combination of factors, such as a cancer diagnosis and a lack of great school options, influenced our decision to homeschool, it is the success as a student that our son experiences each day that compels us to continue as a homeschool family.

Danielle Harris is a former PK – 12 public school educator and administrator with over ten years experience. Her family now homeschools their son and provides helpful tips to other families who are considering homeschool.