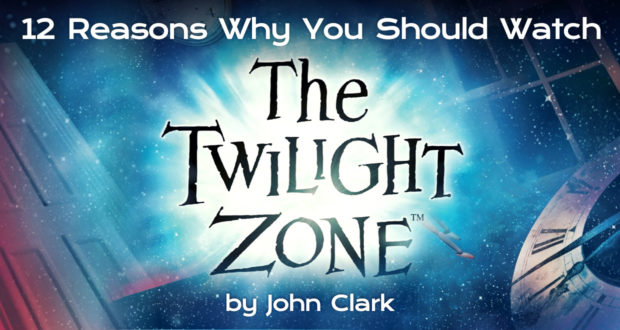 12 Reasons Why You Should Watch The Twilight Zone

Many a night I find myself searching through Netflix for a good movie or show—one that is both uplifting and free of the immorality that plagues modern motion pictures. As you might suspect, I am often disappointed with the selection.

Most nights, I wind up watching an old show like Columbo or The Rockford Files. There’s another that I have been watching a lot lately. It’s one that my brothers and I used to watch every weeknight after it was already in syndication. It’s called The Twilight Zone.

The Twilight Zone takes us into the mind of Rod Serling, who was an underrated observer of human nature and culture in the Twentieth Century. That is reason enough the watch the show, but the stories are top notch.

I am always searching for movies with a good message, because without a good message, movies and shows must succeed purely on the level of entertainment, and most shows fail on that level. The Twilight Zone succeeded brilliantly on both counts.

The final episode of The Twilight Zone may have aired over fifty years ago, but many of its observations are, as Serling might say, “as timeless as infinity.” You might even say it has many Catholic elements. As I watched the show as a child, most of these elements escaped me, but now I understand the deep level of significance that Serling was after.

So if you’re looking for a new show to devote your time to, you aren’t likely find a better one. As J. J. Abrams, one of today’s finest directors, said: “The Twilight Zone at its best is better than anything else I’ve ever seen on television.”

Here are twelve of my favorites.

Capturing the pain that man feels of being unable to return to childhood, this episode hypothesizes what it would be like to return home, if only for a few brief moments. It’s also a recognition that the insistence on becoming the children of yesterday can have repercussions on the children of today. While it might be a nostalgic experience, sooner or later, adults must accept their reality.

Ultimately, we must leave childhood to children.

“Man is by nature a social animal; an individual who is unsocial naturally and not accidentally is either beneath our notice or more than human…Anyone who either cannot lead the common life or is so self-sufficient as not to need to, and therefore does not partake of society, is either a beast or a god.”

And, we are not gods.

In the first of a few episodes with such a theme, Serling walks us through the slow insanity that occurs when man has no human contact. This story might make you feel a little happier about the people around you.

A man named Rocky Valentine dies while running away from an armed robbery. When he wakes up in the next life, he can’t figure out why he is allowed an eternal reward. Or is he?

Walter Bedeker is plagued with hypochondria born of self-importance. One night, while lamenting his short time on earth, Bedeker receives a visit from the devil, who offers him indestructability and immortality in exchange for his soul. But as Bedeker quickly discovers, immortality can have a downside.

Four astronauts crash land… somewhere. With a lack of water, made worse by intense heat, the men attempt to survive—and some attempt more than others.

6. The Monsters are Due on Maple Street (Season 1)

In the absence of real monsters and villians, sometimes man creates his own. When the telephones, cars, and machines on Maple Street, USA begin to do strange things, its residents are sure that someone is to blame. Someone must be to blame.

“There are weapons that are simply thoughts, attitudes, prejudices, to be found only in the minds of men. For the record, prejudices can kill, and suspicion can destroy; and a thoughtless, frightened search for a scapegoat has a fallout all of its own for the children and the children yet unborn. And the pity of it is that these things cannot be confined to The Twilight Zone.”

The subject of the story, Patient 307, has a problem: within a totalitarian society that mandates aesthetical uniformity, she is not considered beautiful. Since she must fit in to society, doctors are called in to help. But that prompts us to ask a deeper question: What is beauty?

Whenever we define beauty as a skin-deep quality—whatever that definition may be—we make a mockery of what beauty is all about.

Mr. Wordsworth, perhaps the last librarian in the country, has been declared obsolete by the government. To make matters worse, Wordsworth also believes in God. And living under a regime that punishes both reading and theism, he is unanimously sentenced to death. Mr. Wordsworth is allowed one final freedom: to choose the time, place, and method for his capital punishment.

However, the all-powerful state is about to discover that it is not as powerful as it thought.

When their car breaks down in a small town in Ohio, a newlywed couple goes to lunch in a small diner to wait for car repair. Once inside, they find a little coin-operated machine/napkin holder calling itself The Mystic Seer. For a penny at a time, this little machine with a plastic devil on top issues a pre-printed card that claims to answer every question you ask it. As he feeds it pennies, the man begins to wonder how it knows everything about their lives.

The story is a haunting commentary on the dangers of superstition. Obsessions can dictate our lives and drain our hopes—if we let them.

A few months ago, Pope Francis consoled a little boy who had lost his dog with the idea that the boy’s dog might be in Heaven. That spurred a debate among theologians about whether dogs can actually go to Heaven.

Rod Serling examined this question fifty years ago, and not just about whether they can go, but if they can help us get there.

In order to save our lives against potential dangers in the future, we can take so many precautions that they damage our relationships in the present. In this episode, a local physician has taken a precaution to protect his family by building a bomb shelter. But his neighbors, who failed to take similar precautions, want protection too.

This episode has a lot of wonderful touches. Notice the little boys, who—as their parents act like wild beasts, desperate to save their own lives—quietly and happily enjoy the remnants of birthday cake.

Former Nazi Captain Lutze makes a nostalgic return to Dachau, where he was once the inflictor of unspeakable pain and human misery. Hoping to relive these horrifying memories, he meets up with a few souls he hasn’t seen in a while.

At the end of the episode, Serling offers this admonition:

“All the Dachaus must remain standing. The Dachaus, the Belsens, the Buchenwalds, the Auschwitzes. All of them. They must remain standing because they are a monument to a moment in time when some men decided to turn the earth into a graveyard. Into it, they shoveled all of their reason, their logic, their knowledge. But worst of all, their conscience. And the moment we forget this—the moment we cease to be haunted by its remembrance—then we become the grave diggers.”