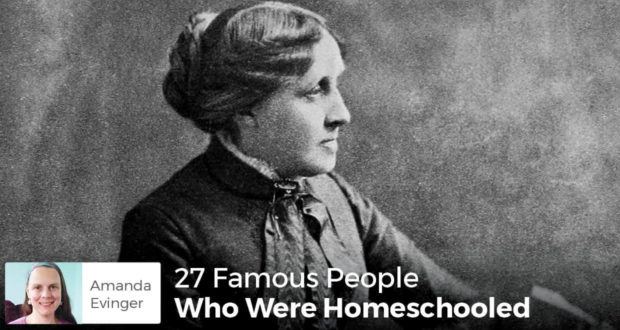 27 Famous People Who Were Homeschooled

Who’s your favorite? Amanda Evinger, homeschooling Mom and author, shares a list of 27 famous people who were homeschooled, giving inspiration to all of us.

When we set out to do something daring, it’s inspiring to know that other admirable people are doing it too and that another hero has done it in the past — and it worked. In the case of Mozart, it’s assuring to know that it did more than just “work.” It floored the world.

This “something” is homeschooling, an endeavor which takes some serious guts to pursue and stick with, day by day, school year by school year. And, thankfully, our God is always ready to give us homeschoolers a “David and Goliath” win when we need it most.

Recently, I spent some time reflecting on the tremendously positive impact that a homeschool education can have on a child and came across this list of famous homeschooled people: Reading down the list, I became astounded!

How incredible to see the fruit of good parenting and homebound education. In addition to Mozart, the list may be quite surprising to many unfamiliar with the value of homeschooling, as it lists most talented and socially accepted individuals such as:

George Washington (b. 1732), first president of the United States.
Thomas Jefferson (b.1743), third president of the United States.
James Madison (b. 1751), fourth president of the United States.
Alexander Hamilton (b.1757), first secretary of the treasury of the United States .
John Quincy Adams (b. 1767), sixth president of the United States.
Daniel Webster (b. 1782), served in both U.S. House of Representatives and Senate, Secretary of State of United States.
Florence Nightingale (b. 1820), founder of modern nursing.
Louisa May Alcott (b. 1832), American novelist.
Alexander Graham Bell (b. 1848), inventor, homeschooled by his mother.
Lewis Carroll (b. 1832), mathematician and author of Alice in Wonderland.
Laura Ingalls Wilder (b. 1867), author of the Little House series of novels.
Edith Claypole and Agnes Claypole (b. 1870), twin sister scientists.
Robert Frost (b. 1874), American poet.
Franklin D. Roosevelt (b. 1882), 32nd President of the United States, homeschooled by parents and private tutors.
Virginia Woolf (b. 1882), English novelist and a central figure in the influential Bloomsbury Group of intellectuals.
Pearl S. Buck (b. 1892), American novelist.
J. R. R. Tolkien (b. 1892), English writer, philologist, and university professor.
Ansel Adams (b. 1902), photographer.
Francis Collins (b. 1950), US physician-geneticist, discovered a number of disease genes and led the Human Genome Project.
Bode Miller (b. 1977), US alpine skier.
Felicia Day, (b. 1979), actress, writer, musician.
Erik Demaine, (b. 1981), mathematician, artist, MacArthur winner.
Reid W. Barton, (b. 1983), one of the most successful performers in the International Science Olympiads.
Tim Tebow (b. 1987), American football player, homeschooled, allowed to play in a local school’s football team.
Joey Logano (b. 1990), NASCAR Sprint Cup Series racer, the youngest driver ever to win a NASCAR race.

“It has been said that his teacher talked with his parents about Thomas not paying attention in class. The Edisons tried sending Thomas to different schools, but he still had problems learning. Mrs. Edison had been a schoolteacher. She knew that her son was smart. So she took Thomas out of school and from that time on, gave him lessons at home. Thomas Edison loved to read. When he was nine, his mother gave him a science book with experiments in it. Thomas set up his laboratory with chemicals, wires, and other things he needed.”

More recently, the Colfax Family, who wrote up their personal story in Homeschooling for Excellence is a fine example of a family who homeschooled their children at a time when it was not popular. To this day, they continue to witness the fruit of their labors. The Colfaxes homeschooled their four boys, three of whom were adopted (proving it wasn’t just ‘in the genes!’).

The Colfaxes kept their homeschooling rather simple — it focused on an intense love of learning, with plenty of room to allow their children to develop their talents at their own pace. Some of their children didn’t even learn to read until they were seven or eight years old, and they didn’t shuffle them to all kinds of lessons and activities. Their boys spent plenty of time working outdoors on their farm in creative ways and enjoyed drawing tons of knowledge from their incredibly large home library.

Although many of those mentioned here who were homeschooled may not be from Catholic families, their examples are inspiring from an academic and social standpoint.

As home educators we should feel honored to be following in their footsteps, expecting to be exceptionally successful, because we have the grace of God at our side.

Mary, Mother of the Church, pray for us!