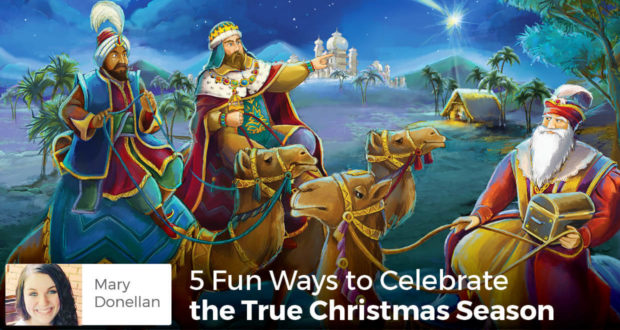 Isn’t it so discouraging the way the world pulls the plug (pun intended) on the celebration of Christmas, practically, from the first rays of dawn on December 26th?

The cheery Christmas lights evaporate into the bleak winter weather. The tree plummets out the window into a pitiful heap of half-dead fir. The radio returns to playing the same old tunes, though it had no scruples over wishing us a Merry Christmas before we’d eaten our Thanksgiving dressing. The downtown decorations melt into the puddles with all the Christmas snow. Christmas is discarded before it barely began.

What a frustrating and disappointing reality!

Our Holy Mother Church instructs us that Advent is a time of penance and preparation for the celebration of Christ’s birth . . . but is this four-week-long preparation directed towards only one day of celebration? We know better!

In our domestic church and in our homeschool, we know Christmas is one of the most joyous, holy, and delightful seasons of the entire liturgical year. Its rejoicing simply can’t be squeezed into twenty-four hours!

So, we’ve been given the eight-day Octave of Christmas, in which every day is as solemn and worthy of celebration of Christ’s Nativity as Christmas Day. Then we’re given the Christmas Season, which extends all the way to the feast of the Baptism of the Lord in January.

We also have the feasts of the Holy Family and Epiphany, with those of some of the Church’s most beloved saints, such as St. Stephen and the Holy Innocents . . . really, what’s not to love?

As Catholic homeschooling families, we have to go against the current of the culture, especially when it stands in direct contrast to an authentic and joyful participation in our Church’s holy liturgical year.

Inside and outside our homes, we must defend and delight in what has become a forgotten Christmas season. The King of the Universe deserves no less and desires no less for His faithful!

So, with this said, here are five especially fun ways you and your family can confuse the culture and thoroughly enjoy your Catholic Christmas season as it was always meant to be!

Party During the Octave of Christmas

Countless invitations fly out for Christmas parties in the early days of December. But what about a Christmas party that falls after Christmas Day—even on a random day in the first week of January? It’s rather a rarity, to say the least.

But throwing a Christmas party during the Octave of Christmas is also a beautiful way to acknowledge the Catholic Christmas season is still ongoing, and you’re rejoicing in the mystery of the Incarnation.

Make your favorite Christmas treats, keep the decorations up, and Bing Crosby crooning from the stereo; have everyone robustly join in the old Christmas hymns or even have a gift exchange!

But, most important, take a moment to read from Scripture or to offer the Angelus together. For The Word was made flesh, and dwelt among us.

The mystery of the Incarnation was what Advent prepared our souls and minds for and what Christmas calls us to celebrate with great joy! (And cleaning the house will help the kids put all that Christmas sugar intoxication to good use.)

Make a “12-Days-of-Christmas” tree and celebrate the symbolism

There are beautiful pre-made trees online, with customized symbolic ornaments, but you can easily make your own tree from felt, a tabletop artificial Christmas tree, or even your re-purposed Jesse Tree!

Make each ornament represent one of the twelve days, bearing the symbol from one of the verses.

While I think “The Twelve Days of Christmas” is a (musically) annoying song that I forbid any of my siblings from singing while we’re making Christmas cookies, it still can be interpreted to have rich Catholic symbolism . . . which makes it more bearable!

Admittedly, the actual history of the carol is mysterious, and some disagree about how religiously symbolic it was originally intended to be. It’s traditionally believed to be an old English Christmas carol, composed when the practice of Catholicism was persecuted and forced into the underground—and tradition counts for something.

But whether this tale is historically accurate, if you will be hearing this carol throughout the Christmas season, you might as well put it to good use and use it as a means of Christmas catechism!

The following interpretation is cited from Catholic Exchange:

“My true love” refers to God, “me” is the individual Catholic. The “twelve lords a leaping” are the twelve basic beliefs of the Catholic Church as outlined in the Apostles’ Creed. The “eleven pipers piping” are the eleven Apostles who remained faithful after the treachery of Judas. The “ten ladies dancing” are the Ten Commandments. The “nine drummers drumming” are the nine choirs of angels, which in those days of class distinction, were thought important. The “eight maids a milking” are the Eight Beatitudes. The “seven swans a swimming” are the Seven Sacraments. The “six geese a laying” are the Six Commandments of the Church or the six days of creation. The “five golden rings” are the first five books of the Old Testament, called the Torah, generally considered the most sacred and important of all the Old Testament. The “four calling birds” are the Four Gospels. The “three French hens” are the Three Persons in God or the three gifts of the Wise Men. The “two turtle doves” represent the two natures in Jesus: human and divine, or the two Testaments, Old and New. The “partridge” is the piece de resistance, Jesus himself, and the “pear tree” is the Cross.

Why not bring these symbols into your home as a special tradition during the Christmas season? Your “12 Days of Christmas” tree will catch eyes, start conversations, and be a special something the children look forward to each year . . . something uniquely Catholic and counter-cultural.

We all know what a relief it is to have the house finally decorated for Christmas.

It’s so calming to have the last few Christmas tree needles finally vacuumed up, the furniture dusted, the fir-scented candles lit, and everything sparkling, beautiful, and bright.

But doesn’t it miss the point to have our domestic churches fully decorated before Christmas, with nothing changing upon the actual Christmas season?

Granted, some families don’t decorate until Christmas Eve, and that’s special. And while that may not be practical for many of us, depending on schedules and stamina, it is still possible to take a leaf from their book

Why not save a few of our most special decorations for the actual Christmas season? For instance, my family decorates our home after Gaudete Sunday, but we keep all the decorative Christmas lights (including the Christmas tree) turned off until Christmas Day. (We do, however, light the star atop the tree, representing the Bethlehem Star, during Advent.)

Most of us, naturally, leave the Infant Jesus out of the Nativity scene until Christmas morning, but are there other beautiful decorations we could bring out only once Advent is past and the Christmas season has arrived?

Extra ornaments for the tree, extra lights, figurines—something special and noticeable that declares to all the family, We may have decorated early, but Christmas has only just now arrived—so we will commemorate and celebrate it with this!

Experiment and see how it contributes to a more authentically Catholic participation in the Christmas season in your home!

Also, you stand a better chance of surprising others, especially the lonely, when it’s after Christmas Day. What a beautiful tradition you can start with your family, one that’s a corporal work of mercy, a chance for musical education, and a witness to the true Christmas season!

Then, celebrate with a mug of hot chocolate once you return home. These traditions always require chocolate to be authentic.

Celebrate Epiphany with gifts and a house blessing

Epiphany is a wonderful and old Church feast worth celebrating in style in your domestic church!

There are many ways to rejoice in the arrival of the Magi (apart from moving them into the Nativity scene at long last!) and Christ’s threefold revelation of His divinity; baking a “three kings cake” (or a cake shaped like a crown), singing “We Three Kings” (of course), and having an annual house blessing in which you mark the lintels above your doors with blessed chalk, inscribing the year with the numerals separated by the initials of the Magi.

You can also hold back some of the gift-giving in your family for this feast day. What better way to celebrate the ongoing Christmas season than with gift-giving on more than one day?

There are many other ideas and options available for those who desire to make their Catholic Christmas season a time of holy joy.

But, no matter how you rejoice in the authentic Christmas season in your domestic church, your family will be blessed by your thoughtful efforts—and the world will be that much the better for having kept your Christmas in Christ and in His Church!

Merry Christmas to you and your families!