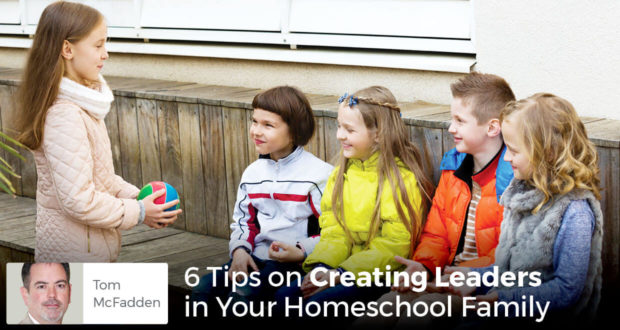 6 Tips on Creating Leaders in Your Homeschool Family

Are leaders born or are they made? Is homeschooling conducive to producing leaders? Tom McFadden says yes, and has six tips to greatly improve the chances.

Everyone talks about it.

Everyone’s trying to become one. It’s a big buzzword in today’s business world. But can leaders be formed in a homeschooling family? Is the environment conducive to producing leaders?

And an even bigger question: are leaders born or are they made?

First a little background on me. I grew up in a family of 6 and was the second eldest. I had low self-esteem issues, and weight problems (can anyone say “husky?”), and was the world’s biggest follower. I’m not sure I led anyone anywhere other than possibly some of my siblings or friends down the wrong path at times. I lacked self-confidence, and I spent my entire high school years getting into trouble because I was just “one of the pack.” I was not a leader.

After my college years, where, through a variety of circumstances, I was elected the Student Body President my senior year, I became a restaurant manager at a DC area all-you-can-eat seafood restaurant chain.

Later, I became a Director of Religious Education, then a primary school Headmaster. In my current position as Vice President for Enrollment at Christendom College, among other things, I manage the Director of Career & Leadership Development and help students understand how to best utilize their God-given gifts to strive for excellence and achieve success.

Since the fall of 1989, I have been in leadership positions, and, thanks to the grace of God, a great educational background, some great learning experiences, a decent gene pool, and the talents he gave me, I have been pretty successful. Over the years, I have come to believe that many people can become leaders, although, due to natural temperaments or characteristics, it comes easier to some than to others.

And I have also come to realize that all leaders do not have the same style of leadership – some are more outgoing, some are more reserved – but I certainly believe that leaders can be made, as happened in my case.

With all of that in mind, I wanted to offer some insights I have gained from my time going from a “one of the pack husky” to a successful Catholic business leader. I have also seen these tips played out in my own homeschooling family, as my wife and I try and raise faithful followers of Christ, while simultaneously producing the leaders who will help achieve God’s ultimate plan of victory in this world.

Humble people learn from their mistakes and are not too arrogant or haughty to ask for help from others. They are willing to take correction and put others first. If we see our children acting proud, conceited, or arrogant, it’s imperative to figure out a way to stress this most important virtue of humility.

And this can be difficult at an age where everyone wins a trophy, and A+ grades are given out like candy. It’s important for children to know their strengths and weaknesses, and have a truthful assessment of who they really are. I’ve never encountered a true leader who was not somewhat humble.

To be a leader, people must feel a bond with you and believe you to be truthful, honest, “a man of your word,” and someone who has “got their back.” They don’t have to like you, but they must respect you. Instilling this virtue in children can be difficult, but through perseverance, it is possible to help children “take ownership” for what they do and only put their best efforts forward.

Only by being honest with oneself can one hope to exude integrity and trustworthiness amongst one’s followers. And in a world where relativism reigns supreme, it may not always be easy to stick to one’s principles and live the truth. There are many enemies of both wisdom and truth, and keeping one’s integrity can rub people the wrong way.

Successful leaders know the truth and live it – no matter the consequences. Help your children to always tell the truth and to own up to their mistakes. It will help a lot later on.

To be able to communicate with people does not mean simply being able to express one’s ideas in an understandable manner. Rather, it means being able to read peoples’ body language, have empathy with them, and listen to their problems or new ideas.

Yes, it also means being able to write and speak properly, using the proper tone and words to convey what you want to say, so it is understood and received in that same manner.

Homeschoolers, from my experience, are generally very good at reading, writing, and comprehension. They can express themselves in the written word well. But are they ways to improve the other aspects of these skills? How about a game of Charades to understand non-verbal communication, or debate clubs to assist with oral communication?

In an age where young people are more and more only able to text or send pictures and walk around looking at their smartphones or feet, rather than looking up and acknowledging others, anything that you can do to improve these skills will be invaluable.

4. Understanding of the big picture.

Good leaders are intelligent and can think about many aspects of a problem before making decisions. Homeschooled students, like those enrolled in Seton Home Study, are getting an incredibly rigorous, well-balanced, and demanding education. They are learning diverse subjects and are held to high academic standards.

In short, they have the requisite knowledge, and with some further education in the liberal arts at a good Catholic college, they will gain the necessary life experience and further intellectual habit of mind to see the big picture and to make good sound decisions to benefit the team.

So many followers today are waiting for someone to show them a new way to do the same thing – a way to be innovative – and well-educated liberal arts graduates are often the ones leading the way.

It doesn’t matter how well you do once, or twice, or even a third time. What matters is how well you do over a long period. Even with the moral life, we can move forward or backward in spurts and fits, but what will end up getting us a place at the Banquet of the Lord will be perseverance in charity.

A leader does not give up. A leader learns from his mistakes and overcomes them. A leader does not see hurdles in his way and get discouraged – no, he either goes over them, around them, or under them to achieve his goal. A leader’s perseverance applies to his work ethic, his attitude, and his will.

So many give up at the first sign of stress or discomfort. A leader figures out how to achieve his goals, no matter what. Homeschooling students can learn this great virtue through always doing their chores, by being pushed to finish their curriculum promptly, by finishing tests and papers on time, and other such things. Without perseverance, you can never be a leader.

This is the hardest attribute to acquire because the only way to gain confidence, either in oneself or in one’s abilities, is through trial and error. I did not gain my self-confidence until I had tried and overcome many difficulties and trials, both personally and in the workforce.

Once I realized I had the ability to succeed, and do what I set my mind to and that several ideas worked out for the best, then I gained the confidence to continue to lead others. As a homeschooler, one can only gain a certain amount of confidence – in academics, in chores, in athletics.

However, not until someone has been around others, making good decisions that have achieved the desired results, can one gain the requisite confidence to be considered a true leader, in my opinion.

The bottom line is there is nothing about being homeschooled that would negate one’s ability from becoming a leader; in fact, I might say that it can actually greatly improve the chances.

I say this because there is a lot of self-direction and self-motivation required in homeschooling – more so than at a brick and mortar school. Through acquiring and practicing both natural and supernatural virtues, anyone can become a leader.

And through trial and error, and a lot of prayer and perseverance, anyone can become a great leader.

Tom McFadden holds a BA and MA in Theology and has worked at Christendom College since 2000, serving first as the Director of Admissions and most recently as the Vice President for Enrollment. He and his wife Amanda are the proud parents of eleven children.
communication skills confidence homeschool humilty integrity leaders mcfadden perseverance speaking properly successful leaders tom tom-mcfadden understanding 2017-01-28
Contributing Writers