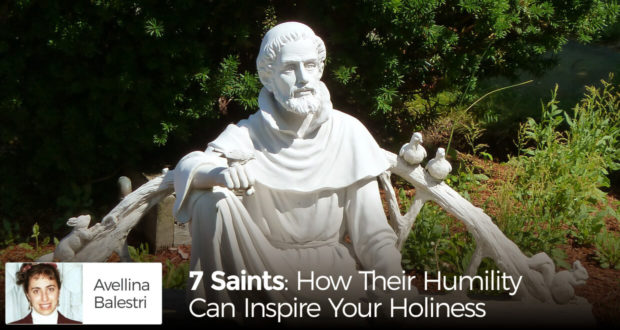 7 Saints: How Their Humility Can Inspire Your Holiness

The saints were not perfect, but they have the virtue of humility in common. Avellina Balestri shows how we can learn from their mistakes and virtues alike.

Humility is at the heart of holiness, and union with the divine is about loving all those in our path, not holding ourselves above them. Sanctimonious displays that cause us to step over and turn up our noses at people turn us in on ourselves and away from God. At the same time, thinking that we can fix all the problems of the world through our strength becomes self-serving aggrandizement, no matter how sincere our intent.

Humility is the only ground from which true love can spring. For humility is a giving up of self for something greater and enables us to see ourselves for what we truly are: created in the image of the divine, wounded through sin, yet transformed through love.

It seems that the closer the saints grew in their relationship with God, the more they could see their multitudinous imperfections, just as we can see floating particles of dust dancing within the light of a sunbeam. And the saints did have many flaws, sometimes colored by the time periods in which they lived, and sometimes more specifically dependent on their personality traits.

St. Francis of Assisi could be unrealistic in his strict adherence to total poverty, even when his order was expanding to the point of property ownership being a necessity.

St. Thomas More could use his biting wit to wound, swore like a Londoner, and could be harsh towards those with whom he disagreed.

St. Kateri, among other saints, inflicted extreme penances on herself, to the point of destroying her health.

St. John Vianney came out severely against almost any form of dancing and denounced the apparitions of Our Lady of La Salette, which were later approved by the Church.

St. Padre Pio and St. Maximilian Kolbe could be cantankerous and rude, causing some to have a hard time dealing with them.

Some of these failings the saints resolved in their lifetimes, while some others they probably took with them to their graves. But their belief in God’s mercy and grace enabled them to pick themselves up after falling, and continue to trek the Pilgrim’s Path.

St. Francis founded one of the most beloved religious orders in Christendom, grounded in the profound simplicity of the Gospels, that continues strong to this day.

St. Thomas More had the strength to stand up against tyranny to defend his faith at the cost of his life, setting an example for statesmen of integrity to this day.

St. Kateri braved innumerable hardships in her Mohawk village because of her conversion to Christianity and stands as the patroness of Native America.

St. John Vianney was tireless in his pastoral duties, and touched all those he met with his spiritual insight and humility.

St. Padre Pio had a deep mystical relationship with God, suffering the wounds of Christ in his body, and becoming the spiritual father of thousands.

St. Maximilian Kolbe founded the Immaculata and gave his life in exchange for another prisoner at the Nazi concentration camp at Auschwitz.

The Pitfall of Pride

In essence, the saints were extraordinary, but they remained flawed human beings, making them relatable in our daily struggles so that we might draw inspiration from their lives. They realized that even if they conquered all their vices and became flawless before God and man, they still might fall prey to the greatest sin of all: Pride.

St. Thomas More said that the one sin worse than lust is pride, because the former is obvious and animalistic, while the other is subtle and all too human. The thrill of ambition found in the game, the climb, the goal-meeting, even if for good causes, can too easily become idols replacing God as the center of our universe.

Eve, brought into being free from the stain of Original Sin, took the apple after being assured by the snake that she would be like a goddess, an ambition which could be replaced by any of our petty ambitions to raise ourselves high on pedestals.

The Blessed Virgin Mary, also conceived free from the stain of Original Sin, undid this fateful pattern by submitting herself with total humility as “the handmaid of the Lord,” and powerfully proclaiming that the Lord would “cast down the mighty from their thrones, and exalt the humble.” That is why we see her as “Queen of Saints”; she came into this world free from sin, was honored with bearing Christ in her womb, and yet did not succumb to thinking of herself as anything more than a servant of God, and as such became a Mother to all His people.

On the subject of pride and humility, there is one other saint that comes to mind in particular.

St. Edmund Campion was a brilliant man, seasoned in rhetoric and eager for debate. After living a life of daring and danger due to his conversion to Catholicism and his missionary ventures into England as a Catholic priest, he wanted nothing more than to meet his opponents on their terms and debate them. He challenged the Queen’s Councilors to this mental duel in his pamphlet now famously known as “Campion’s Brag,” insisting that a well-informed Catholic would be able to counter any and all heresies if given the fair opportunity to do so.

If anyone was fit to do so, it was Campion, whose wit was legendary in secular as well as religious circles. He had even won the favor of Queen Elizabeth I and her favorite, Robert Dudley, Earl of Leicester, in his college days.

But Campion never got his fair chance. Instead of being allowed an honest debate with the Protestant hierarchy of the land, he received a mock trial before a kangaroo court after he had been tortured mercilessly in the Tower of London. Half-paralyzed and bleary-eyed from his imprisonment, he was offered his “chance” to lay out his case on behalf of the Catholic Faith.

For sympathetic people, the scene would have been painful to watch. But the listeners merely jeered when Campion made a slip of the tongue in Greek and struggled to remember rhetoric when given no time for preparation. Considering the circumstances, he did a fair job holding his own, but his efforts cost him his life. There would be no justice; he was framed for treason and hanged, drawn, and quartered.

But perhaps it was meant to be that he should never get his chance to prove his brag. He had a scintillating brain, and it is always hard for highly intelligent people to keep their pride in check. Perhaps the fair debate he craved would have pushed him over the edge. Instead, he received a heavy dose of humiliation and perhaps that, more than almost anything, is the thing that secured him his sainthood. Being in the position of Christ before the Sanhedrin must have been like an interior martyrdom for him before he ever mounted the scaffold.

Saints are the humble ones who have gone before us. They are the veterans who have charged the blood-red field, planted the lily-white banner, and cheer us on to follow them to victory.

We can aspire to live out their virtues and learn from their vices, and work hard to live up to our Christian identity in every act of our lives, no matter how seemingly insignificant. It is not an easy life to lead, staying true to our Baptismal calling.

As St. Therese of Lisieux said, “I want to be a saint, but I feel so helpless.” It is a matter of giving all we have to purge our inner selves, working out our salvation day by day with fear and trembling, and trusting in God’s mercy to get us through to the end and hopefully to leave the world a better place for our presence in it.

As St. Catherine of Siena said, “Be who God meant you to be, and you will set the world on fire.”