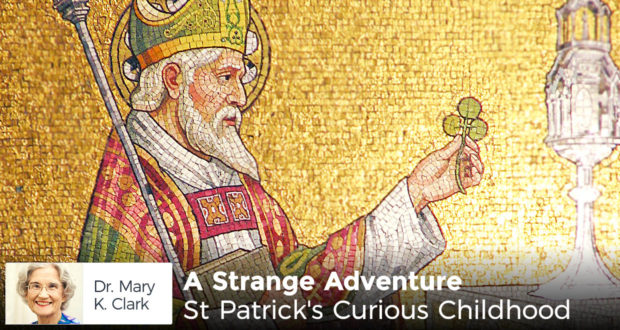 Though many people know of St. Patrick as the great bishop who drove the snakes from Ireland, very few know anything at all about St. Patrick’s early life, which is equally inspirational.

Patrick was born about 386 to a wealthy Roman family living in Britain when it was under the control of the Romans. Patrick’s father was a well-to-do Roman leader, a member of the senate, and a deacon in the Catholic Church. His grandfather was a Catholic priest.

As a young boy, Patrick was sent to a Catholic school. However, according to his Confessions, Patrick did not like school, and preferred to work on the family farm, to play games and participate in sports, and to go fishing and hunting.

Patrick’s family owned a spacious villa overlooking the sea on the outskirts of a town in Britain. When Rome withdrew its soldiers from Britain, the warlike Saxon pirates arrived in ships and raided several cities. During one of their raids near the villa, the pirates killed many people and captured thousands of young people, including Patrick.

At sixteen, Patrick was a great catch for the pirates, who sold him to a wealthy Irish family in need of a shepherd. Used to luxury, Patrick was suddenly forced to live the life of a slave.
While Patrick took care of the sheep, he spent much time praying, more than he ever had when living in his father’s comfortable home.

Now, he would say as many as one hundred prayers a day. Patrick also had quiet time to consider basic questions about his Catholic Faith, what life was really about, what was important to him. He reflected on what he had been taught by his father and his grandfather, and recalled what he had learned in his Catholic school.

Though a captive, he was determined to live the Catholic life he was taught, even fasting on holy days.

Years later, Bishop Patrick told the story about his escape from captivity. When Patrick was in his late twenties, after a day of prayer and fasting, he suddenly heard a voice telling him to escape his captivity. The following night, the voice told him “Your ship is ready.”

Believing the voice came from God, Patrick rose from his bed and began a two-hundred mile walk, being constantly directed by miraculous voices, which led him to a seaport on the east coast of Ireland. No one tried to stop him or question him, and in fact, strangers helped him along the way.

When Patrick reached the seaport, the captain and sailors for one of the ships gladly welcomed him. However, he soon was put to work as a slave on the ship, taking care of their cargo of dogs. Eventually, the ship lost its way, coming to an obscure island.

According to St. Patrick’s Confessions, when the food was gone and the sailors were desperate, the captain turned to Patrick and said, “O Christian, you say that your God is great and almighty. Then, can you not pray for us, for we are in danger of starvation?”

Patrick began praying for food, and suddenly, out of the island jungle appeared “a herd of swine.” All the sailors and dogs were saved by eating the pigs. The sailors thanked Patrick’s God. They had food and water in abundance for the rest of their trip. Finally, when they landed somewhere on the coast of France, Patrick escaped from the ship.

Patrick made his way to the city of Tours in France, to the monastery established there by St. Martin some years before. He spent the next four years living in this monastery, learning more about his Catholic Faith, and growing in the desire to return to Ireland to convert the Irish people.

He continually thought about the Irish people, many of whom, especially the children, he had come to love.

This true story of young St. Patrick, retold from his own Confessions, should encourage us homeschooling parents to understand that God can and does work in mysterious ways to save our children even amid the paganism of our day.

Young Patrick did not seem as concerned about his Faith while attending school, but when he was forced to survive in difficult days as a slave in a non-Christian society, the teachings of his father, his grandfather, and his Catholic school teachers, helped him to grow in his spiritual life.

The story of young St. Patrick can give us parents hope that while our children sometimes seem to think their sports and fun activities are more important, when the difficult days come later, their hearts and minds will turn back to the teachings of Jesus as we taught them in their youngest years.

The twenty-first century snakes of America are everywhere around us. Our responsibility is to give our children the Catholic Faith so that when the voice of God calls to them, they will follow Him into the battle.

With our prayers, even those who drift will return to what they were taught when they were young homeschooling students.