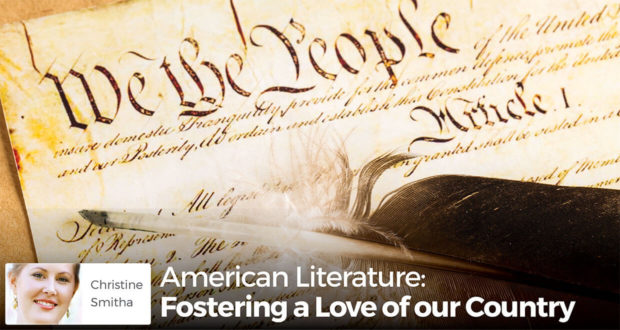 American Literature at Seton: Fostering a Love of our Country

You’ll be pressed to find Seton Home Study’s American Literature curriculum’s profound appreciation about being an American in your average American school.

Anti-Americanism is an all too familiar refrain these days, nowhere more rampant than in the textbooks and classrooms of the average American school.

But here at Seton, we’re not average. Though we recognize the problems that are all too real in today’s society, we also recognize that we are still a blessed nation in many respects, that there is much to be proud of and thankful for in America’s history, and that we have a duty to love and honor the country we call home.

A robust American heritage curriculum seeks to instill this love and honor in Seton students beginning in first grade with their first exposure to American history. It culminates in high school with a course in American Government, the students’ final course of American History, and an essential survey course in American Literature.

In some ways, it is this last course that may best accomplish our aim of developing thankfulness for our country because it is this course that most fully captures all that there is to appreciate about being an American.

One cannot complete Seton’s American Literature course without coming to understand the national character of the American people, marveling at the beauty of the country’s landscape, and honoring the founding principles upon which our nation was established and nurtured.

In today’s interest of celebrating diversity, the national character of the American people has lost focus. What we miss in the process is the identity forged by the fusion of these disparate cultures.

From its inception, the United States has been a conglomerate, but over time, its people have taken on the best characteristics of each tradition until a wholly unique and unmistakable disposition has been formed, recognizable anywhere and distinguishable from the character of any other nationality.

The national character has been fashioned by courageous, hard-working, and inventive people from around the world who have dared to start over in a foreign land. They have been industrious dreamers, for as Captain John Smith said, “What so truly suits with honor and honesty as the discovering things unknown, erecting towns, peopling countries, informing the ignorant, reforming things unjust, teaching virtue.”

They have been a God-fearing and religious people, as evidenced by the writings of the early Spanish settlers, the Pilgrim fathers, and the English Catholics of Maryland.

They have been a people self-sufficient, independent, and hard-working, in the words of the ‘American Farmer’ de Crevecoeur, “a people of cultivators…animated with the spirit of an industry which is unfettered and unrestrained, because each person works for himself.”

But while working for themselves, Americans have ever been generous and helpful toward others, as so often described in the memorable characters of American novels such as Shane, Tom Sawyer, and The Virginian. This is our heritage, and this is the blood that still runs in our veins.

Seldom is it the case that one country combines within itself such varied and beautiful landscapes as can be seen in the United States.

Yet here, in one land can be found mountains to rival the European Alps, coastline as beautiful as the fjords of Northern Europe, sandy beaches not unlike the famed Caribbean, wild desert lands akin to certain parts of Africa and Australia, forests deep as those of Germany, and vast plains such as are found in Canada and Russia.

America’s first author of renown, the much-admired Washington Irving, captured this well in The Sketch Book, where he catalogued America’s

“mighty lakes, like oceans of liquid silver; her mountains, with their bright aerial tints; her valleys, teeming with wild fertility; her tremendous cataracts, thundering in their solitudes; her boundless plains, waving with spontaneous verdure; her broad, deep rivers, rolling in solemn silence to the ocean; her trackless forests, where vegetation puts forth all its magnificence; her skies kindling with the magic of summer clouds and glorious sunshine—no, never need an American look beyond his own country for the sublime and beautiful of natural scenery.”

Is it any wonder that the world’s people still flock to this country to admire her land?

But Irving was not the only one to capture the wonder of America’s vast lands. The landscape of the United States figures as a character in its own right time and again throughout American literature, so that we come to love the land of the early settlers from James Fenimore Cooper’s writing, and the quiet loveliness of New England in Robert Frost’s poetry.

The high plains capture our imaginations in Willa Cather’s novels, and we cannot help being moved by her apt portrait of the American southwest in Death Comes for the Archbishop, where

“cloud formations seemed to be always there, however hot and blue the sky. Sometimes they were flat terraces, ledges of vapour; sometimes they were dome-shaped, or fantastic, like the tops of silvery pagodas, rising one above another, as if an oriental city lay directly behind the rock. The great tables of granite set down in an empty plain were inconceivable without their attendant clouds, which were a part of them, as the smoke is part of the censer, or the foam of the wave.”

The beauties of the American landscape have been immortalized in the words of America’s great authors, so that those with an ear to hear and an eye to see cannot help but love America a little better for having read her literature.

What of those famous principles upon which this country was founded? They are woven through America’s literature as the very glue that holds both it and this nation together.

From the writings of the explorers to the Declaration of Independence to the literature of the World Wars, we continually hear of dedication to duty, pursuit of honor, love for freedom, and belief in a Providence Who rewards a virtuous people.

Our very first president laid out America’s first principle of greatness, “Of all the dispositions and habits which lead to prosperity, religion and morality are indispensable supports.

In vain would that man claim the tribute of patriotism who should labor to subvert these great pillars of human happiness.” Along with the majority of our founding fathers, Washington recognized that a nation cannot hope to flourish without a commitment to faith and morals.

And in terms of morals, honorable discharge of duty and doing a job well have ever been close to the American heart. Ralph Waldo Emerson, our great essayist, stated that “God will not have His work made manifest by cowards. A man is relieved and gay when he has put his heart into his work and done his best; but what he has said and done otherwise shall give him no peace.”

This is a sentiment embodied in the life of George Washington Carver, for instance, and in the novels of Louisa May Alcott, and it inspired many men in wartime, who like Captain John Shea told their sons that it was their duty to be, “Defending our country, ideals, homes, and honor” so that their child might become “a great priest, a statesman, a doctor, a soldier, or a businessman.”

While such words can still be read and appreciated, this country is not completely without hope. American Literature has an important role to play in that hope.

May it be a source of inspiration for the future and for our ever-increasing commitment to love of country and love of freedom.

“For there’s a buried thing in all of us,
Deeper than all the noise of the parade,
The thing the haters never understand
And never will, the habit of the free.”
–Stephen Vincent Benet