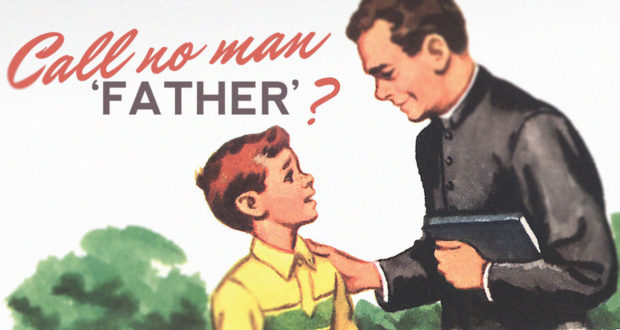 This is one of those “garden variety” objections to Catholicism that come up so often. Like many such contra-Catholic arguments, it seems to have a plausibility at first glance. But upon closer examination, the alleged difficulty vanishes.

As so often is the case, this “argument” hinges on an ignorance of different forms or genres of language in the Bible, and the importance of context. Critics of the Catholic Church frequently misunderstand both factors.

Matthew 23:9 And call no man your father on earth, for you have one Father, who is in heaven.

That seems straightforward enough, doesn’t it? How do Catholics get around this? Are we wantonly disregarding and disobeying a direct command of our Lord Jesus?

No, not at all. Jesus was simply using the common Hebrew teaching method of exaggeration or hyperbole. This is common in, for example, the book of Proverbs. Here are several other instances of the same sort of thing:

Matthew 18:9 And if your eye causes you to sin, pluck it out and throw it away; it is better for you to enter life with one eye than with two eyes to be thrown into the hell of fire.

Matthew 19:24 Again I tell you, it is easier for a camel to go through the eye of a needle than for a rich man to enter the kingdom of God.

Matthew 23:24 You blind guides, straining out a gnat and swallowing a camel!

Jesus was making the point that God the Father is the ultimate source of all authority. He said this during the course of rebuking the Pharisees for spiritual pride (Mt 23:2-10). Those who try to reason in this way neglect to see that it would prohibit all uses of the word father whatsoever; even biological fathers. Since that is an absurd outcome, it is clear that the statement cannot be taken in an absolute sense.

Such a sweeping prohibition clearly isn’t what Jesus had in mind, since He Himself uses the term father many times (thus was not even following His own command, if the criticism is correct):

Matthew 15:4 For God commanded, ‘Honor your father and your mother,’ and, ‘He who speaks evil of father or mother, let him surely die.’ [from the Ten Commandments]

John 8:56 Your father Abraham rejoiced that he was to see my day; he saw it and was glad.

St. Stephen, St. Paul, and St. James use the term father, too:

Acts 7:2 And Stephen said: “Brethren and fathers, hear me. The God of glory appeared to our father Abraham, . . .”

Romans 9:10 And not only so, but also when Rebecca had conceived children by one man, our forefather Isaac,

1 Corinthians 4:15 For though you have countless guides in Christ, you do not have many fathers. For I became your father in Christ Jesus through the gospel.

Philippians 2:22 But Timothy’s worth you know, how as a son with a father he has served with me in the gospel.

James 2:21 Was not Abraham our father justified by works, when he offered his son Isaac upon the altar?

It’s a standard rule in hermeneutics (the interpretation of Scripture) that we interpret less clear passages of the Bible in light of passages relatively more clear. This is a classic case. What seemed so simple at first is shown to be a more complex, hyperbolic saying that can’t possibly be taken literally, in light of the abundant related scriptural data.

Jesus could not contradict Himself, nor could His apostles blatantly disregard or be unfamiliar with His teaching (right in inspired Scripture!). Therefore, the objection to calling Catholic priests father must be discarded, as a thoroughly misguided “non-starter.”