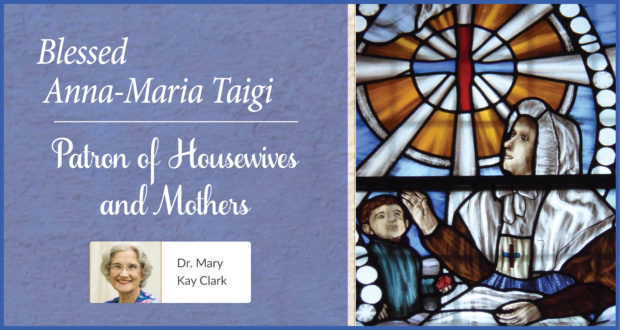 Blessed Anna-Maria trusted that God would provide what her family needed when they needed it. She is a model for us to not worry but to trust in God’s Will.

Blessed Anna-Maria Taigi was born in Siena, France, on May 29, 1769. When she was six years old, her very poor family moved to Rome. Anna-Maria received the sacraments of Baptism, Penance, and First Communion in France, and later received Confirmation in the church of St. John Lateran in Rome.

Anna-Maria attended a school in Rome only briefly due to a smallpox epidemic. Though she learned to read, she never learned to write. As a member of a very poor family, instead of continuing school, young Anna-Maria went to work in a shop, sewing clothes for the wealthy ladies of Rome.

She worked long hours at the sewing shop. After work, at home, she washed clothes and prepared the meals for her family until her parents returned from their jobs. However, nothing kept her from her daily prayers nor from her almost-daily Mass, and her Sunday Mass obligation.

When Anna-Maria was twenty years old, a twenty-eight-year-old Italian man asked her parents for her hand in marriage. It is believed that she married him because it was the usual thing to do.

The new family lived in a very poor home, where eventually Anna-Maria raised her six children, caring for them and for her husband, as well as continuing to work at her sewing job to help provide for the family. They lived as a very poor family in Rome.

One of the priests who knew her at that time said, “She was given to vanity and loved pretty clothes.” Her husband recorded that she liked to stand in front of her mirror, put flowers into her dark hair, and put a pearl necklace around her neck.

A Change of Heart

After her first baby was born, however, Anna-Maria suddenly had some thoughts and ideas which she could not understand. The thoughts seemed to be mystical experiences which made her think more about God. She suddenly felt disturbed about her lifestyle. She sought out priests to help her understand herself and her strange thoughts. Over time she changed her concern for her beauty, for her pretty clothes, for pretty jewelry, and for wearing clothes given to her by the wealthy ladies.

Anna-Maria finally found one priest, who later became a cardinal, who believed that Anna-Maria was experiencing messages from heaven. Since she could not write, the priest began writing down her words regarding her “messages.”

According to the documents presented to the papal experts who were considering giving Anna-Maria the Decree of Beatification after her death, the Blessed Virgin appeared to Anna-Maria several times with messages for those who wanted to follow Jesus.

In one of her visits, the Blessed Mother said the following:

“…you must be like My Son Jesus. You must be devoted above all to doing His Will and submitting your own constantly to His in the state of life to which it has pleased Him to call you; therein lies your special vocation….every individual must be able to convince himself that it is possible to serve God in all states and conditions of life without the performance of great exterior penances, provided only one fights vigorously against one’s passions and conforms oneself in all things to the Holy Will of God. Remember, it is far more meritorious to renounce one’s own will and submit oneself entirely to the Will of God, than to perform the greatest bodily mortifications.”

Soon people, especially the many ladies she knew from the sewing shop, would come to Anna-Maria Taigi for advice about their personal problems.

Blessed Anna-Maria can inspire us to gather our family members together for daily family prayers, and to follow the inspiration of Jesus and Mary every day.

Blessed Anna-Maria, pray for my family to dedicate our lives to following Jesus and Mary.

If you want to learn more about Blessed Anna Maria, Seton Educational Media sells a book about her messages from the Holy Mother of Jesus. Wife, Mother, & Mystic: Blessed Anna-Maria Taigi, by Albert Bessieres.