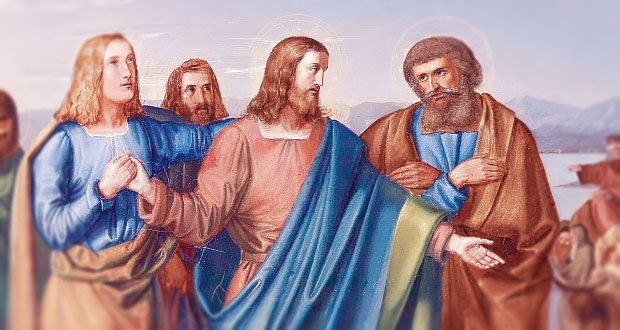 In my previous article, I wrote about the “Hebraic” use of the Greek adelphos: as applying to cousins, fellow countrymen, and a wide array of uses beyond the meaning of “sibling.” Yet it is unanimously translated as “brother” in the King James Version (KJV): 246 times. The cognate adelphe is translated 24 times only as “sister”. This is because it reflects Hebrew usage, translated into Greek. Briefly put, in Jesus’ Hebrew culture (and Middle Eastern culture even today), cousins were called “brothers”.

In all but two of these occurrences, the authors were either Luke or Paul. Luke was a Greek Gentile. Paul, though Jewish, was raised in the very cosmopolitan, culturally Greek town of Tarsus. But even so, both still clearly used adelphos many times with the meaning of non-sibling (Lk 10:29; Acts 3:17; 7:23-26; Rom 1:7, 13; 9:3; 1 Thess 1:4). They understood what all these words meant, yet they continued to use adelphos even in those instances that had a non-sibling application.

Strikingly, it looks like every time St. Paul uses adelphos (unless I missed one or two), he means it as something other than blood brother or sibling. He uses the word or related cognates no less than 138 times in this way. Yet we often hear about Galatians 1:19: “James the Lord’s brother.” 137 other times, Paul means non-sibling, yet amazingly enough, here he must mean sibling, because (so we are told) he uses the word adelphos? That doesn’t make any sense.

Some folks think it is a compelling argument that sungenis isn’t used to describe the brothers of Jesus. But they need to examine Mark 6:4 (RSV), where sungenis appears:

And Jesus said to them, “A prophet is not without honor, except in his own country, and among his own kin, and in his own house.” (cf. Jn 7:5: “For even his brothers did not believe in him”)

What is the context? Let’s look at the preceding verse, where the people in “his own country” (6:1) exclaimed:

“Is not this the carpenter, the son of Mary and brother of James and Joses and Judas and Simon, and are not his sisters here with us?” And they took offense at him.

It can plausibly be argued, then, that Jesus’ reference to kin (sungenis) refers (at least in part) back to this mention of His “brothers” and “sisters”: His relatives. Since we know that sungenis means cousins or more distant relatives, that would be an indication of the status of those called Jesus’ “brothers”.

What about Jude and James?

Jude is called the Lord’s “brother” in Matthew 13:55 and Mark 6:3. If this is the same Jude who wrote the epistle bearing that name (as many think), he calls himself “a servant of Jesus Christ and brother of James” (Jude 1:1). Now, suppose for a moment that he was Jesus’ blood brother. In that case, he refrains from referring to himself as the Lord’s own sibling (while we are told that such a phraseology occurs several times in the New Testament, referring to a sibling relationship) and chooses instead to identify himself as James‘ brother.

This is far too strange and implausible to believe. Moreover, James also refrains from calling himself Jesus’ brother, in his epistle (James 1:1: “servant of God and of the Lord Jesus Christ”): even though St. Paul calls him “the Lord’s brother” (Gal 1:19: dealt with above).

The alleged disproofs utterly fail in their purpose. The attempted linguistic argument against Mary’s perpetual virginity from the mere use of the word “brothers” in English translations (and from sungenis) falls flat at every turn, as we have seen.

If there is any purely “human” tradition here, then, it is the denial of the perpetual virginity of Mary, since it originated (mostly) some 1700 years after the initial apostolic deposit: just as all heresies are much later corruptions. The earliest Church fathers know of no such thing. To a person, they all testify that Mary was perpetually a virgin, and indeed, thought that this protected the doctrine of the Incarnation, as a miraculous birth from a mother who was a virgin before, during and after the birth.