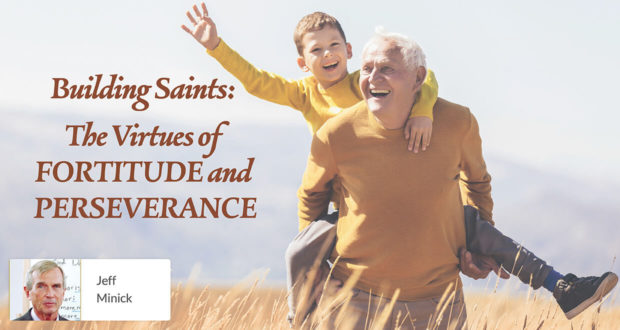 Building Saints: The Virtues of Fortitude and Perseverance

Great literature can instill in your children the virtues of fortitude and perseverance, helping them model saints and be faithful to Christ and His Church.

When Seton Marketing Director Jim Shanley suggested I write a series of articles on the virtues and character building, he mentioned that the conscious practice of the virtues acted like a tomato stake. A tomato plant left lying on the ground will likely rot and die, whereas that same plant tied to a stake will thrive and produce wholesome fruit.

A fine analogy, I thought, and one that is certainly apt in today’s culture.

I’m writing these words near the end of January, but they won’t appear in print for at least another month. At the moment, our country has endured close to a year of pandemic, months of unrest, and a messy presidential election.

I wish I could predict sunnier days ahead of us in March and April, but no matter what comes down the pike, we as home educators and Christians will still need those tomato stakes to keep us upright and growing in holiness.

In Character Building: A Guide for Parents and Teachers, David Isaacs examines twenty-four virtues and how parents and teachers may instill these values into young people. Two of these virtues especially pertinent to our own time are fortitude and perseverance.

Michael Walsh’s recent book of history, Last Stands: Why Men Fight When All Is Lost, which I have read and highly recommend, gives us a look at men who either died fighting their enemies when all hope was lost or else prevailed against overwhelming odds.

Thermopylae, the Alamo, and Grant at Shiloh are names familiar to most of us; the Jews fighting to the death against the Nazis in Warsaw, the French Foreign Legion charging into a mass of enemies at Camaron, or the Marines battling the Communist Chinese at the Chosin Reservoir may be unfamiliar. In all these conflicts, however, many soldiers fought desperately not only for their lives but for their fellow soldiers and, as Walsh tells us, for “their families, their property, and their way of life.”

In his accounts of these battles, and their causes and consequences, Walsh wonders time and again whether our culture is still capable of producing people who will rise to these challenges.

And though Walsh’s book addresses largely secular issues, we as Catholics can take lessons from these pages. We live in an age of cancel culture, a time when many Americans fear speaking out against wrong and injustice, rightly afraid of losing friends, family members, and even their livelihoods to a digital mob.

Yet we who are faithful to Christ and His Church must instill in our children the means and ways of fortitude, teaching them to stand fast, for example, when one of their university professors slams the faith or when a classmate belittles Christianity.

Like many of my readers, I struggle with the virtue of perseverance. Occasionally I practice it quite well. I have, for example, lived alone in my daughter’s house in Front Royal for eighteen months, mowing the lawn, taking care of minor maintenance problems, and seeing to the general well-being of the property. These tasks and my isolation mean persevering through times of loneliness and gloom.

On the other hand, I find myself wildly and humorously incapable of keeping most New Year’s resolutions and Lenten vows. Of the seven resolutions I made on December 31, I have already abandoned three and only indifferently practice two others.

Yet one of these resolutions I have maintained. Having become aware through conversations with friends that old books and I had parted ways, I vowed to read six such books this year. On the surface, that goal may not appear difficult, but I must add that I write a weekly book review column for the Smoky Mountain News, which generally means I must get through 45 books or more every year.

At any rate, I have just finished Sir Walter Scott’s Ivanhoe.

After becoming accustomed to the antique language and sentence cadences of this 200-year-old novel, I found myself enamored by this tale of knights and knaves, kings and commoners, and priests and monks. I discovered circumstances reminiscent of our own trials today: the arrogant Norman elites who despise and insult the conquered Saxons, the cultural clashes between these two groups, the distinction made between power-hungry ambition and worthy aspiration.

And like the Templar knight Brian de Bois-Guilbert, I fell in love with Rebecca, daughter of Isaac of York, a Jewish moneylender. Scott’s descriptions of her beauty, the tender scene when she cares for the wounded Ivanhoe, and her wisdom in dealing with friends and foes alike won my heart.

Most of all, however, it was Rebecca’s bravery and perseverance that attracted me. Despite Bois-Guilbert’s advances, Rebecca resists him.

Even when she is accused of practicing sorcery for her knowledge of medicine and for attracting the affections of a Templar, Rebecca persists in refusing Bois-Guilbert’s offers of salvation if she will only love him. Eventually, even that knight comes to admire her for taking this stand.

Rebecca provides an example of the strength and endurance we need today.

All of us, young and old, can benefit by following the examples of others: historical figures, fictional heroes and heroines, the saints and the apostles, friends, family members, and neighbors. My self-employed neighbor across the street, for instance, a young Catholic man with a sweet wife, two little girls, and another baby on the way, leaves the house before dawn nearly every workday morning and often returns home after dusk. He daily reminds me of the importance of duty
and work.

When we look to those worthy of our admiration, and when we try our best to practice the virtues and teach them to our children, we are following in the footsteps of those saintly men and women who are with God and who pray for us and listen to our own prayers.

Leon Bloy, French novelist, poet, and defender of the Church, once wrote, “The only real sadness, the only real failure, the only great tragedy in life, is not to become a saint.”

Fortitude and perseverance are two as key virtues in pursuing that sainthood.