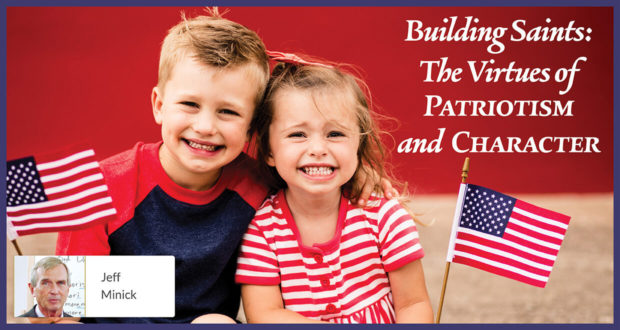 Building Saints: The Virtues of Patriotism and Character

If you are lucky, patriotism was inculcated in a childhood where you knew your neighbors, backyards, and small-town as well as your own household routine.

Am I missing something or has the word patriotism gone out of vogue these days?

We rarely hear of a public figure—a senator, a general or admiral, some private sector mogul—described as a great patriot, though certainly some of these people are devoted to their country. Many in our military also revere their country, and many of us who are civilians would call ourselves patriots as well.

Perhaps we have become shy about usage of this word because some people conflate patriotism with nationalism, yet the two are quite different in meaning. Derived from patria, Latin for country, patriotism implies a deep affection for our native land, for wishing to contribute to its common good, and for accepting certain obligations as its citizens.

On the other hand, nationalism, a phenomenon of the 19th century, is patriotism carried to an extreme, where we believe our country superior to others and act accordingly.

By now, some readers may be asking: “All well and good, but what does patriotism have to do with building saints?”

Love of Place, People, and Custom

In Character Building: A Guide for Parents and Teachers, Catholic author David Isaacs offers a course in the virtues, moral goods like patience, friendship, and modesty.

Isaacs devotes the final chapter of his book to “Patriotism,” lauding the piety we should show toward the place of our birth and nurture, and citing Saint Thomas Aquinas: “On the basis of birth and upbringing, parents and country are the closest sources of all our existence and development; as a consequence everyone is indebted first of all under God to his parents and fatherland.”

Patriotism for me, and I suspect for many of us, was inculcated in childhood by the place where I lived. Boonville, North Carolina was then a town of about 600 souls, and we children knew our neighbors, their backyards, and the small town itself as intimately as we knew our own household routines.

My elementary school teachers taught the history of America and North Carolina with affection for our country and state, and even the other kids I knew took pride in being Americans. “It’s a free country, isn’t it?” was a playground brag I heard many times growing up.

That little town forever captured my heart. We moved away before I entered high school, but when someone asks me, “So where are you from?” even today the first answer that pops to mind is Boonville. I loved that town, and love it still. It doubtless sounds sentimental and mawkish, but to this day, were it ever necessary, I would die defending Boonville, North Carolina.

That’s the essence of patriotism.

American history offers us millions of examples of men and women who were at the same time staunch Catholics and ardent patriots. Catholics, for instance, filled the ranks of the 69th New York Infantry Regiment, also known as “The Fighting Irish,” from the Civil War through World War I.

Some saints also qualify as patriots who dearly loved their homelands. Here Saint John Paul II comes immediately to mind, the priest who became supreme pontiff of the Church but never lost his attachment to Poland.

The best known of these patriot-saints is Joan of Arc. Mark Twain, who wrote a novel about Saint Joan, was fascinated by her and regarded her as one of the most amazing figures in human history. If we look at the story of her short life, we must surely agree with him.

Here was a teenage girl who, having heard voices and experienced visions, went to the king’s court to try and rouse the French to oppose the English during the Hundred Years War.

Here was a girl who today would be playing soccer in high school but who instead donned men’s clothing, who commanded soldiers in combat—she frequently chided them for their rough language—and who was ultimately martyred. Here was the girl whose example helped the French to throw off the English yoke and is today a patron saint of France.

Fighters for God and Country

Now let’s fast-forward 500 years to Nazi Germany and a band of anti-fascist students, the White Rose. Several members of this resistance group were devout Protestants and Catholics who loved their country and their religious faith, and abhorred Adolf Hitler and the Nazi party.

They resisted the Nazi dictatorship non-violently, printing and distributing leaflets calling for an end to the war and for a return to real German values. Several of them were arrested and martyred, others were imprisoned, and the group was eventually crushed.

In the film Sophie Scholl: The Final Days, which I highly recommend, we meet three participants in this underground band of freedom fighters: Sophie Scholl, her brother Hans, and their friend, Christoph Probst. In taking actions that will eventually cost them their lives, they display incredible courage and play the part of true patriots.

At one point in the film, her Nazi interrogator tells Sophie he would have brought her up differently than did her parents. She tells him of an incident reported to her by friends of her mother, of children with mental problems being taken away for execution.

She says, “Trucks came to pick up the children at the mental hospital. The other children asked where they were going. ‘They’re going to heaven,’ said the nurses. So the children got on the trucks singing. You think I wasn’t raised right, because I felt pity for them?”

In part for their love of country, in part because of their religious faith, Sophie, Hans, and Christoph fight against these dark forces of evil aiming to radically transform the world.

In his first book of essays, The Defendant, G.K. Chesterton wrote, “‘My country, right or wrong,’ is a thing that no patriot would think of saying. It’s like saying, ‘My mother, drunk or sober.’”

In that first sentence, Chesterton is correct. No true patriot would say, “My country, right or wrong.” But the comparison to motherhood doesn’t quite work. Just as we can love our mother, whatever her state of inebriation, so too can we love our country, even when its government makes mistakes or engages in wrong behavior. A government may represent the citizens of a country, but we must never mistake it for the country itself.

We see this distinction in the Ancient Roman practice of pietas, or piety, which included devotion to the gods, to the family and community, and to Rome. Governments came and went in the Roman Republic, but pietas remained.

Catholic patriots worldwide can practice this same pieta, and on those special days set aside to honor our particular flag and country, we should celebrate. American Independence Day (July 4th), Canada Day (July 1st), Philippine Independence Day (June 12th), Australia Day (January 26th), and the national holidays of all other countries: these are the times when we pause and think about the land and people we love.

Wherever we live, let us resolve to ask for God’s blessings on our nation, to strive for the common good, to regard our fellow citizens as brothers and sisters, and to try and preserve the customs, traditions, and virtues that bind us together.