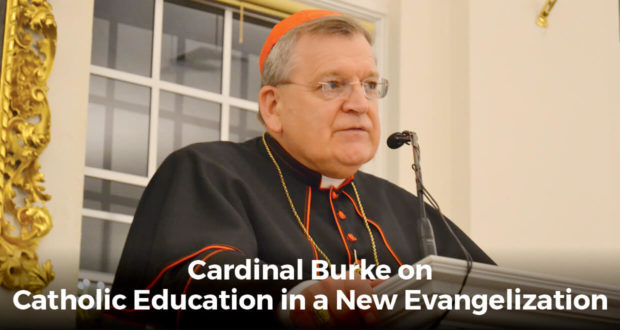 Cardinal Burke on Catholic Education in a New Evangelization

Cardinal Burke notes, “For the sake of our young people, we must give particular attention to the fundamental expression of our culture which is education.”

Excerpts from an address by Raymond Leo Cardinal Burke delivered at Northeast Catholic College’s Courage and Fidelity Dinner on April 4, 2016.

For the sake of our young people, we must give particular attention to the fundamental expression of our culture which is education.

Good parents and good citizens must be attentive to the curriculum which schools are following and to life in the schools, to assure that our children are being formed in the human and Christian virtues and are not being deformed by the error concerning the most fundamental truths of human life and of the family, which will lead to their slavery to sin and, therefore, profound unhappiness, and to the destruction of culture.

Today, for example, we sadly find the need to speak about “traditional marriage,” as if there were another kind of marriage. There is only one kind of marriage as God has given it to us at the Creation and as Christ has redeemed it by His saving Passion and Death.

At the heart of a solid curriculum is both respect for the dignity of the human person and for the tradition of beauty, truth and goodness in the arts and the sciences. Today, tolerance of ways of thinking and acting contrary to the moral law seems to be the interpretative key for many Christians.

According to this approach, one can no longer distinguish between the beautiful and the ugly, the true and the false, and the good and the evil.

We end up claiming to be Christian while tolerating ways of thinking and acting which are diametrically opposed to the moral law revealed to us in nature and in the Sacred Scriptures. [We become] so relativistic and subjective that we do not even observe the fundamental logical principle of non-contradiction, that a thing cannot both be and not be, in the same respect, at the same time. In other words, certain actions cannot at the same time be both true to the moral law and not true to it.

Charity alone must be the interpretative key of our thoughts and actions. In the context of charity, tolerance means unconditional love of the person involved in evil but firm abhorrence of the evil into which the person has fallen. All education should be directed to forming the students in the charity by which the mind and heart respond to the beautiful, the true, and the good, as God has created us to do.

At the heart of the deplorable cultural situation in which we find ourselves is the loss of a sense of nature and of conscience. Pope Benedict XVI addressed this, with respect to the foundations of law, in his address to the Bundestag during his Pastoral Visit to Germany in September of 2011.

Taking leave from the story of the young King Solomon on his accession to the throne, he recalled to political leaders the teaching of the Holy Scriptures regarding the work of politics. God asked King Solomon what request he wished to make as he began to rule God’s holy people. The Holy Father commented:

What will the young ruler ask for at this important moment? Success – wealth – long life – destruction of his enemies? He chooses none of these things. Instead, he asks for a listening heart so that he may govern God’s people, and discern between good and evil (cf. 1 Kg 3:9).

The Goal of Politics

The story of King Solomon, as Pope Benedict XVI observed, teaches what must be the end of political activity and, therefore, of government. He declared: “Politics must be a striving for justice, and hence it has to establish the fundamental preconditions for peace…. To serve right and to fight against the dominion of wrong is and remains the fundamental task of the politician.”

Pope Benedict XVI asked how we know the good and right which the political order and specifically the law are to safeguard and promote.

While he acknowledged that in many matters “the support of the majority can serve as a sufficient criterion,” he observed that such a principle is not sufficient “for the fundamental issues of law, in which the dignity of man and of humanity is at stake.”

Regarding the very foundations of the life of society, positive civil law must respect “nature and reason as the true sources of law.” In other words, one must have recourse to the natural moral law which God has inscribed upon every human heart.

Referring to a text of Saint Paul’s Letter to the Romans regarding the natural moral law and its primary witness, the conscience, Pope Benedict XVI declared: “Here we see the two fundamental concepts of nature and conscience, where conscience is nothing other than Solomon’s listening heart, reason that is open to the language of being.” Further illustrating the sources of law in nature and reason by making reference to the popular interest in ecology as a means of respecting nature, he observed:

Yet I would like to underline a point that seems to me to be neglected, today as in the past: there is also an ecology of man. Man too has a nature that he must respect and that he cannot manipulate at will. Man is not merely self-creating freedom. . .He is intellect and will, but he is also nature, and his will is rightly ordered if he respects nature, listens to it and accepts himself for who he is, as one who did not create himself. In this way, and in no other, is true human freedom fulfilled.

Reflecting upon European culture which developed “from the encounter between Jerusalem, Athens and Rome—from Israel’s faith in God, the philosophical reason of the Greeks and Roman legal thought,” he concluded: “In the awareness of man’s responsibility before God and in the acknowledgment of the inviolable dignity of every single human person, it [European culture] has established criteria of law: it is these criteria that we are called to defend at this moment in our history.”

While Pope Benedict XVI’s reflection is inspired by a concern for the state of law in the European culture, his conclusions regarding the foundations of law and, therefore, of order in society are clearly universal in application.

What Pope Benedict XVI observed regarding the foundations of law in the concepts of nature and conscience points to the fundamental work of education, namely, to develop in students “the listening heart” which strives to know the law of God and to respect it by development in the life of the virtues. The arts and sciences are most fully taught to students within the context of the divine order which they ponder and express.

As Christians, we must help society to recognize a certain order which permits the individual to pursue his own good, while at the same time respecting the good of others who form a community with him. The good is defined by the order found in the nature of persons and things, by which the same persons and things are directed to objective ends. In truth, the individual must understand that his own good cannot be served while the good of others and the order of creation are violated.

The individual cannot achieve his proper end—and, therefore, happiness—apart from respect for the proper end and ultimate happiness of his neighbor, and for the proper end of the things with which he interacts. Life in common is otherwise reduced to the tyranny of whatever group is able to prevail by winning the support of a majority.

Without the recognition of the common good, to which the individual good is essentially related and which it serves, society breaks down and is soon beset by the violence and destruction which are the inevitable fruits of unbridled individualism and self-pursuit.

In his Encyclical Letter Caritas in Veritate, Pope Benedict XVI takes up the question of the common good which, in his words, “is sought not for its own sake, but for the people who belong to the social community and who can only really and effectively pursue their good within it.”

Dedication to the common good, as Pope Benedict XVI makes clear, is an obligation imposed by both justice and charity. He concludes: “The more we strive to secure a common good corresponding to the real needs of our neighbors, the more effectively we love them.”

Education which takes place first in the home and is enriched and supplemented by truly Catholic schools is directed fundamentally to the formation of good citizens and good members of the Church. Ultimately it is directed to the happiness of the individual which is found in right relationships and has its fulfillment in eternal life.

It presupposes the objective nature of things to which the human heart is directed, if it is trained to be a “listening heart.” It seeks an ever deeper knowledge and love of the true, the good, and the beautiful. It forms the individual to this fundamental pursuit throughout his or her lifetime.

May God inspire and strengthen [all] in the work of forming “listening hearts” in the students who are the hope of our future.