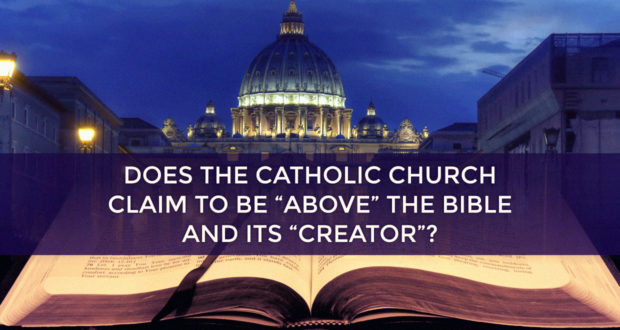 Does the Catholic Church Claim to be “Above” the Bible and Its “Creator”?

The Catholic Church assuredly does not claim any such thing; only that an authoritative Christian tradition and institutional Church was necessary to establish and proclaim the canon of Scripture. In many places, both directly and indirectly, Sacred Scripture teaches that it is inspired and infallible. What it doesn’t provide, however, is its own canon (list of books). Simply put: Scripture is what it is.

1 Tim 3:16 and other passages clearly teach inspiration. The Catholic Church merely acknowledges what is already (by its very nature) Scripture, or inspired revelation from God; it doesn’t make it so.

Sometimes it is claimed that this was something “new” in Vatican II. But the council echoed an earlier statement from Vatican I: which in turn was not far from similar expressions in the Council of Trent (1545-1563).

The Bible as Ultimate Authority?

The exact relationship of Scripture, Church, and tradition in Catholic thinking is commonly misunderstood; it is often referred to as the “three-legged stool” of Catholic authority. We believe in faith that the three don’t and won’t conflict. They are viewed as pieces of a whole. The Bible is central and primary in Catholicism as well, but not exclusively authoritative. It’s not isolated, nor can it even logically be so, because the Bible itself points to tradition and the Church as authoritative (see, e.g., the Jerusalem Council in Acts 15); it never teaches that it alone is the Christian’s sole ultimate authority.

Why, then, some people ask, do Catholics often act as if there would have been no Bible without the Catholic Church? They claim that this implies that we Catholics think our Church is above the Bible and superior to it.

The Protestant position (so they tell us) makes more sense because it places churches and traditions beneath Scripture. This seems obvious because the Bible is inspired and infallible, and men and traditions (which make up churches) are fallible and quite prone to error. So how can it be otherwise?

It doesn’t follow at all, however, that Catholics are placing Church above Scripture, in simply pointing out that human authority was needed in order to determine the canon. An analogy or comparison might be in order, to further explain this.

All agree that the Bible must be properly interpreted. Protestants, to their credit, place a huge emphasis on learning to study the Bible wisely and intelligently (the sciences of exegesis and hermeneutics). Just because learning and study are needed to correctly read the Bible and to attain to truth in theology, doesn’t mean that, therefore, the Bible did not already contain truth, or that human interpretation is “higher” than “God-breathed” biblical inspiration.

Likewise, it was necessary for human church councils to decide on the specific books that were to be included in the biblical canon. This doesn’t imply in the least that the councils (let alone the Church) are “above” Scripture, any more than a Christian communion authoritatively declaring in its creed that Jesus is God in the flesh, makes them “higher” than He is, or superior.

Proclamation of an existing reality has nothing to do with some supposed “superiority” of category. Both the Bible and theological truth remain what they are at all times. But God is able to (and indeed does) protect human beings from error insofar as they make binding claims about the biblical canon. Catholics believe that God (the Holy Spirit: John 14-16) willed to protect the Catholic Church from error, and that He is certainly capable of doing so, because He can do anything.

In conclusion, here are the Catholic magisterial documents having to do with this question:

These the Church holds to be sacred and canonical; not because, having been carefully composed by mere human industry, they were afterward approved by her authority; not because they contain revelation, with no admixture of error; but because, having been written by the inspiration of the Holy Ghost, they have God for their author, and have been delivered as such to the Church herself.

The divinely-revealed realities which are contained and presented in the text of sacred Scripture, have been written down under the inspiration of the Holy Spirit. For Holy Mother Church relying on the faith of the apostolic age, accepts as sacred and canonical the books of the Old and New Testaments, whole and entire, with all their parts, on the grounds that they were written under the inspiration of the Holy Spirit (cf. Jn. 20:31; 2 Tim. 3:16; 2 Pet. 1:19-21; 3:15-16), they have God as their author, and have been handed on as such to the Church herself.