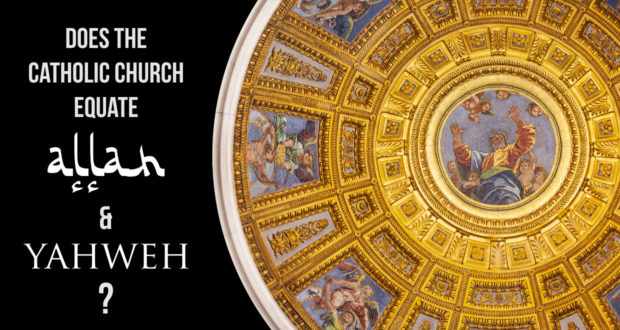 Does the Catholic Church Equate Allah and Yahweh (God)?

Editor’s Note: The following article is theologically speculative, and does not necessarily reflect the views of Seton Home Study School. We understand that other interpretations are possible, and invite you to comment. In this, as in all matters, we submit to the authoritative judgment of the Holy See.

Lately this issue has come up again, after Pope Francis met with Muslim leaders. If I had a dime for every time I heard folks expressing alarm and getting worked up about this issue, after ecumenical or diplomatic Catholic-Muslim events occur, I’d be a rich man.

Rest assured, the concern reflected in my rhetorical title is based on a great misunderstanding.

When the Church has referred to Muslims worshiping the one God, it is meant in the sense of both Christians and Muslims being monotheists. Monotheism includes Christians, Jews, Muslims, and more vague “philosophical theists” (for example, heretical, anti-trinitarian sects like Jehovah’s Witnesses, with their Arian God, and belief in a created, non-divine Jesus).

They [Muslims] worship God, who is one, living and subsistent, merciful and almighty, the Creator of heaven and earth.

If you read closely, the council isn’t saying that “the Muslim God [Allah] and the Christian God are exactly the same.”

Rather, the common bond is monotheism. Indeed, the document could not possibly be equating Allah and Yahweh, because we Catholics believe God is a Trinity (One God in Three Persons), and Muslims (and Jews) do not.

Vatican II was using “diplomatic language” in its ecumenical statements. It’s an instance where the context of the statement is supremely important in determining the exact meaning intended.

Moreover, one must distinguish between the two notions:

1) A Muslim worshiping the One he believes to be the true God.

2) The recipient of God-directed worship, even if erroneous in some respects, being the God Who Really Is, since Allah does not exist.

As an analogy, imagine a child who was adopted but didn’t yet know it. He or she might say, “I am really thankful that my mother gave me birth.” Now, this person thinks that his or her birth mother is the woman who in reality is the adoptive mother. But nevertheless, the attitude of thankfulness for having been given birth in a sense “transfers” over to the actual birth mother.

In other words, it has to be the birth mother who is truly receiving praise because the person giving it intends it for that person who gave him birth: and that person is who she is whether the child knows this or not. The fact that there is a mistake concerning the actual person regarded as the birth mother does not change the factuality of it.

Likewise, a committed Muslim is worshiping what he sincerely believes to be God. He is mistaken, of course, as to the actual definition and ontological reality, but he is worshiping in common with Christians, insofar as he is also a monotheist.

He is worshiping, for example, the Creator insofar as he understands Who the Creator is. And Yahweh is receiving that praise in reality because He is the true Creator. In that sense the Muslim is indeed worshiping God, but since Allah doesn’t exist, he is really (at bottom) worshiping Yahweh, in relative ignorance.

I believe that God (that is, Yahweh!) takes this into account, and the person gets some credit for what he does know and Who he wants to worship, even though he is mistaken in his theology.

The point is that words have to be read in context and in accordance with an overall worldview. As I have argued many times when this issue comes up: no one seriously maintains that the Catholic Church has stopped believing in the Trinity. Therefore, when the Church says that Muslims and Jews worship the one God, it cannot possibly mean that “Muslims and Jews are trinitarian.”

Therefore, it must mean that “Muslims and Jews are also monotheists, as we are, and worship the one God.” Context (and the writer’s purpose) are supremely important. Many people isolate texts and wrongly assume things.

It sounds a lot better and is infinitely more positive in nature to say:

“Catholics and Muslims both worship the one God of Abraham,” etc.

That would rather defeat the ecumenical, diplomatic purpose, wouldn’t it? That purpose is precisely to find things in common (monotheism being one of these). The language is necessarily different, because the purpose and goals are different.

It is good to do apologetics and defend what one believes to be the truth (I’ve devoted my life and profession to that), and also to build bridges and rejoice in actual common ground (ecumenism), in order to foster peace and better mutual understanding.

The Catholic Church holds that both are good and worthwhile endeavors, and that they are in harmony with each other.