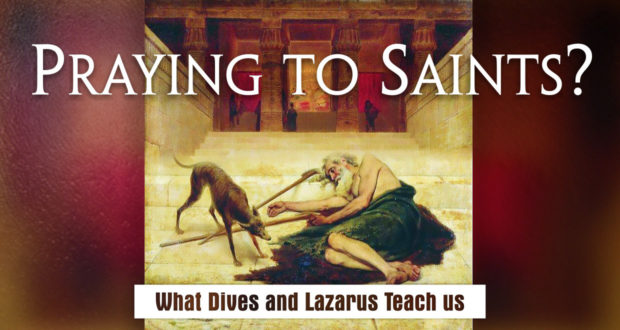 Christ Teaches that Saints can Intercede for Us… Right?

Have you ever talked to anyone who exclaimed: “The Bible never shows anyone praying to anyone other than God! And we can never communicate to anyone who is dead, either; that’s occultic!”

Yet it’s indisputable that Jesus indeed plainly teaches the very thing that they claim is nonexistent in Scripture. In His story of Lazarus and the rich man (Luke 16:19-31), we find our compelling prooftext:

Luke 16:24 (RSV) And he called out, ‘Father Abraham, have mercy upon me, and send Laz’arus to dip the end of his finger in water and cool my tongue; for I am in anguish in this flame.’

His request is again declined (16:29). He argues with Abraham (16:30), but Abraham reiterates that what he asks is futile (16:31). All of this reveals to us that not only can dead saints hear our requests; they also have some measure of power to carry them out on their own (though no doubt by God’s power). Abraham is asked to “send” a dead man to appear to the rich man’s brothers, in order for them to avoid damnation.

Abraham doesn’t deny that he is able to potentially send Lazarus to do such a thing; he only denies that it would work (by the logic of “if they don’t respond to greater factor x, nor will they respond to lesser factor y”). Therefore, it is assumed in the story that Abraham had the ability and authority to do so on his own. And this is all taught, remember, by our Lord Jesus.

The fact that Dives is dead (in the story they are both in Hades or Sheol: the intermediate netherworld) is irrelevant to the argument at hand, since standard Protestant theology holds that no one should make such a request to anyone but God. He’s asking Abraham to send Lazarus to him, and then to his brothers, so that they can avoid his own fate.

That is very much a prayer: asking for supernatural aid from those who have left the earthly life and attained a greater perfection. Also, rather strikingly (and disturbingly for Protestant theology), God is never mentioned in the entire story of Lazarus and the rich man. It’s all about Dives asking / praying to Abraham for two different requests.

Protestant theology also generally teaches that we can’t talk to anyone who is dead, let alone make intercessory requests to them. Yet King Saul talked to the dead prophet Samuel (1 Sam 28:12-15), Moses and Elijah appeared at the Mount of Transfiguration (Mt 17:1-3), the “Two Witnesses” of Revelation (11:3-13) came back to life again (and talked to folks); so did those who rose after Jesus’ Resurrection (Mt 27:50-53), etc.

One reply (that I myself just heard from two people) is to maintain that “this is only a parable” – therefore we are told that it doesn’t “prove” anything. But many Bible commentators agree that it’s not a parable. Parables don’t use proper names: let alone that of a familiar historical figure like Abraham.

They’re also prefaced by a statement (usually by the Bible writer, not Jesus) that the words following are to be considered a “parable.” Nor do I recall any other parables referring to Hades. They are in almost all instances quite “earthy” illustrations: often using agricultural and master / servant word pictures.

But even if we grant for the sake of argument that it is a parable, the difficulties for Protestants are not overcome at all, since even parables cannot contain things that are theologically false, lest Jesus be guilty of leading people into heresy by means of untrue illustrations or analogies.

In fact, my contention would be even stronger if it is a parable, for in a non-parable, a person could do or say something theologically incorrect. But in a parable taught by an omniscient Jesus, Who is God, in an inspired, infallible revelation, falsehood could not be “enshrined.”

What Jesus is teaching His hearers cannot contain theological error, and arguments by analogy (basically what the parables are) cannot contain false principles.

We conclude, then, that Jesus sanctioned “prayer to” dead men for requests. That is the traditional notion of “communion of saints.”