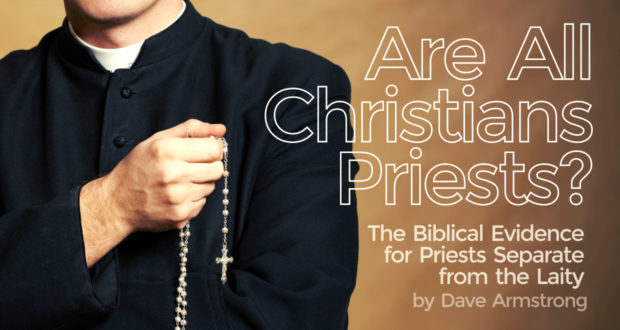 Are All Christians Priests? The Biblical Evidence for Priests Separate from the Laity

Our Protestant friends (particularly evangelicals) sometimes claim that all Christians are priests, and that there is no special class set apart from others in the Church.

I submit, however (and hope to show below) that the Bible teaches about clergy, who are set apart from lay members of the Church. It also gives indication of priestly function.

The priesthood as we know it today is not a strong motif in the New Testament. But this can be explained in terms of development of doctrine: some things were understood only in very basic or skeletal terms in the early days of Christianity. This is even true of doctrines accepted by all, such as the Holy Trinity or original sin.

The canon of the biblical books was slow to formulate (four centuries). Also, it has been argued that priesthood was a subdued feature of primitive Christianity because it had not yet finally separated from Judaism; therefore, the authority of Jewish priests was still accepted. Acts 2:46 (RSV) describes the Jerusalem Christians as “day by day, attending the temple together and breaking bread in their homes.”

The Apostle Paul was presenting offerings in the temple around the year 58 (Acts 21:26), acknowledged the authority of the Jewish high priest, described himself as a Pharisee (Acts 23:5-6), and observed Jewish feasts (Acts 20:6).

That said, one can still find much evidence in the Bible of a Christian priesthood. Jesus entrusts to His disciples a remembrance of the central aspect of the liturgy or Mass (consecration of the bread and wine) at the Last Supper (Lk 22:19: “Do this in remembrance of me”). Paul may also have presided over a Eucharist (Acts 20:11: “Paul had gone up and had broken bread and eaten”).

These same disciples were (like priests) models of a life wholly devoted to God, as a matter of lifelong calling. Jesus had chosen and “appointed” them, and they had become His “friends” (Jn 15:15-16). He was their sole master (Mt 6:24). There was no turning back in their ministry (Lk 9:62), and they were called to a radical commitment involving even leaving possessions and their entire families:

The priest-disciple must accept hardships and privations and embrace self-denial:

Celibacy, for the sake of undistracted devotion to the Lord, is commended, provided that someone is called to it:

Protestants sometimes cite 1 Peter 2:5, 9 to the effect that all Christians are priests. But Peter was citing Exodus 19:6: “you shall be to me a kingdom of priests and a holy nation.” The problem with this is that the older passage couldn’t possibly have meant that there was no priesthood among the ancient Hebrews, since they clearly had a separate class of priests (Leviticus: chapters 4-7, 13-14).

This is even seen in the same chapter, since Exodus 19:21-24 twice contrasts “priests” and “people.” Thus, it makes much more sense to interpret 1 Peter 2:5 as meaning a separate, holy, “chosen” class of priests. But the notion of “spiritual sacrifices” (faith, praise, giving to others) does apply to all Christians (Phil 2:17; Heb 13:15-16).