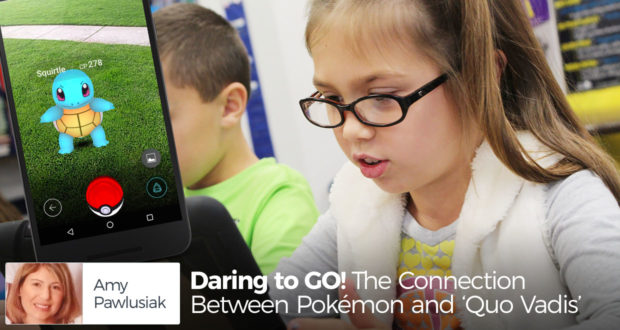 Daring to GO! The Connection Between Pokémon and ‘Quo Vadis’

People wandering about playing Pokémon GO has Amy Pawlusiak, mother of five, asking why it takes an app to tell us to “Go”. So, where are you going?

I see people walking aimlessly (seemingly) around the neighborhood, the mall, and many other places, looking down at their phones. During Mass one day, I even saw someone walk by the windows through the bushes outside the church. All the congregation was wondering, “Where is that person going?”

The priest joked that as long as people were respectful and didn’t interfere with the church services, they could wander around the grounds, looking for “Pokémon” to add to their collections.

I don’t know much about Pokémon, and if you’re like me, maybe you’re too busy to stop and explore it. This little incident made me think about a similar situation with our Faith as Catholics. Wouldn’t it be nice to have an app for each of our faith lives, telling us where to ‘GO’ to?

We met people only by going somewhere, such as church, school, the library, etc. We liked going to new places and meeting new people or old friends.

Now it seems we just stay home as much as we can. We post online about our daily happenings instead of calling or meeting our friends. We order all of our purchases online instead of going to the store. When people do invite us to events, we make excuses about why we can’t go. For some reason, we just don’t want to get up and go for anything.

When we do actually go, it’s because of the kids’ activities or work. When we see friends by chance at the grocery store, it’s only to say, “I’ve been so busy! Let’s get together soon!” The words fall flat, and we often don’t really mean them.

They express a hope that we may sometime soon feel less stressed and rushed.

When did we have so little time and seemingly so much more to do? The only places we go are the ones we must go to. Otherwise, going is just too much work. We’d rather stay home.
All of our technology only seems to add to our to-do lists.

We must now check the emails, the posts, the texts, and the voice mails. We can’t stop, or we might be left out or miss something important. The technology stresses us out, but at least we can do most of it from home or while we are waiting for our kids to finish practice.

And then here comes this new app, making people break out of their comfort zones and “GO” everywhere!

It’s funny that it takes an app to make people do what we used to do all the time. Now people are going wherever this thing tells them. They are even meeting other people for Pokémon “battles.”
And to those of us who don’t know what’s going on, they seem to be walking around aimlessly and loving it. It’s all part of the fun.

Surprise, surprise. Going somewhere these days can be fun?

It takes a little more than a cutesy Pokémon to get me out of my comfort zone. Maybe it’s because I haven’t given the game a try yet, but I know that I have so much to do already.

This concept of getting up and just going fascinates me because it reminds me of the key scene in the novel, Quo Vadis, by Henryk Sienkiewicz, which means “Where are you going?” in Latin. In this scene, Peter is leaving Rome at the earnest request of his followers because of Nero’s desire to kill all the Christians. But he meets Christ along the way. The scene goes like this:

“Peter (on the road leaving Rome) then threw himself on his knees, his arms stretched forward; and this cry left his lips, “O Christ! O Christ!”

He fell with his face to the earth, as if kissing someone’s feet. The silence continued long; then were heard the words of the aged man, broken by sobs, “Quo vadis, Domine?”

“If thou desert my people, I am going to Rome to be crucified a second time” (said Christ). The Apostle lay on the ground, his face in the dust, without motion or speech. It seemed to Nazarius that he had fainted or was dead; but he rose at last, seized the staff with trembling hands, and turned without a word toward the seven hills of the city. The boy, seeing this, repeated as an echo, “Quo vadis, Domine?”

“To Rome,” said the Apostle, in a low voice. And he returned.”

Where Are You Going?

Peter thought he was going so he could stay alive and continue his work, or rather Christ’s work. But he neglected to ask Christ if this was His will. Christ then made it clear what he wanted Peter to do.

As I watch people hunting Mewtos and Pikachus in the neighborhoods and parks with their heads down, staring at their screens, I admire their willingness to drop everything and go.

I want to be able to get up and go places with my life too, but it’s not as easy when I don’t have an ‘app‘ that tells me where I need to be. How can I go when I don’t know the destination? Maybe I’m too tired, too busy, or too afraid to ask Christ myself and hear His answer. As with Peter, He might ask me to go somewhere I don’t want to.

But I need to ask, because He needs to remind me of my eternal destination. And each place He asks us to go is on the road toward Himself. We need to realize that our sights are set on greater goals than just taking a child to school, to practice, or to church. My goal is reaching Heaven one day.

This day’s comings and goings constitute just one of many days that all lead up to that BIG day. The day I go home. Peter knew where he was going, and stayed on track even when the journey was hard.

And we don’t need a game or an app to tell us exactly where to go, nor are we wandering aimlessly. We have Christ to actually tell us. We just need to listen, and have the courage to get up and move.

And on the way out the door, ask Christ, “Quo vadis, Domine?”.