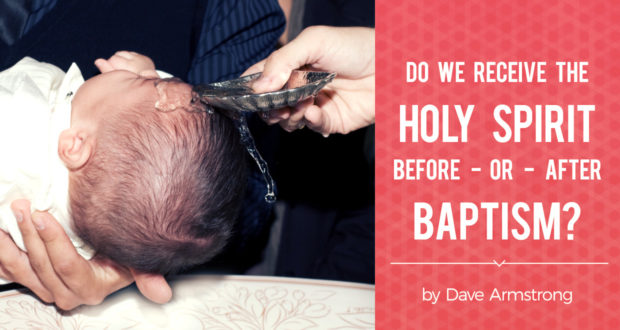 Do We Receive the Holy Spirit Before or After Baptism?

In defending Catholicism during the course of friendly discussions with Protestant brethren in Christ, I come across new arguments and ways of seeing things, as a result of challenges. Recently, it happened again, in a discussion with a Baptist pastor, originally concerning infant baptism.

The most interesting part of our dialogue, however, had to do with baptismal regeneration. My pastor friend argued that in the case of both Acts 16:15 and 16:33, context indicated faith before the baptism occurred. I quickly conceded this point, but noted:

For the adult believer, such faith will precede baptism. In the Catholic Church, those being received who have never been baptized, make a profession of faith before they receive the sacrament: not unlike the Baptist “believer’s baptism.” But this doesn’t exclude infants also receiving baptism.

He brought up the classic Protestant “gospel” verse of John 3:16 and said that it was odd that baptism wasn’t mentioned in it, if indeed it were so crucial to salvation. I countered that with Mark 16:16 (“He who believes and is baptized will be saved”).

Moreover, St. Peter, in preaching the gospel in the first Christian sermon in Acts 2, on the Day of Pentecost; included baptism in his entire proclamation: “Repent, and be baptized every one of you in the name of Jesus Christ for the forgiveness of your sins” (Acts 2:38). Romans 6:3-6 directly connects baptism and reconciliation with Christ as well. Galatians 3:27 teaches us that the baptized have “put on Christ.”

Baptism brings about regeneration as the agent or means. It’s not merely a symbolic act after regeneration has occurred: “. . . for the forgiveness . . .” Peter makes the idea of salvation through baptism even more clear in 1 Peter 3:18-21. The Ethiopian eunuch in Acts 8 also is baptized as soon as he fully accepts the gospel.

For Baptists and many kinds of Protestants, one is actually saved before being baptized; then (symbolic) baptism (for adults) occurs after, as an act of obedience and thanks.

Let’s examine this. The first thing St. Paul did upon his spectacular conversion was be baptized. What did this baptism do? Here is his own account of Ananias’ words to him:

It would require an unnatural, non-contextual attempt to separate the “wash[ing]” here from baptism. This is clearly baptismal regeneration: expressly taught by the apostle Paul. My pastor friend noted that belief preceded baptism in this account and others, because in Baptist theology a person must always be consciously aware of what baptism means. Yet Baptists deny baptismal regeneration.

Yet we can also make a further chronological distinction of repentance and belief, then baptism, then received forgiveness of sins and salvation (regeneration). That was the order in Acts 2:38-39:

A person (beyond the age of reason) must repent to be saved (we fully agree with Baptists about that), but surely if they have not yet received forgiveness of sins (reconciliation) or the Holy Spirit (Whom all Christian believers possess), they are not yet a Christian abiding in God’s grace as His friend and child. And this is the order of things that we find in Acts 2:38-39, as noted above.

It’s the same with the Apostle Paul in Acts 22:16. He is baptized, and then his sins are washed away: which has to take place in order for him to be saved in the present sense and tense of the word (as Catholics would put it: in good graces with God and absent of mortal sin), and regenerated. These two instances directly contradict the Baptist schema and outlook of how regeneration takes place.

The Baptist claims that forgiveness of sins / reconciliation and receiving the Holy Spirit and regeneration precede baptism in an adult. But in these two fairly clear scriptural examples, it is the opposite. Those things follow and are directly caused by baptism, as a sacrament.

I submit with all due respect that these are plain examples where Catholic teaching is entirely in accord with the Bible, whereas Protestant theology (in this case, the Baptist version) directly clashes with it.

Most Protestants believe as they do in good faith and with the right intentions. It’s simply a matter of becoming acquainted with the far more deeply biblical thinking of Catholic tradition. This is our task: to share with all and sundry, the riches we have graciously received as Catholics.