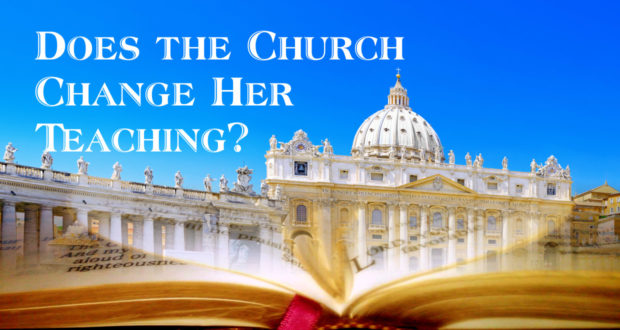 Does the Church Change her Teaching?

The positive historical statements made by Christianity have the power . . . of receiving, without intrinsic change, the increasing complexity of meaning which increasing knowledge puts into them.

The Catholic Church, in agreement with Lewis, defines doctrinal development as a growth of depth and clarity in the understanding of the truths of divine revelation.

It is important to understand that the substantial or essential truths at the core of each doctrine remain unchanged. Only the subjective grasp of men increases.

This increase is the result of the prayerful reflection of the Church, theological study and research (often occasioned by heretical challenges), practical experience and the collective wisdom of the Church’s bishops and popes, especially when joined in ecumenical councils.

Development (often described as an “acorn to oak tree” process) is pictured in the following biblical passage:

Matthew 13:31-32 . . . “The kingdom of heaven is like a grain of mustard seed which a man took and sowed in his field; [32] it is the smallest of all seeds, but when it has grown it is the greatest of shrubs and becomes a tree, so that the birds of the air come and make nests in its branches.”

Seeds and Bodies Grow and Expand

Doctrine clearly develops within Scripture (what is also called “progressive revelation”). Examples of this process include the doctrines of the afterlife, the Trinity, the Messiah (eventually revealed as God the Son), the Holy Spirit (a Divine Person in the New Testament), the inclusion of Gentiles, bodily resurrection, and the sacrifice of lambs as a type and shadow of the sacrifice of Christ. Not a single doctrine initially emerges in the Bible complete with no further need of development.

The canon of Scripture itself is an example of developing doctrine (and a Church tradition). The New Testament never informs us which books belong to it, and its list of books took about 360 years to reach its definitive form (at the Council of Carthage in AD 397).

For instance, the books of Hebrews, James, 2 Peter, 2 and 3 John, Jude and Revelation were not widely accepted by the Church until 350. 14 of 27 New Testament books were not mentioned until around AD 200, including Acts, 2 Corinthians, Galatians and Colossians.

Today’s Church shouldn’t be expected to look like the primitive Church if it is a living, vibrant, spiritual organism. But the early Church does already look very “Catholic.” What we don’t find in the early centuries is a “statue,” doomed to be increasingly encroached upon by the “pigeon droppings” of a “corrupting” Catholicism, as is imagined by Protestants of the anti-Catholic variety.

Blessed John Henry Cardinal Newman (1801-1890), in his Essay on the Development of Christian Doctrine (1845), the one indispensable work on this subject, pointed out that notions of suffering, or “vague forms of the doctrine of Purgatory,” were virtually universally accepted in the first four centuries of the Church, whereas, the same cannot be said for the doctrine of Original Sin, which is agreed upon by Protestants and Catholics. Purgatory is not a later “corruption,” but was present early on and merely developed. But Original Sin was equally subject to development.

If it be true that the principles of the later Church are the same as those of the earlier, then, whatever are the variations of belief between the two periods, the later in reality agrees more than it differs with the earlier, for principles are responsible for doctrines. Hence they who assert that the modern Roman system is the corruption of primitive theology are forced to discover some difference of principle between the one and the other.

This is true whether the theological considerations are those agreed upon by all, such as the divinity of Christ, the two natures of Christ, the Trinity, the Holy Spirit, and Original Sin, or those doctrines denied by all or most Protestants, such as the Marian dogmas, Purgatory, the papacy, the Real Presence of Christ in the Eucharist, the Communion of Saints, priestly absolution, baptismal regeneration, the Sacrifice of the Mass, etc.

Corruption can just as easily consist of “subtraction” as “addition.” One could say that an automobile was “corrupt” if the owner decided that it would run better with half its spark plugs, watered-down gas, no rear brakes, one headlight, three quarts low on oil, etc. Protestantism’s charges of Catholic “corruption,” then, only come back to incriminate itself, too, since it no longer holds many doctrines which were widely believed in the early Church.

The idea of doctrinal development provides, I believe, the key for understanding why the Catholic Church today often appears on the surface as very different from (and contrary to) the early Church.