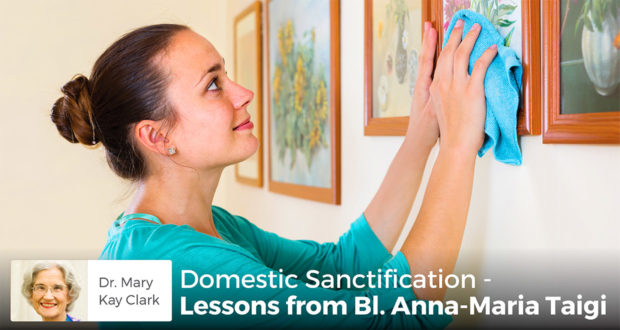 Dr. Clark introduces Blessed Anna-Maria Taigi, who is a sign of encouragement and a sympathetic heavenly intercessor for wives and homeschooling mothers.

Many of us homeschooling mothers would like to ask for spiritual help from a saint who went through some of the same experiences that we are going through.

Blessed Anna-Maria Taigi was a mother who faced the daily struggle of balancing responsibilities with children, husband, and work.

Anna-Maria was born in 1769 and lived in Rome. Her parents were extremely poor, as both were servants in a nearby castle.

Anna went to a Catholic school for only two years, where she learned basic reading, writing, and religion, but mostly was trained to prepare food and sew. As a young teen, she worked briefly in a sewing shop, but soon obtained a job as a servant with her parents in the nearby castle.

Anna made her First Confession at seven and her First Communion at thirteen. In spite of their poverty and long hours of work, the family attended early morning Mass almost daily. Anna attended weekly catechism class at the local church, and was confirmed in the great St. John Lateran Church.

Eventually, the noblewoman for whom Anna and her parents worked arranged Anna’s marriage to a young man who also worked in the palace.

Anna and her husband were provided with servants’ quarters, a small set of rooms adjacent to Anna’s parents’ home. Over the next fourteen years, Anna had seven children, and “was herself the principal instructress of her little ones.”

In addition to living in deep poverty and meeting the demands of her daily job, Anna always strove to please her perpetually dissatisfied husband, who insisted that she fix his meals or mend his clothes no matter how late at night. 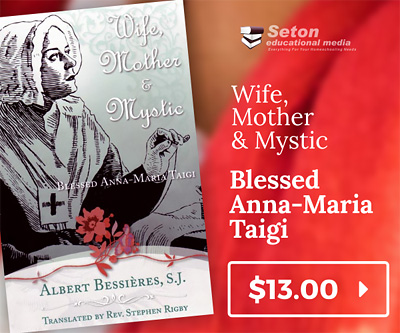 His difficult personality was observed by the children and neighbors, but Anna was known for her self-renunciation.

Anna went beyond simply accepting her difficult life. She inspired her family members, including her complaining parents, by keeping a happy face and an attitude that God was in charge. Not only did she take her children to daily Mass, she led them in daily recitation of the family Rosary.

Though she could read and write very little, Anna knew the catechism well, and regularly quoted it to her children. Every night at bedtime, she would give her children a kiss and make a Sign of the Cross on their foreheads.

Anna taught her children by word and example to live a life of sacrifice. When there was a shortage of food, she would go without so that her family could eat. One of Anna’s daughters testified that, for punishment when they misbehaved, Anna “preferred to make us go without our dinner or to put us on dry bread.”

After Sunday Mass, Anna would take her girls to a nearby hospital “to train them in the ways of charity.” Another of Anna’s daughters reported that her mother used to say: “Laziness is the mother of all the vices.”

Whenever a priest came to the house, Anna kissed his hand and made the children do the same. She had special rules or “precautions” for the girls because she could see “happenings frequent and serious enough to put her on her guard.” When one of her daughters wanted to marry, the young man was made to “frequent the house” for two months while Anna herself was always present.

After Anna died, one of her confessors related that she “adapted herself to the character of each [of her children]; she cherished their good qualities, mildly corrected their bad ones and thus trained her children perfectly.” Her husband testified: “She gave unceasing thanks to God for having caused her to be born in the Catholic Church, and she taught her children to praise Him for so great a favor.”

After her death, several of her confessors revealed the messages that Anna had received from Jesus and Mary. One priest reported that Jesus appeared to Anna and said, “I shall save your children for they are blood of your blood.

Moreover, they are poor, and the poor are my friends. Yes, I shall save them, though they have many faults.” One of her earliest spiritual advisors stated that a voice had told him to “take notice of that woman…I am calling her to sanctity.”

The Blessed Mother reminded Anna, “You must be devoted above all to doing His will and submitting your own constantly to His in the state of life to which it has pleased Him to call you…Remember, it is far more meritorious to renounce one’s own will and submit oneself entirely to the will of God than to perform the greatest bodily mortifications.”

There is so much more in the story of Blessed Anna-Maria as recorded by her family, her friends, and her confessors. Her life is a wonderful example for wives and homeschooling mothers.

Today, Anna’s incorrupt body lies in repose in the church of San Crisogono in Rome, where she remains as a sign from Jesus to encourage us in our vocation. Blessed Anna-Maria Taigi, pray for us.