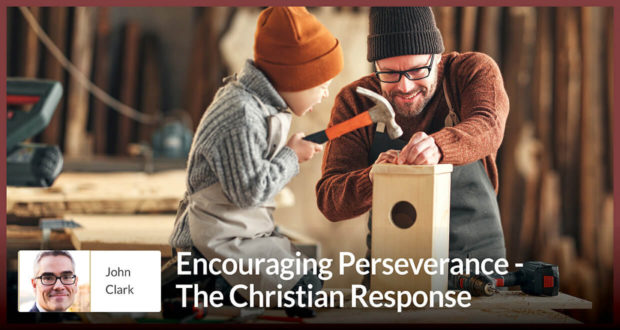 Our Christian response must be to encourage and help those around us persevere, to get up and fight the good fight. After all, we’re in this fight together.

During the process of writing a new course for Seton called “Virtue-Based Leadership,” I have spent considerable time reading Aquinas’ Treatise on Virtues. In my research, I have come to appreciate the relationship between encouragement and the virtue of perseverance.

When we consider Cicero’s definition of perseverance as “the fixed and continued persistence in a well-considered purpose,” it becomes easy to see the essential role that this virtue plays in the spiritual life. In fact, we must pray not only for the grace for “fixed and continued” but for final perseverance—that is, perseverance in the state of sanctifying grace to the end of our lives.

Of course, being fallen creatures in a fallen world doesn’t make this easy.

Nor does it help that the devil hates us. Whereas Jesus was a carpenter and used tools to build, the devil uses tools to destroy. If temptations of lust don’t work, he’ll try gluttony. If the tools of gluttony don’t work, he’ll try greed. If that doesn’t get him anywhere, he’ll try anger and envy and sloth. And he’ll mix in a heavy dose of pride along the way. There are those souls who fall easily and eagerly; these are the souls who embrace sin even before the devil has time to unlatch his toolbox.

But then there are those valiant souls from whom the devil can expect a fight. Every. Single. Time.

Armed with grace and the gifts of the Holy Spirit, these men and women punch well above their weight. These souls may stumble and fall to the ground, but amidst the shouts of the world to “Stay down,” they listen instead to the encouraging choirs of Heaven who remind them the fight is far from over. Saint Francis de Sales commented that if Adam and Eve had immediately repented of their sin, they would have crushed the serpent right there in the Garden—and so they would have pulled themselves up by the ropes of repentance. And continue the fight.

It is no accident that, in his First Letter to the Corinthians, Saint Paul uses a boxing analogy when discussing the spiritual life, writing: “I do not box as one beating the air.” The opponents are not imaginary; the fight is real.

Sadly, the third response is uncommon. Many of us go through each day with little encouragement by the “audience.” Instead, we suffer discouragement. And it’s worth noting that discouragement is not only about what we say; it’s about what we don’t say. People are desperately trying to climb back up the ropes, but we can’t find it in our hearts or on our lips to say anything. Maybe we feel like it doesn’t matter. Doesn’t it? As Father Laurence Lovasik writes, “There are few things that resist grace so much as discouragement. Many plans for God’s glory have failed because there was no bright look or kind eye or kind word to support them.”

Scripture agrees. In the tenth chapter of Paul’s Letter to the Hebrews, Paul implores us to “consider how to stir up one another to love and good works, not neglecting to meet together…but encouraging one another, and all the more as you see the Day drawing near.” The message is clear: encouragement is the mother’s milk of perseverance.

In the homeschool life, it is imperative that we encourage each other to persevere in virtue. We must encourage our children, our parents, our husbands and wives, our brothers and sisters, the priests in our lives. We must encourage all those around us. Those mired in a struggle need to hear the cheers and encouragement of the audience.

And the audience is us.