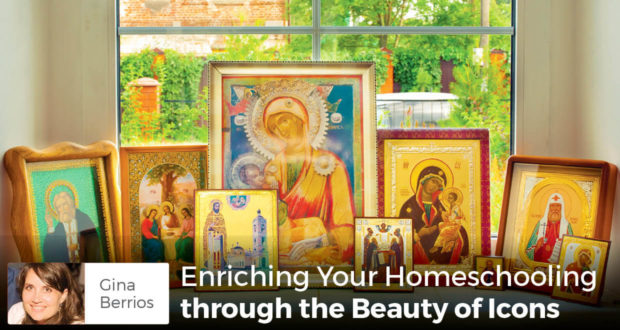 Enriching Your Homeschooling through the Beauty of Icons

Gina Berrios shares what she learned from an iconographer about icons and offers ways these holy images can enrich your homeschooling and prayer life.

A few years ago, I received a Christmas card that had on it the icon of Simeon. This icon was moving.

As I showed it to each member of my family, each commented on its stunning beauty. My kids fought over who got to hang the card on their bulletin board.

The icon was written (not painted, because iconographers write the scriptures without words) by my friend Peggy Salisbury, who was also the creator of this Christmas card. I called her to tell her how much her icon had affected my family. Several of her icons hang in our parish hall. I did not realize she had more hanging in her home.

She invited me over to see them all. We have discussed icons and her work as an iconographer. I would like to share why this form of prayer and catechesis is still so relevant for us today.

Icons are a beautiful form of teaching the faith we have as Catholics. Really, it is a gift for us that has been preserved by the Eastern Church, and it connects us to the early Church, who buried their dead in the catacombs and sometimes surrounded them with icons.

Icons are a useful way for us, as parents, to draw our children into the scriptures and give them a pictorial representation of the Word of God. As I learned from my friend Peggy, icons, which means “image” or “likeness”, are meant as a way for us to learn the stories of the Bible.

She explained that. just as the Word of God does not change, icons do not change. There is a set way to the colors and the symbolism and how icons are written. With icons, the iconographer is transferring the written word and passing on the tradition. How beautiful is this thought?

Icons originated in the early centuries of the Church, when the Christian population was largely illiterate. Icons were meant as a form of catechesis to explain the teachings of the Church. That is why the unchanging symbolism is so important.

Peggy explained that, for icons of the Blessed Mother, Mary always has three stars, one on her forehead and one on each shoulder. This represents her virginity before, during, and after the birth of Christ. Icons of Jesus show Him with His hand held in the same position, symbolizing His humanity and divinity.

An icon of someone wise, like St. John, would show him with an enlarged forehead, representing his wisdom. In an icon with St. Joseph, you will see his arm wrapped in the sleeve of his robe, symbolizing humility. In icons of the Nativity, the Christ child is swaddled tightly, almost looking like He is wrapped in burial garments, and placed in a manger that looks like a tomb. This symbolizes He was born so He would die. A ray from Heaven (the Holy Spirit) pierces the child, just as a sword would pierce the heart of Mary.

I have found kids respond to icons. We have icons behind the altar at my church. I took my kids to a talk Peggy gave about the symbolism of the icons. My kids wanted to get as close to the icons as possible to see all the details she mentioned. They remembered most of these details as they were telling their dad about it that night. They understood the theology being taught through these holy pictures.

Icons are important for catechesis. There is a reason some churches, in places like Romania, have large icons on the outer walls of their monasteries. In medieval times, the peasants working in the surrounding fields could gaze at them and encounter the Word of God and teachings of the Church. They were a source of meditation and prayer.

She told me how she feels about her icons: “In the same way that one places pictures of beloved family members where they can be seen, the icons in my home are a continual reminder of my spiritual family, who are so important to my faith. They provide comfort and calmness to me. They strengthen my faith and serve as a source of contemplation for my prayer life.”

Consider introducing your children to some saints represented in icons. Consider a study of them in your homeschooling. For kids who are more visual in their learning style, you may see this as a way for their study of religion to come alive for them.

For artistic kids, what a beautiful way for them to intertwine their art with their prayer life as they study the meaning of iconography. For you, consider it another way to enrich your own prayer life as you contemplate the Gospel message in icons.

Let us thank God for the beautiful traditions, preserved by the Church and handed down to us through the centuries.