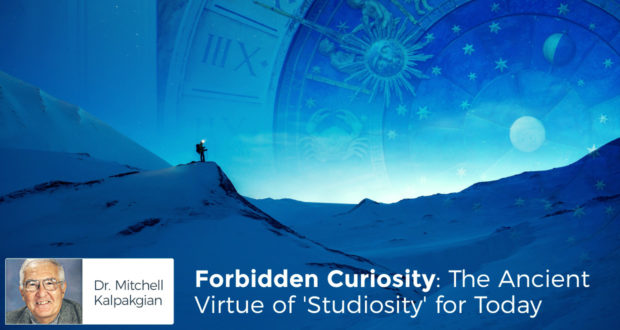 Forbidden Curiosity: The Ancient Virtue of ‘Studiosity’ for Today

The past is rife with men consumed by a curiosity for forbidden secrets. Dr Mitchell Kalpakgian explores the forgotten virtue of ‘studiosity’ as a solution.

Eavesdropping is a vice of listening to conversations that are not intended for the ears or knowledge of others.

Gossiping is a vice of talking about people that spreads rumors and lies and disseminates information best left unsaid.

‘Voyeurism’ is a vice of seeing that invades privacy and intimacy and ignores curtains, doors, and locks.

Touching and opening closed, wrapped boxes that conceal their contents is the vice of tampering with hidden gifts or surprises that await the proper time and occasion.

Just as the five senses can overstep bounds and trespass into inviolable territory, so the mind ignoring restrictions can venture into treacherous dangers. The story of Pandora’s Box applies not only to disobedient children but also to intelligent thinkers who let their desire to know grow into the vice of curiosity.

In Hawthorne’s A Wonder Book, when Pandora opened the box, she found “the whole family of earthly Troubles” that included “evil Passions,” “a great many species of Cares,” “a hundred and fifty Sorrows,” and “Diseases, in a vast number of miserable and painful shapes.”

Likewise, man’s quest for knowledge can exceed the limits that safeguard his happiness and morality.

The virtue of temperance applies not only to matters of eating, drinking, and pleasure but also to the subject of learning.

The classical-medieval world distinguished between studiosity and curiosity, the legitimate natural desire for truth that satisfies the hunger of the mind for essential knowledge and brings the joy of learning as opposed to the disordered, restless desire for illicit, forbidden, or harmful knowledge that does not lead to human or heavenly happiness.

In Milton’s Paradise Lost, Satan tempted Eve to eat of the forbidden fruit from the Tree of Knowledge by the lure of curiosity:

Why, then, was this forbid? Why but to awe,
Why but to keep ye low and ignorant,
His worshippers; he knows that in the day
Ye eat thereof, your Eyes that seem so clear,
Yet are but dim, shall perfectly be then
Op’n’d and clear’d, and ye shall be as Gods,
Knowing both Good and Evil as they know.

Gaining forbidden knowledge, Eve learned that a person does not need the experience of evil in order to have an appreciation for the good.

Innocence is the pure state of having knowledge of good and evil, without the need for participating in sinful pleasure to gain truth.

Although wisdom comes from experience, the higher state of innocence possesses a greater wisdom that loves the good without the first-hand knowledge of evil.

All who indulge in the sin of curiosity inevitably suffer tragedy, lose more than they gain, and pay a price they lament.

Satan beguiled Eve, the witches lured Macbeth, and Mephistopheles tempted Faust with the bait of curiosity, the enticement that knowledge per se is always good and desirable—no matter if it is pernicious, hazardous, or diabolical.

Their experiences proved to them the harmfulness of the uncontrollable, indiscriminate desire to know that precipitated their fall from high to low. Satan whetted Eve’s intellectual appetite to be “as Gods” with an increase of knowledge that surpassed man’s limits established by God.

Macbeth listened to the enticing voices of the witches who lured him with false prophecies of the future: “King thou shalt be.”

Mephistopheles bargained with Faustus, offering him the secret powers of magic to gratify all his desires in exchange for his soul. Although they all viewed higher knowledge as liberating and enlightening, curiosity led to punishment or damnation.

These ancient stories forewarn man to beware of exploring esoteric secrets concealed from man for good reasons. To enter the realm of forbidden knowledge—magic, astrology, alchemy—bypasses and circumvents a natural path to a good end and follows a devious course to gain some illicit desire.

Instead of waiting for the future to unfold in gradual degrees and reveal its mystery, the astrologist presumes to foresee upcoming events and gain an advantage to overcome the unknown.

Instead of working honestly to earn his fortune in daily labor, the alchemist deceives to earn riches by concocting the elixir that transforms base metals into gold and produces instant wealth.

Instead of learning in slow degrees and advancing in natural stages of gradual development, the curious desire to possess the mystical arts that bypass the traditional fields of knowledge.

Goethe’s Faust, a scholar with doctoral degrees in law, medicine, philosophy, and theology, finds these realms of human learning insufficient for his passion for infinite knowledge.

Curiosity breeds restlessness and knows no limits. No form of knowledge is off limits, no matter how deadly or destructive. Man’s quest for infinite knowledge into more secrets and more regions of inquiry tempts him into assuming godlike powers.

If God is omniscient, man presumes to foresee the future with astrology. If God is fruitful and creative, man imagines he can make and produce by the power of magic. If God creates light from darkness and Adam from dust, man fantasizes about multiplying gold from metal and producing wealth with alchemy.

God’s miracles are matched by man’s magic. The curious never reach a limit to knowledge or admit insurmountable boundaries that cannot be crossed.

They never acknowledge the mystery that surrounds the created world that resists human interference and manipulation. To the curious, the mind is entitled to all knowledge, all experiments, and all information.

Instead of the education that proceeds with slow steps and acknowledges the virtue of temperance, the curious seek accelerated procedures, instant results, and immediate gratification.

This is the promise of all the magicians, witches, and devils who appeal to the vice of curiosity to advance the agenda of evil. Instead of liberating the mind with knowledge, curiosity darkens the intelligence by supplanting nature with magic, God with man, and miracles with superstitions.

Modern man also trespasses into forbidden regions when aspiring to a more advanced science and a higher consciousness in the name of research and progress.

Equally forbidden are all methods that violate the norm of the natural the human, and the moral and explore the unthinkable in the name of “knowledge”—the chemical killing of human life, the sterilization of fertile human beings, experimenting with human beings for medical cures, and separating human beings from marital union.

In the name of the “evolution” of the meaning of the U. S. Constitution, the Supreme Court’s decision to legalize same-sex marriage also follows the path of curiosity that ignores lawful boundaries.

In the name of a higher consciousness that transcends traditional morality and the universal meaning of marriage, legal thinking respects no limits and plunges into the darkest regions of sophistry to defy the moral barriers that define good and evil, healthy and disordered, true and imaginary, and wisdom and ideology.

Curiosity’s adventure into forbidden knowledge only repeats the original sin of Adam and Eve—purchasing knowledge at the cost of suffering and death.

The knowledge gained by curiosity does not liberate, enlighten, or advance the mind toward any higher knowledge but only leads it into the darkest regions inhabited by devils and witches.

It never leads to happiness or justice. On the contrary, the knowledge learned from studiosity leads the mind upward to the source of truth, light, and wisdom—the highest good.

This is the mind’s road to God that Plato, Augustine, and Boethius followed and that Dante summarizes in the last line of The Divine Comedy.

“The Love that moves the sun and the other stars.”’