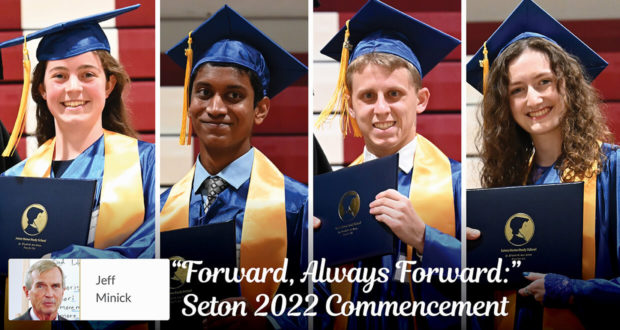 Given their accomplishments, and reverence for Christ and his Holy Church, these young men and women will surely become, “leaven of the culture.”

On Saturday, June 18th, the gymnasium at Warren Country High School was almost literally packed to the rafters as friends and family gathered to watch 145 cap-and-gowned Seton graduates march across the stage to receive their diplomas.

After the entrance procession of the graduates into the gym, Seton’s Deacon Gene McGuirk opened the ceremonies with an invocation. He reminded the graduates and the audience about the recent feast of Saint Barnabas, how this apostle had defended Saint Paul, and that we, too, should always stick up for our faith. 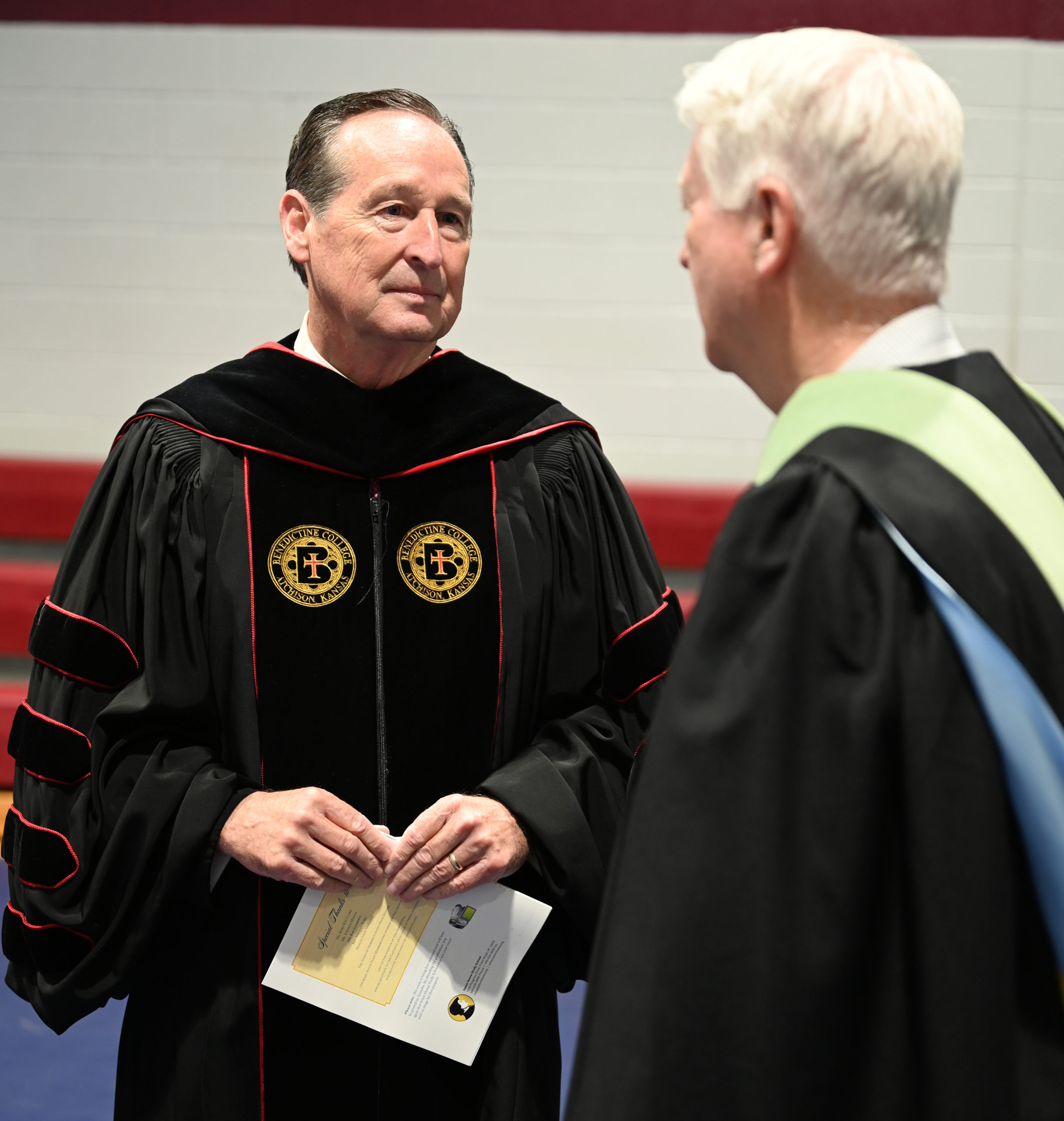 Dr. Ray Guarendi, a clinical psychologist well-known to many Catholics for his radio and television shows and his wit and humor as a speaker, then offered welcoming remarks.

Leaven of the Culture

Fifteen years ago, he remarked, 35 graduates had attended the first Seton commencement ceremony.

Today the 145 young people who had come here on this occasion had traveled from 36 different states, Canada, the Philippines, Costa Rica, and the United Kingdom.

He then congratulated the graduates for all their hard work, remarking that they were often more mature and more civilly active than their peers and were the “leaven of the culture.”

Dr. Mary Kay Clark, whom Dr. Guarendi introduced as “one of the great pioneers in the homeschooling movement,” addressed the gathering by video, congratulating the students on their hard work and love for the Faith. She praised their parents for all their effort and passion for their children’s education.

Near the end of her address, Dr. Clark told the students, “Whatever you face, remember what you have learned. Hold tight with all your strength to Christ and your Church…No matter what problems you face, God has the answer.” She cited Saint Paul’s words from his letter to Timothy, in which he spoke of fighting the good fight and running a race, and said, “Never lose track of that finish line.”

Up next at the podium was Mr. Stephen Minnis, president of Benedictine College in Atchison, Kansas, since 2004, and an attorney and educator with a long list of honors. Mr. Minnis urged the students to “strive for greatness,” reminding them of Pope Benedict’s words, “the world promises you comfort,” but we were made for greatness. Someday, Mr. Minnis said, you’ll be faced with tough choices. Choose greatness over comfort.

In his second point, Mr. Minnis brought up one of Benedictine College’s slogans: “Forward, always forward, everywhere forward.” He told the graduates that when faced with adversity, don’t look back. Move forward.

His final advice was to have faith and rely on God. He compared this faith journey to a tandem bicycle, telling the students they should occupy the bike’s back seat, working and striving as hard as they can, but always putting God in the front seat. 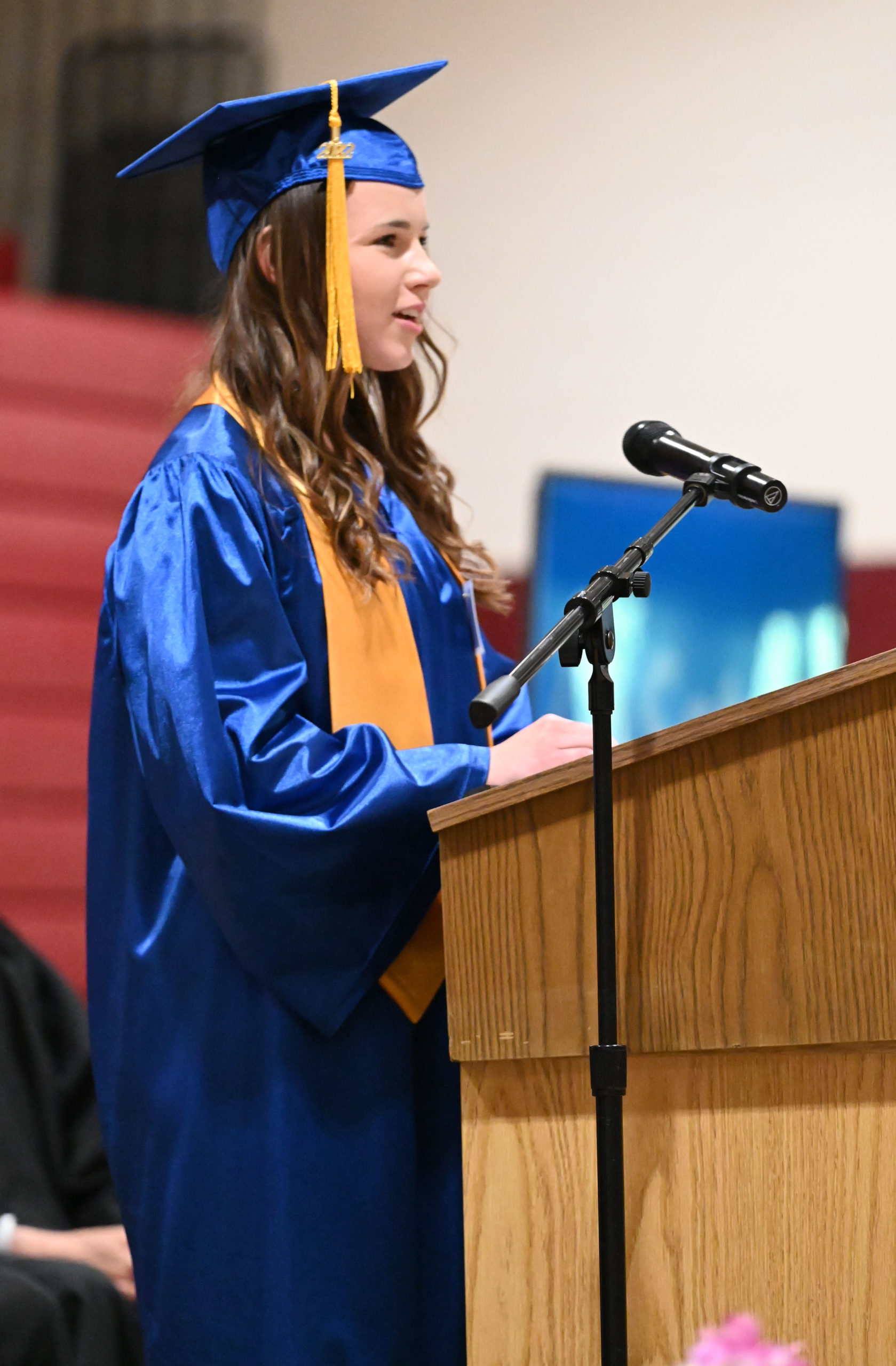 Following this talk were addresses by two Seton students, Lexie Gibson and Peter Young. Miss Gibson began by thanking her parents for all their gifts of time and work in her education.

She then broadened that appreciation to the other graduates by saying, “Our parents fought hard to give us a strong Catholic foundation, but now it’s our turn.” 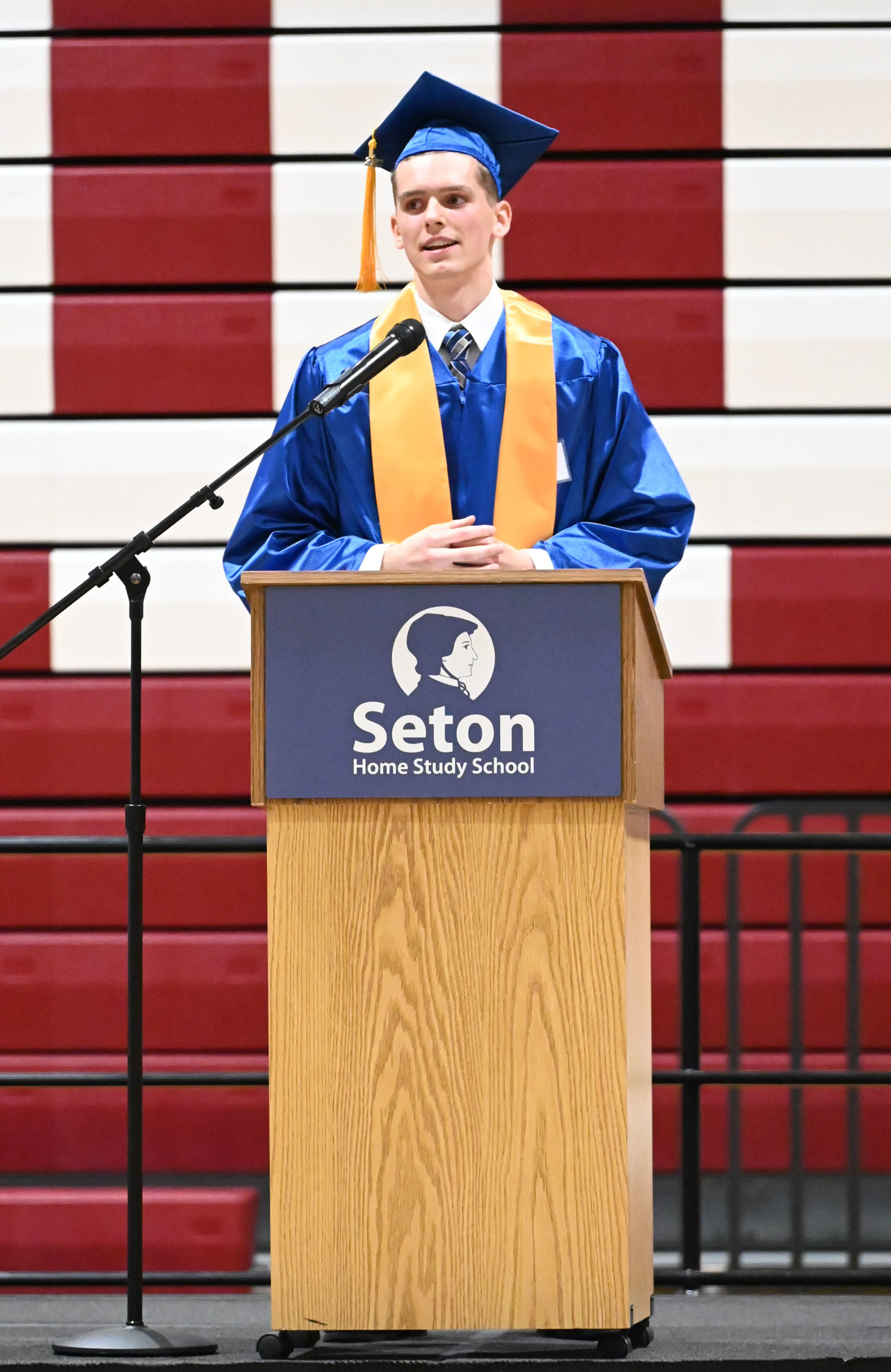 She concluded her remarks by reminding the audience, “Whatever your call is, let it be your journey to heaven.”

Mr. Young used an axiom he’d found online as the central point of his talk: “There’s no such thing as bad weather. Only bad clothing.” He used this metaphor to explain that his fellow graduates may face hard times but will pass through those storms if they live in the Faith and surround themselves with family
and friends.

Graduate Thérèse Brons then offered a special remembrance for Seton student Isabella Auer, a member of the Writer’s Club and Catholic Harbor, who died of cancer in 2020. Sharing her warm memories of her friend, Miss Brons said, “She lived and loved, and gave from her whole self.”

Before calling each student by name to the stage, where Deacon McGuirk presented them with a diploma, Dr. Guarendi offered recognition to the parents, reminding them that they were the number one factor in their students’ achievement. 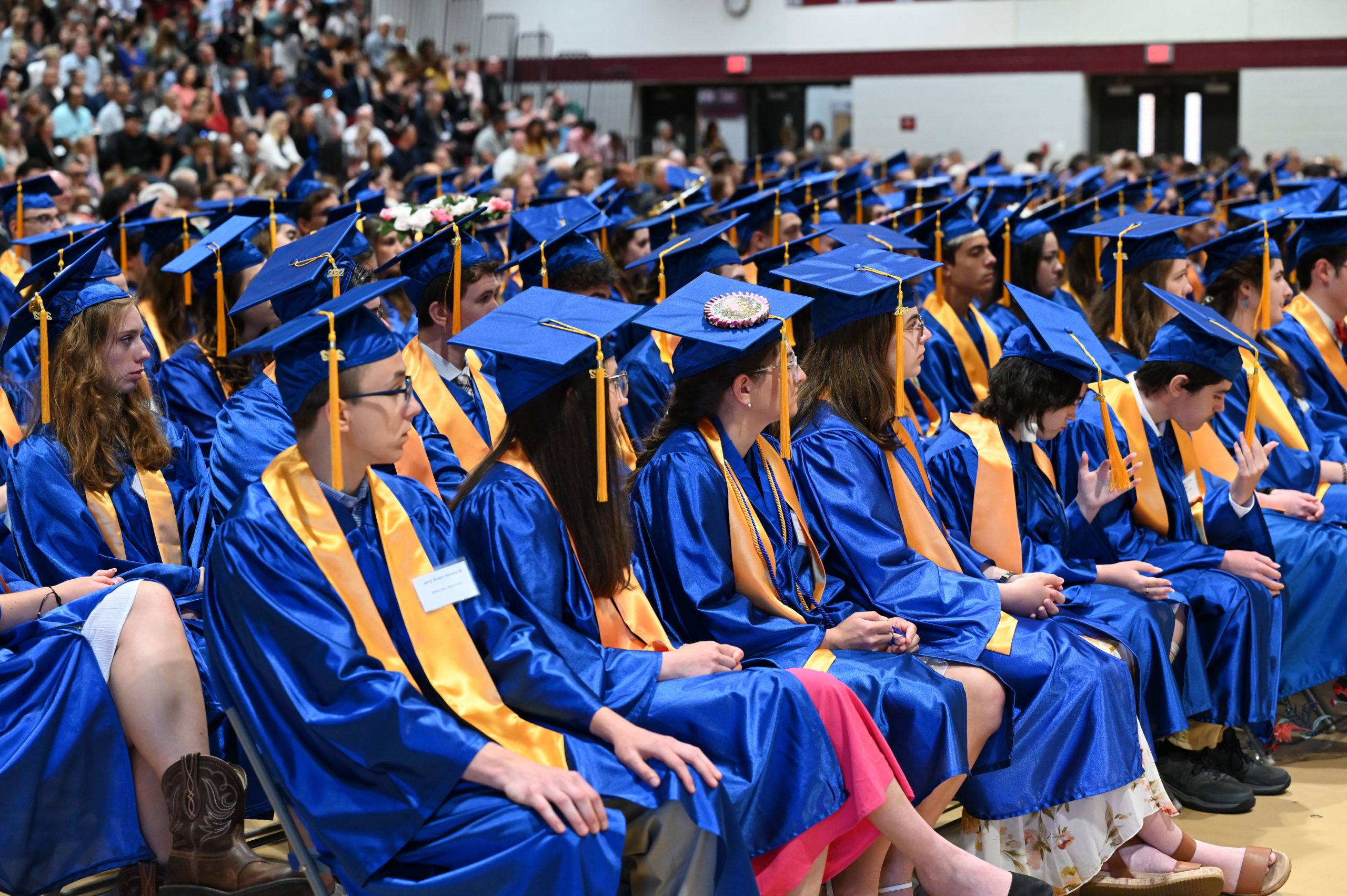 Then came the conferral of diplomas, followed by a virtual presentation of several dozen graduates unable to attend this ceremony and the closing benediction by Deacon McGuirk.

After the graduates had gathered outside for a class picture—a professional photographer was also available for individual and family photos—all the attendees headed to the cafeteria for a delicious spread of food provided by Front Royal’s Downtown Catering. This day of festivities ended with a dance that evening in the school gymnasium.

Given the accomplishments of these students—the graduation program contained mini-biographies of many—and their reverence for Christ and his Holy Church, these young men and women will surely become, as Dr. Guarendi predicted, “leaven of the culture.”

Congratulations, then, to all these hard-working graduates and their devoted parents!