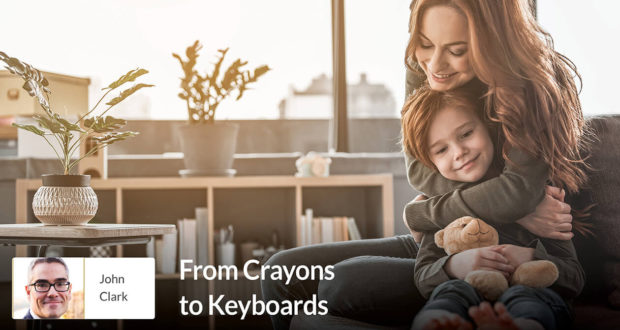 From Crayons To Keyboards

Beginning in kindergarten, the infusion of Catholic Faith and building upon what students have already learned, has been an unwavering commitment at Seton.

To pass Seton’s online American Government course, each student must write a rebuttal to the infamous Roe v. Wade decision. Specifically, the students must explain how Judge Blackmun’s majority decision was legally and constitutionally incorrect.

Over the years, thousands of students have passed the class, and we have seen some magnificent papers. It is no exaggeration to say that some of these papers are not merely on a college level but rival the professionalism of America’s top legal journals. The logic and insights of the students routinely pass those of Mr. Blackmun. In many ways, that course and that assignment are a microcosm of Seton’s educational philosophy.

I wrote this course several years ago, and I have graded more than five hundred submitted term papers during the past year. At first, you might consider that a grim thought: grading term papers about abortion for hours on end.

I’ll admit, rarely does a day pass that I don’t think about the case and peripheral issues like quickening, ensoulment, or privacy. I wonder how the ultrasound picture of a preborn baby appeared on the cover of Life Magazine in 1965, yet in 1973, Judge Blackmun seemed unaware that ultrasound technology even existed. I pray for the babies who died as a result of this case.

Never Look at the Waves

And what is it they have learned?

To answer that question, it helps to look back to Seton’s early days in the mid-1980s. Back then, when my mother and the Seton staff sat down to write a K-12 curriculum, it was a daunting task that seems even more daunting in retrospect. Had she stopped to think about the quixotic nature of it all, she might have wavered. But she never stopped and never wavered. I discovered a certain genius in that: Never look at the waves.

It’s little wonder why my mom worked long hours: she had 13 years of curriculum to help write. But I remember well, as I stood by the copier at the age of 15 and collated lesson plans, that these men and women were driven. They were driven by the grace of Faith, always keeping one particular thing in mind: every class, every subject, every grade must be imbued with the Catholic Faith.

From Algebra to Zoology, from Handwriting One to History 12, Seton would be a Catholic program. It would be enlivened with the light and truth of Faith.

The infusion of Catholic Faith has been an unwavering commitment.

When I began to write the American Government course, I spent a few weeks reviewing the Civics courses in both private and public schools. In my research, I noticed something rather odd: none of these courses discussed the virtue of justice. Considering the role of justice in society, this omission is shocking.

But neither did these courses bother to define “law” or “rights” or “liberty.” None of them even discussed the nature of government—as in, why do we have government at all, and where does government’s authority originate? These courses simply explained that there are three branches of government and that a bill can become law. They never discussed why a particular bill should become a law.

The Seton course does not have those glaring errors and omissions. Instead, it addresses those thoughtful questions and builds upon what the Seton students have already learned, beginning in kindergarten.

The truths once written with colorful crayons in workbooks are now composed on keyboards in black and white. In all that time, the message has developed, but it has not changed.

By the time the Third Quarter Roe v. Wade assignment comes along, they’re ready and able to write a dissenting opinion against America’s most notorious court decision.

As high school students, they write those assigned papers for their teacher. But the day is coming when their arguments will be heard across America and across the world.